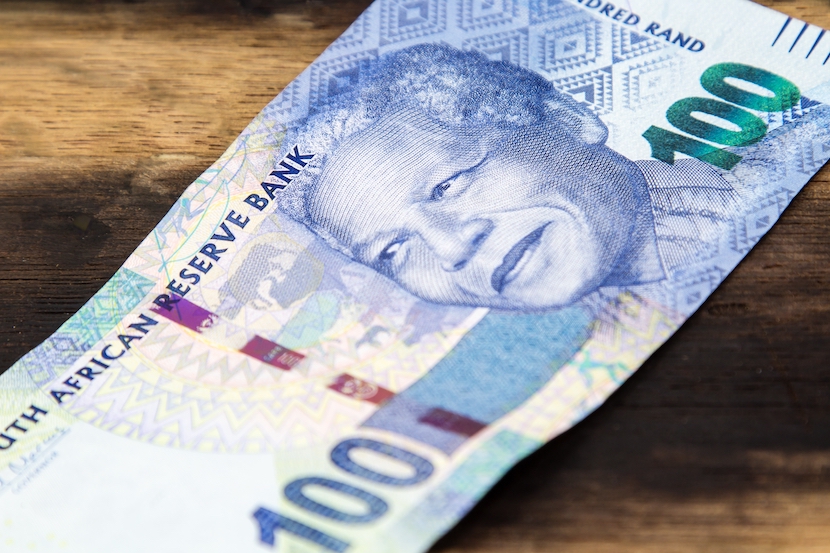 (Bloomberg) – Deadly riots. Sky-high unemployment. A surge in virus infections. Add to that rising US inflation and prospects of Federal Reserve tapering, and South Africa’s rand is in a tight place.

Investors are concerned that the unrest – the sternest test yet to President Cyril Ramaphosa’s authority – will derail South Africa’s efforts to rebuild the economy in the wake of the pandemic. Citigroup reduced its overweight South African government bond position in its model portfolio and recommended selling the rand. 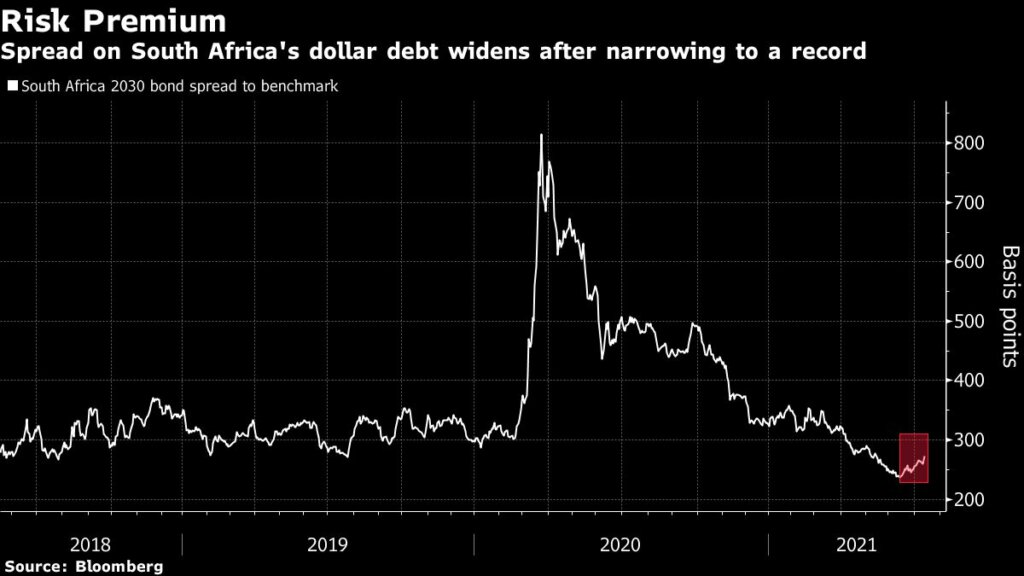 “The riots are a blow to Ramaphosa and investors alike and if they persist, they could weigh on the reform course, the economic outlook and also the President’s legitimacy,” said Trieu Pham, a London-based emerging markets strategist at ING Bank. “It’s been an absolutely impressive year until now for South African risk assets, so at these levels some caution is warranted.”

The South African currency declined for a third-straight day on Wednesday to 14.78, the weakest since April 1. Options traders see an 81% probability that the rand will slide to 15 per dollar this quarter, up from about 34% in early June. The Taiwanese dollar and Chinese yuan eclipsed the rand on Tuesday as this year’s top emerging-market performers.

Selling the rand is becoming one of the favoured strategies for investors seeking to profit from relative-value trades as a spike in Covid-19 cases keeps expectations for tighter monetary policy at bay. Pimco is going long in the currencies of Russia and Brazil – which have raised interest rates this year – against those that aren’t getting a lift from policy tightening such as the rand. Deutsche Bank AG is advising investors to short the South African currency against the Russian ruble. 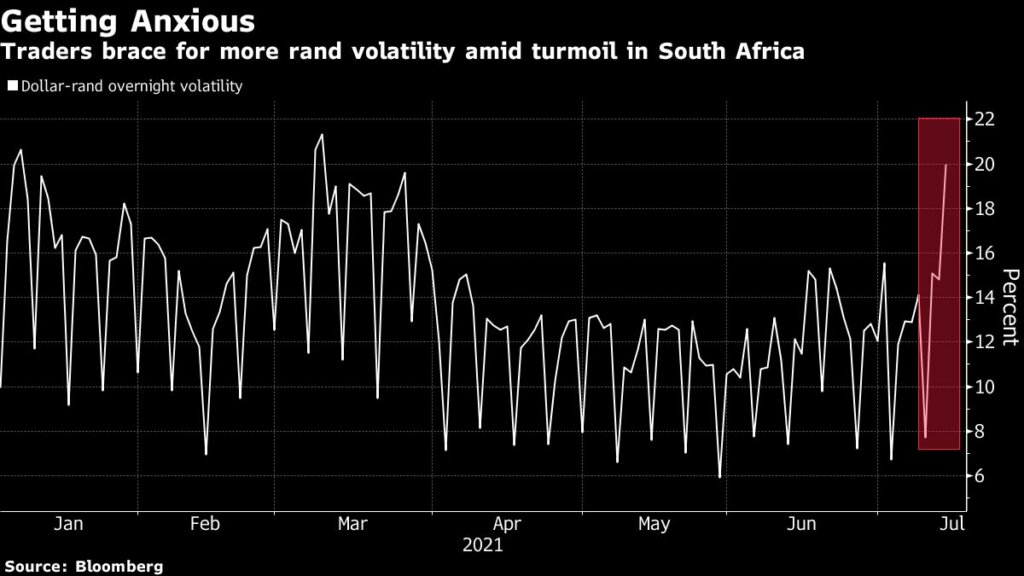 Meanwhile, the cost of hedging against rand declines is rising. Three month risk reversals – the premium of options to sell the currency over those to buy it – have jumped 20 basis points this week. Overnight implied volatility climbed to the highest since March.

“I definitely see more downside risk for the rand,” said Christie Viljoen, an economist at PWC based in Cape Town. “After a few months running strong against the dollar, the past few weeks has reminded investors of South Africa’s fundamentals.”

Outflows from South Africa’s stock and bond markets have accelerated since June. Foreign investors have dumped the equivalent of a net $7bn of securities this year, according to JSE data compiled by Bloomberg. That’s putting pressure on the current account, negating some of the benefit of a ballooning trade surplus. It’s also keeping the government’s borrowing costs high at a time when it’s struggling to reduce a budget deficit of more than 11% of gross domestic product. 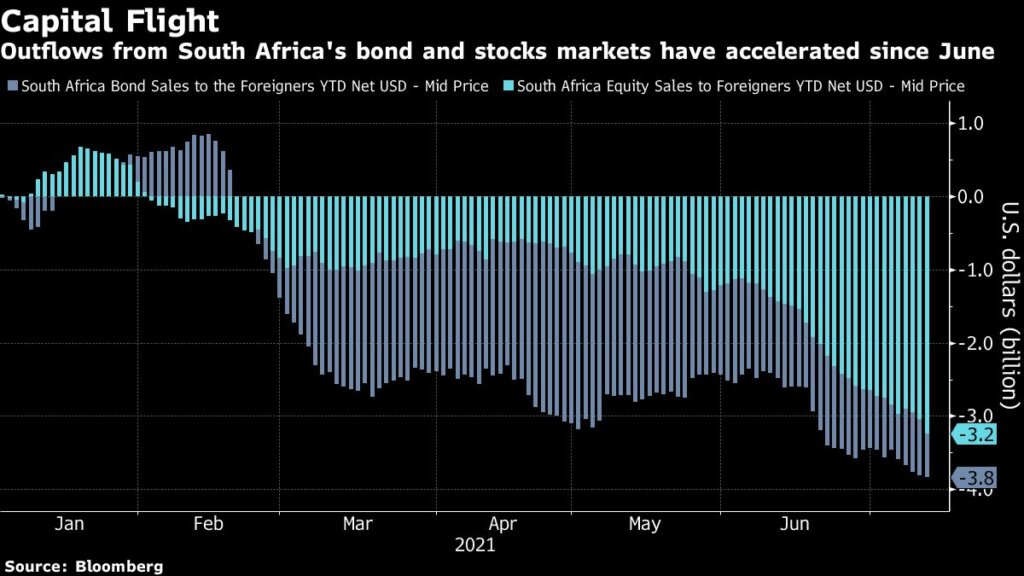 While the benchmark FTSE/JSE Africa All Share Index has been buoyed by strength in “rand-hedge” companies that have income from abroad and benefit from weakness in the local currency, the stock market hasn’t escaped unscathed. Bank shares have been hard-hit by the fallout from the violence and the currency’s battering, with an index for the sector plunging 4.5% on Tuesday, the steepest drop this year.

The selloff may be a temporary blip, said Gustavo Medeiros, deputy head of research at Ashmore Group in London. While the unrest can lead to more economic problems, it may not last, he said.

“There isn’t a strong case for protesting in the first place, so this may well be a temporary event,” Medeiros said. “The external confidence in South Africa will remain strong unless we see a strong selloff in commodities.” 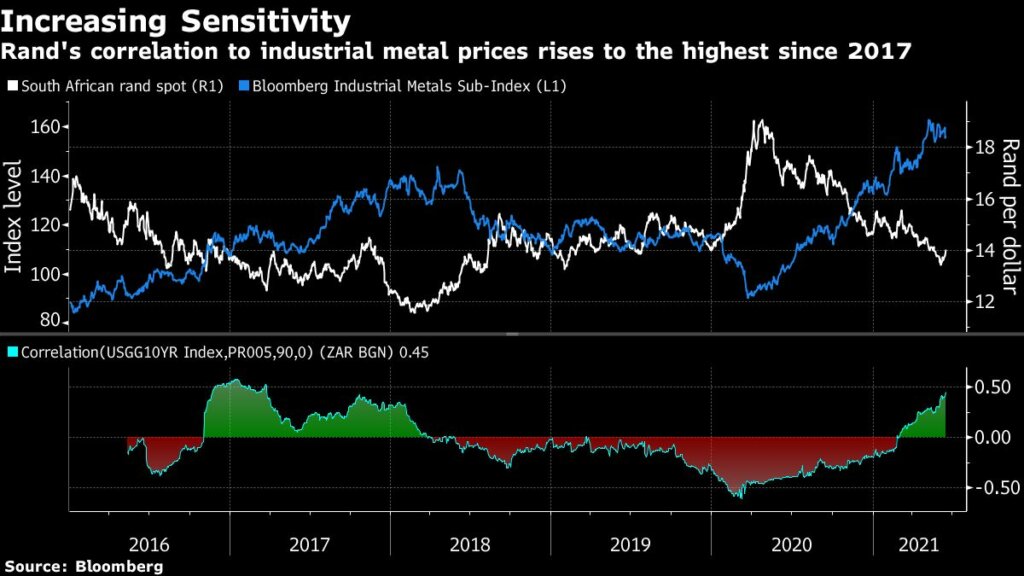 But with the “buy-everything rally” over, it would take a strong turnaround in South Africa’s fortunes to entice investors back, according to Ian Beattie, co-chief investment officer and head of emerging markets at NS Partners in London. Investors are looking for “quality and growth,” and South Africa has neither.

South Africa is “among our largest underweights,” Beattie said. “It will be impacted by a weakening growth environment globally, the U.S. dollar rally and negative sentiment for positioning toward emerging markets. It continues to suffer terribly from Covid-19 and has low vaccination deployment, and the political unrest and riots are unsettling.”