Following an ‘extremely cold’ warning from the South African Weather Service, Eskom is urging South African’s to reduce electricity usage. While load shedding hasn’t happened in nearly a month, Eskom said in a statement that “the cold front will increase the demand for electricity thereby putting pressure on the power system.” The state-owned entity has also said that the strong weather puts the electricity network “at risk”, which may leave some without electricity for prolonged periods of time. However, the recent violent protests affecting KwaZulu-Natal and Gauteng may also affect power supply, with Eskom noting that technicians in these areas will be grounded due to the danger they may find themselves in. “Safety of our employees remains our priority and therefore where we feel our employees are not safe, we will withdraw them immediately,” said Monde Bala, distribution group executive at Eskom. This article was first published on MyBroadband. – Jarryd Neves

“Eskom has not implemented load-shedding since 13 June 2021 due to some improvement in the performance of the generation fleet and the system is currently performing relatively well,” the power utility said in a statement on Monday.

“However, the cold front will increase the demand for electricity thereby putting pressure on the power system.”

The utility promised to communicate promptly should there be any significant changes to the performance of South Africa’s grid.

Eskom also warned that it is expecting serious challenges in the Western Cape and Eastern Cape as strong winds, extreme cold, and heavy rainfall is expected to hit the provinces today.

“The inclement weather puts the network at risk and can affect the electricity supply of customers, potentially leaving some customers with prolonged periods without electricity,” it stated.

It said that it will prioritise response to faults based on their size and duration.

“Large faults on the MV and HV network that affect a large number of customers will be prioritised,” said Eskom.

“Faults that have left single customers without electricity supply for more than 48 hours will take priority, and thereafter, faults for more than 24 hours until the most recent faults.” 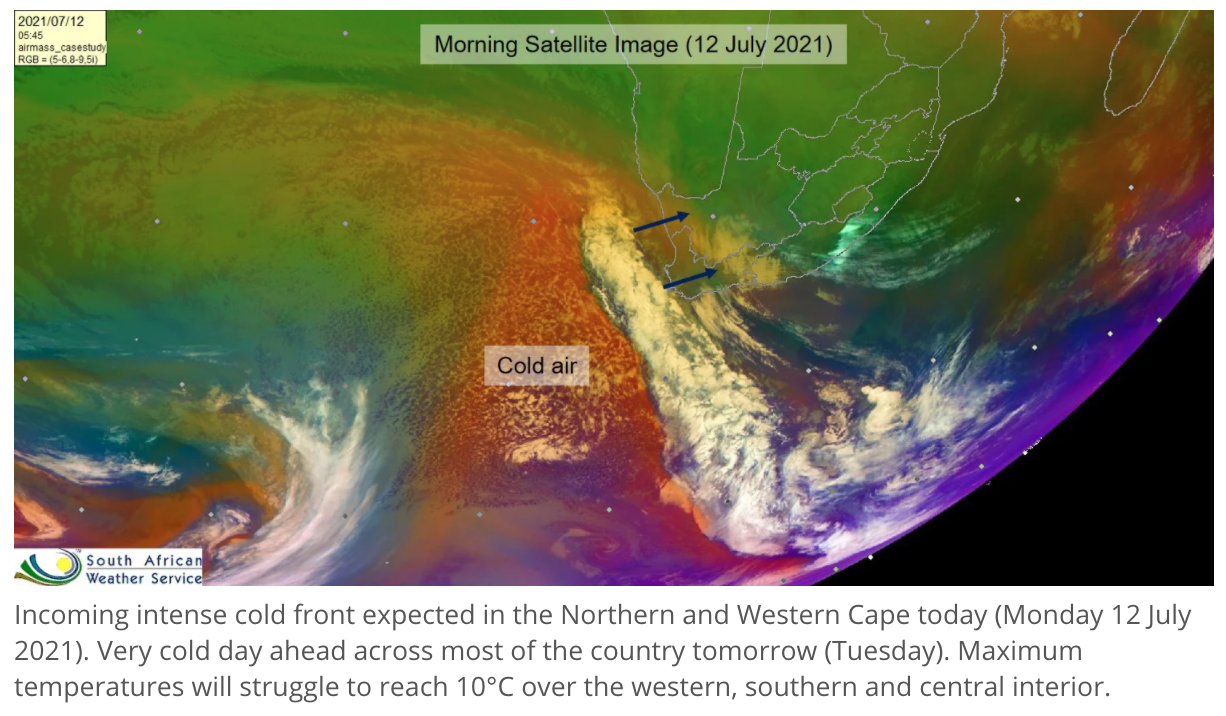 The South African Weather Service issued a warning on Monday that strong winds are expected across the Cape provinces and may result in property damage in some areas, following the arrival of a strong cold front.

This cold front will cause gale-force winds between Cape Columbine and Cape Agulhas and significant wave heights, from a south-westerly direction, picking up to between 4.5 and 6.5 m between Hondeklip Bay and Cape Agulhas during the morning hours, which is expected to spread along the south coast to Plettenberg Bay in the afternoon.

“Therefore, large waves will reach further up the shoreline, particularly during high tides (approximately 05h00-06h00/ 17h00-18h00) for both Monday and Tuesday,” the weather service stated.

“This may result in localised infrastructure damage along the Western Cape coastline, as well as difficulty in navigation at sea for small vessels, with the likelihood of vessels taking on water and possibly capsizing.”

With rainfall amounts expected to be in the region of 30 to 40 mm, flooding incidents are likely over the western areas of the Western Cape.

The weather service also warned of very cold conditions that are expected to set in from today.

It issued the following warnings: 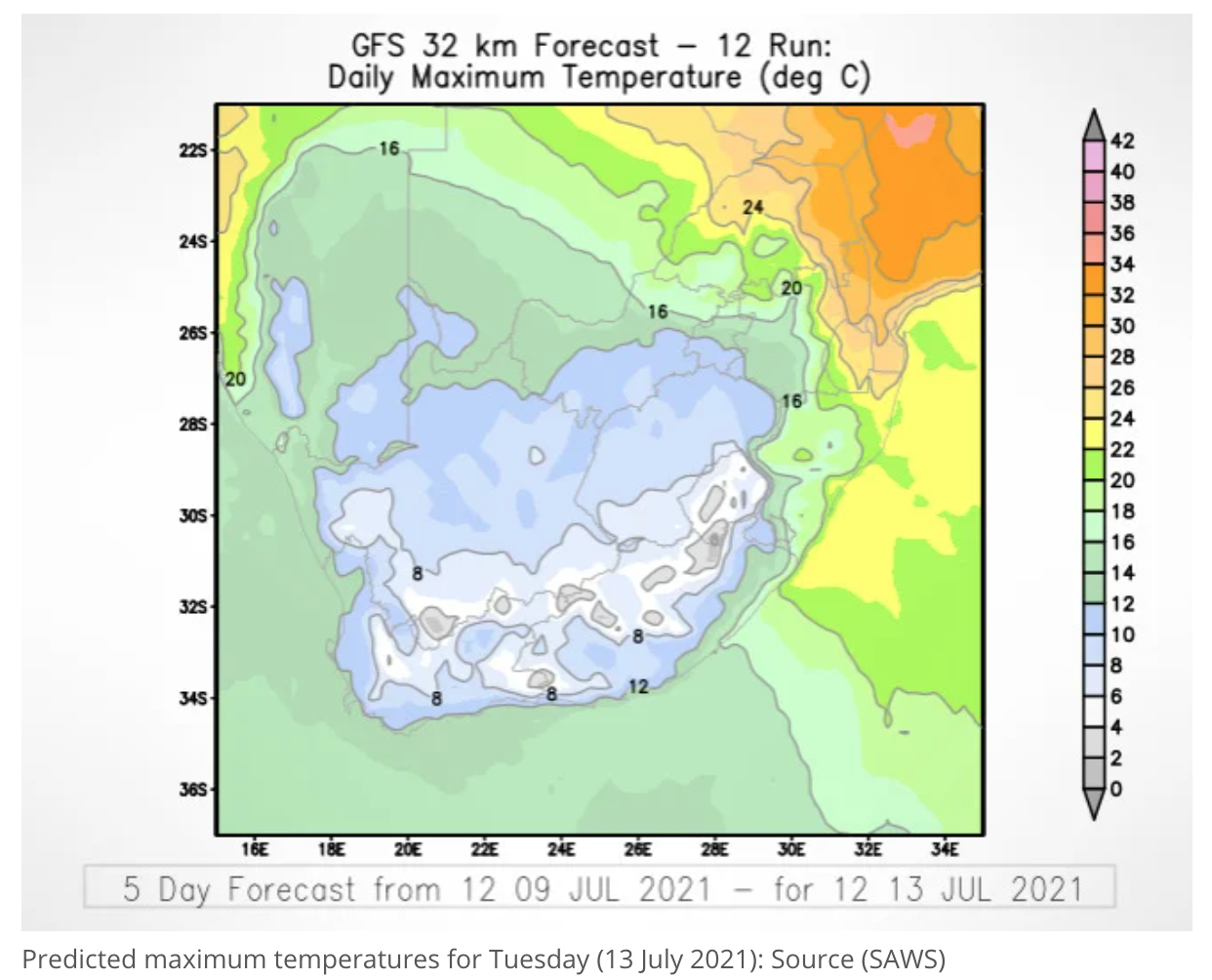 Eskom grounds technicians in KwaZulu-Natal and Gauteng due to protests

In addition to its weather-related warnings, Eskom also said that the protests in KwaZulu-Natal parts of Gauteng pose a danger to its technicians who provide services in these communities.

“Eskom will not dispatch technicians in areas where there are protests,” said Eskom distribution group executive, Monde Bala.

“Safety of our employees remains our priority and therefore where we feel our employees are not safe, we will withdraw them immediately,” Bala stated.

“Our teams will do risk assessment before dispatching technicians.”

Eskom asked customers who have logged faults to be patient as they might experience delays in response time to resolve their faults.

“Please bear with us, we will attend to the queries when there is an indication that the protest has calmed down,” the power utility stated.

“Our teams will continue to conduct risk assessments, hence our technicians will only be dispatched when it is safe to do so.”