State-owned power utility Eskom has come under fire again, this time from energy advisor Ted Blom. Speaking to Gareth Cliff, Blom has said that CEO Andre de Ruyter has ‘perfected’ “corrupt dealings around coal when he signed the new Duvha coal supply agreement.” According to Blom, the deal is corrupt as the investors in Seriti are two companies – Batho Batho Trust and Thebe Investment – which are both investment arms in the ANC. “So now you have the ANC supplying expensive coal to Eskom, and lots of it – 8 million tons a year minimum,” says Blom. Eskom has dismissed the allegations, with the state-owned entity’s spokesperson, Sikonathi Mantshantsha, saying Blom is within his rights to hold Eskom accountable but also added “none of that gives Blom any right to make defamatory accusations about corruption lightly, and without any basis”.  This article was first published on MyBroadband. – Jarryd Neves

Eskom has dismissed allegations from mining and energy advisor Ted Blom that a recent coal supply agreement with Seriti Resources is corrupt.

The agreement, which will run until 31 December 2024, includes an annual escalation in line with the producer price index.

This paved the way for Seriti Resources to buy SA Energy Coal from Australia-based South32. SA Energy Coal supplies most of the Duvha power station’s coal requirements, which contributes 2,875MW to the grid.

Commenting on this deal, Blom told Gareth Cliff it is a perpetuation of the corruption which was seen with Eskom and the Gupta family.

He alleges that Eskom CEO Andre de Ruyter “perfected” the corrupt dealings around coal when he signed the new Duvha coal supply agreement.

“This is a corrupt deal because the investors in Seriti are Batho Batho Trust and Thebe Investment, both investment arms of the ANC,” Blom said.

“So now you have the ANC supplying expensive coal to Eskom, and lots of it – 8 million tons a year minimum.”

“That is going on right under our noses, signed off by De Ruyter, with a big smile.”

To understand Blom’s allegations, it is important to look at Seriti Resources’ shareholding.

Blom’s allegations are based on one of these shareholders, Thebe Investment Corporation. It was founded in 1992 as an ANC investment company with the Batho Batho Trust as its sole shareholder.

Secret ANC documents uncovered in 2010 revealed that the Batho Batho Trust was intended to “receive dividends” for the ANC.

Over the years, Thebe Investment Corporation’s shareholding changed, and the Batho Batho Trust currently only holds 46.79% of the company. 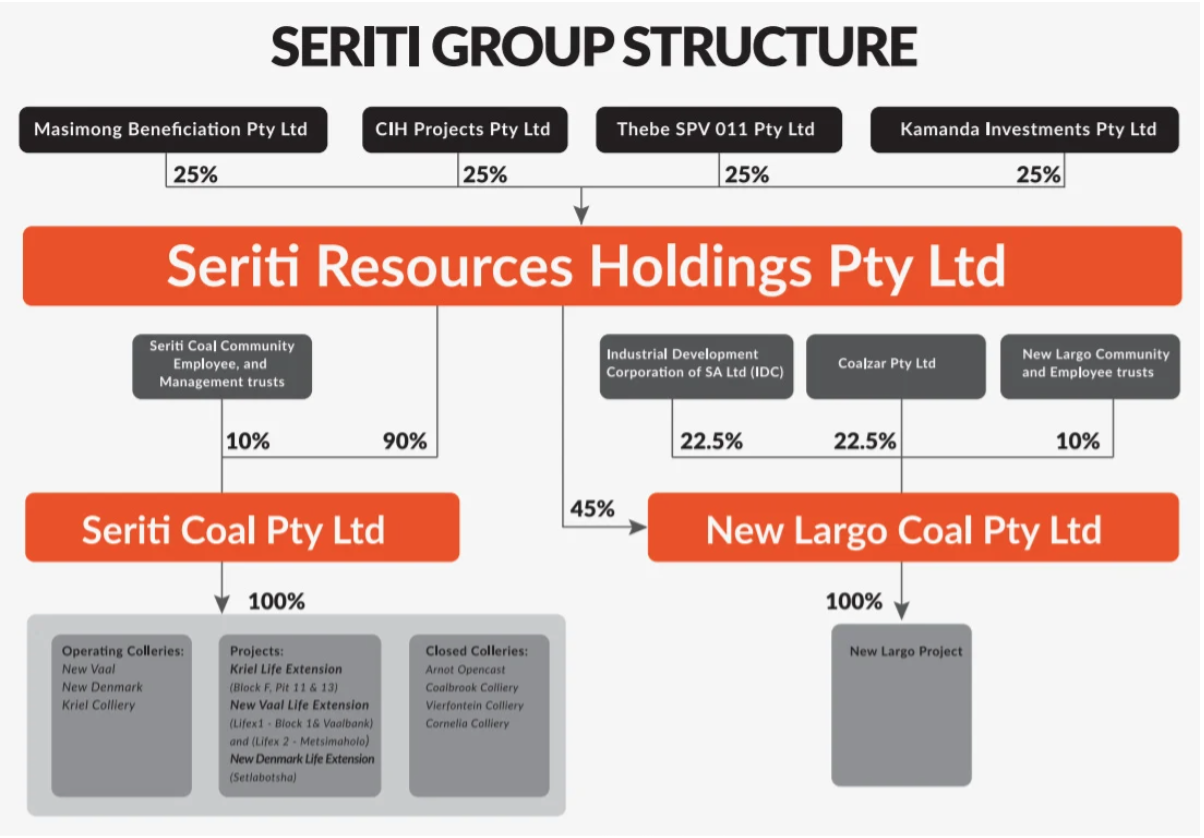 The coal supply agreement Blom is referring to is closely linked to SA Energy Coal.

These losses, it said, were a consequence of selling coal to Eskom below its cost of mining.

Eskom conducted a review and due diligence on the claim and confirmed that the mine was loss-making, with an increased risk of failure.

Seriti Resources, which was looking to acquire SA Energy Coal at the time, wanted a much higher price for coal from Eskom.

Seriti Resources CEO Mike Teke said in April he wanted the price of coal to Eskom increased from R280 per ton to R550 per ton.

Teke got his wish. In May, Eskom announced it had approved the higher coal price for its Duvha power station with effect from 1 June 2021.

Commenting on the deal, Eskom said due to the strategic importance of securing the coal supply for Duvha, they agreed to a modification of the coal supply agreement (CSA) until 31 December 2024.

“The modification of the CSA secures the continued use of SA Energy Coal’s infrastructure at the mine so that alternative coal supplies can be delivered over conveyor into the power station,” it said.

“This transaction is above board, meets all the legal and regulatory requirements, and has received all the requisite approvals, including that of the National Treasury,” Mantshantsha said.

“Securing the continued supply of coal to the Duvha power stations is in the best interests of Eskom and its customers, the people of South Africa.”

Mantshantsha said Blom is within his rights as a citizen to hold Eskom and its management team accountable.

However, he said, “none of that gives Blom any right to make defamatory accusations about corruption lightly, and without any basis”.

“The individuals so defamed have taken note of Blom’s repeated defamatory statements,” he said.