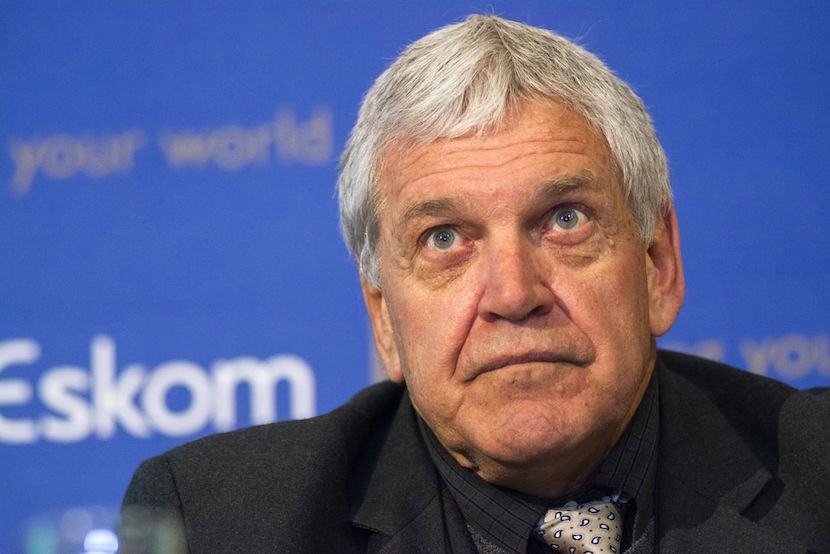 South Africans can brace themselves for less power than ever before this summer. Eskom’s first new power generation unit is due to come online only in January 2023 and an aggressive maintenance campaign aimed at reducing outages long term is now in full debilitating swing. This will require short-term pain for long-term gain. Perhaps like Cyril Ramaphosa, Eskom’s chief operating officer, Jan Oberholzer, is playing the long game, determined to sustain power. Let’s not go into the relative chances of success for each. Suffice it to say that corruption, mismanagement, Gupta-linked coal contracts for pals, BEE and the ongoing repair-under-construction farce of our new power stations affect both equally. Both are (relatively) new brooms. Perhaps the comparison has one positive conclusion; that Oberholzer has a better chance of sweeping clean. Read on to see whether you agree. Story courtesy of MyBroadband Tech. – Chris Bateman

South Africans should prepare for more than 94 days of rotational power cuts and expect load-shedding to hit at least Stage 3 before the end of March 2022.

During its State of the System update on Monday, the utility revealed its fleet’s energy availability factor (EAF) has declined to 65% against a target of 70% EAF for the year-to-date.

It was also worse than the 67.9% EAF at the same time last year.

The EAF indicates available against total generating capacity, which means that Eskom effectively had only 65% of its fleet available on average for the year to date, from April 2021 to September 2021.

Eskom blamed the drop in EAF on faster deterioration in generation units that have not yet undergone reliability maintenance.

There has also been an increase in unplanned outages during the period.

Unplanned load losses accounted for 23.1% of outages for the year-to-date, compared to a target of 18%. At the same time last year, unplanned outages accounted for 19% of total breakdowns.

As of 11 October 2021, the use of these plants cost Eskom R2.44 billion. If it sustains this usage, it will surpass its year-end projection of R4.1 billion in OCGT expenditure.

With the system in a worse state than it was at the same time last year, it seems all but certain that the utility will have to implement significant load-shedding during the summer period (September 2021 to March 2022). 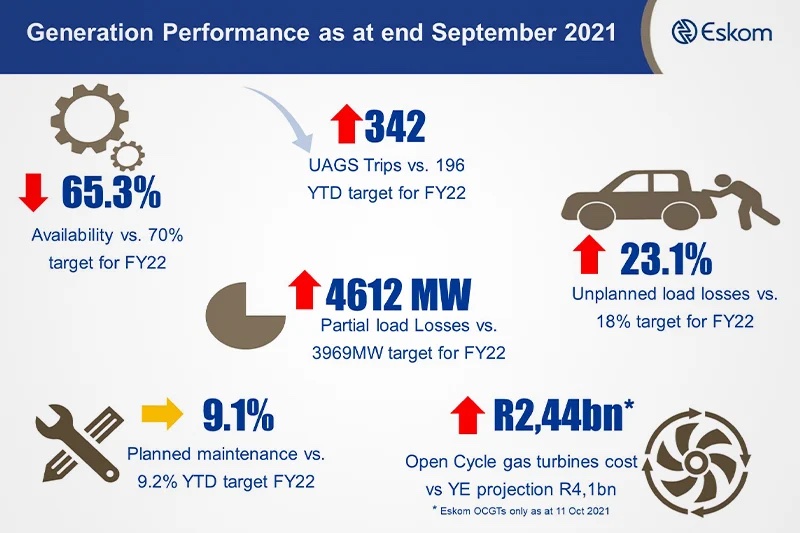 Another key contributor to the low EAF was the high levels of planned maintenance during the summer months.

“Our objective is to achieve a reliable and sustainable generation plant, thereby reducing the risk and frequency of the occurrence of load-shedding,” Oberholzer said.

“However painful in the short term, this maintenance we have to do to ensure future reliability.”

The utility said it had increased the planned maintenance programme to an average of 5,500MW of capacity.

Eskom provided a capacity outlook for the next 18 months based on a base case assuming 12,000MW of capacity is unavailable due to unplanned losses during the next two summer and winter periods. 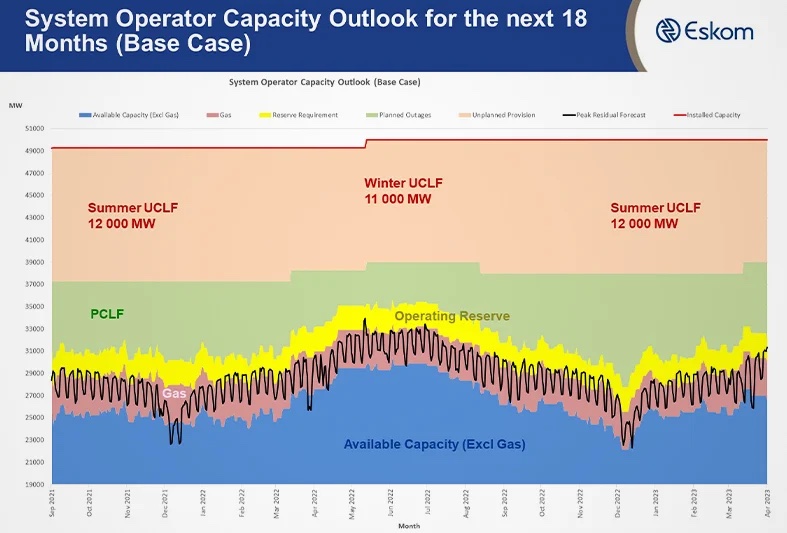 Eskom’s forecast for the number of load-shedding days that it required over the next 12 months painted a grim picture.

Based on the outages experienced during the last summer period, Eskom anticipates 94 days of blackouts, reaching a high of Stage 3 load-shedding should the grid suffer more than 14,000MW of outages 10% of the time.

In addition, the forecast is based on unrealistic diesel spending on OCGTs of R13.5 billion.

Eskom said it was only possible to use about R1.2 billion diesel per month, which would work out to a maximum of R7.2 billion over six months.

The actual amount of load-shedding required will therefore be much higher than 94 days. 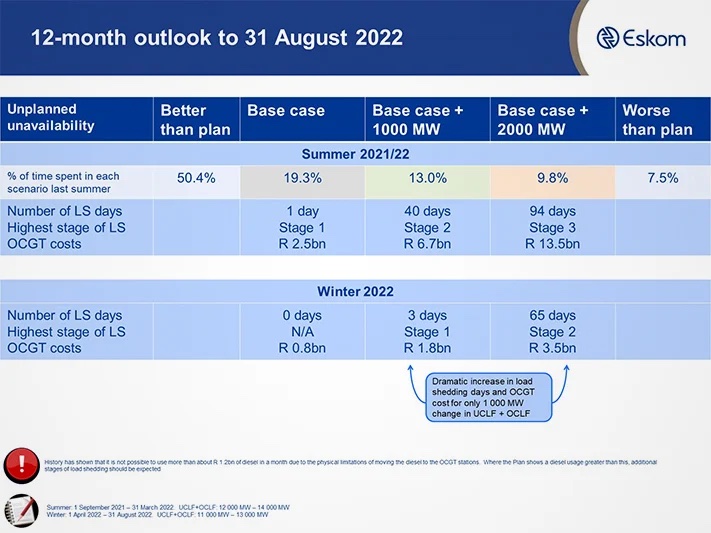 Eskom conceded that load-shedding was damaging to the economy but claimed its accelerated maintenance programme had borne fruit, with limited load-shedding during the winter.

Oberholzer emphasised the urgent need for an additional 4,000MW to 6,000MW generation capacity to complement the Eskom available capacity and eliminate the risk of load-shedding.

Eskom currently only has plans to add another 2,400MW of generating capacity at the Kusile Power Station, which should help ease the strain on the system, but will be insufficient to stop load-shedding altogether.

In addition, the first new unit is only planned to go online in January 2023.