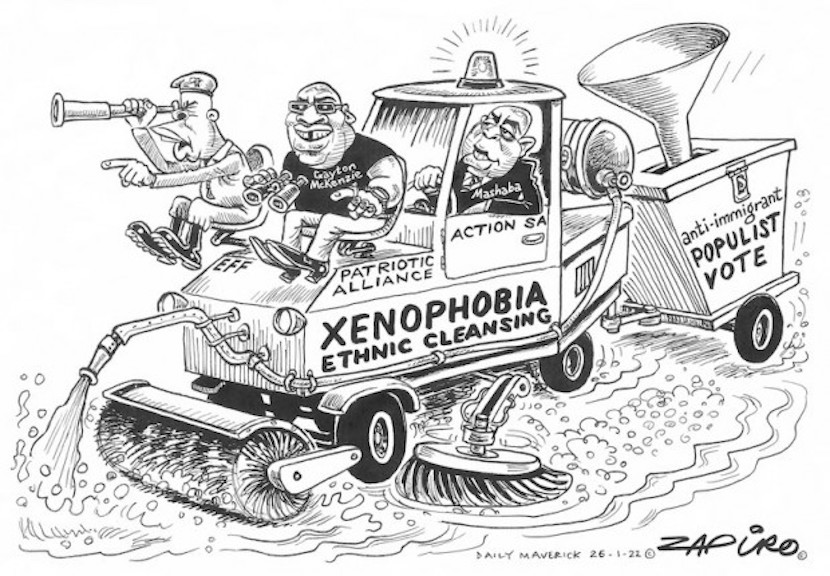 President Cyril Ramaphosa recently warned against “the stoking of anti-African sentiment”. This was in response to several political parties taking the law into their own hands.

The EFF conducted site visits to several private businesses demanding to know how many foreigners are employed. The Patriotic Alliance went on a confiscation spree confronting “illegal foreigners” by removing expired goods from their stores.

The South African Informal Traders Association (SAITA) – which claims to represent over two million informal traders – says it’s “alarmed and disappointed by the renewed harassment by political vigilantes of foreign workers operating in the informal sector”.

ActionSA recently publicised that, “A number of raids have taken place to confront businesses accused of illegal activities and non-compliance.” One such business was allegedly illegally producing documents “such as passports, visa/permit documents, business operation permits and municipal permits”.

There is one stark difference between the conduct of ActionSA and what members of the other two parties did. ActionSA’s efforts were channelled through the Ekurhuleni MMC for Community Safety Tlhogi Moseki, an appointed official carrying out his duties within a legal framework. The EFF and PA’s officials are effectively ordinary citizens. Someone like Julius Malema is, of course, a member of Parliament, but for him to claim he was doing “Parliamentary oversight” at Kream in Midrand is a ruse.

In which capacity? Considering that the Constitution only provides for oversight over organs of state and the national executive.

If this was an official visit, Malema and the onesies would have been asking questions of the Department of Labour. https://t.co/pQalsIpTB4 pic.twitter.com/ARxrRIfz4j

ActionSA’s Herman Mashaba says: “I don’t need to be on the ground creating spectacles for votes that won’t bring any lasting change. ActionSA has representatives within government working to fix these issues.”

Some political parties are quick to point out that their efforts to prioritise South Africans in the labour market should not be seen as an attack on Africans living and working within our borders legally. The Patriotic Alliance’s Gayton McKenzie is clear he wants illegal foreigners out. He wants “100%” of jobs to be reserved for South Africans, but added that “only foreigners with a specialised skill” should be employed.

South Africa’s economy is trickling along with sustained impediments like Covid-19, the July 2021 riots and the lockdowns costing millions of jobs. People either joined the ranks of the unemployed or turned to the informal sector in their droves to put food on the table.

National President of SAITA, Rosheda Muller, says: “It is our contention that state organs such as Home Affairs, Dirco and SAPS are the institutions which have the authority and responsibility to intervene in issues involving foreign workers in our country. However, SAITA, as the recognised representative of the informal sector, is well-placed to advance discussions with government on finding long-lasting solutions to issues involving foreign workers. SAITA stands ready to assist. Government is urged to reciprocate.”

“Furthermore, whilst we remain of the view that preference is given to unemployed South Africans regarding the allocation of trading spaces on our markets, we regard those foreign traders already within our ranks as colleagues. Many have been there for more than 20 years. To see them now being harassed by political opportunists is both sad and concerning.”

Small Business Development Minister Stella Ndabeni-Abrahams recently said: “As government, we have a responsibility to enforce regulatory compliance in the SMME sector and close businesses that are trading illegally.”

Taking aim at the minister’s comments, DA Federal Council chairperson Helen Zille said, “I wonder if this minister has ever actually started, financed and run a small business in her life? She should ask those of us who have, how difficult this government makes it for people trying to earn an honest living. Minister of Small Business Destruction.”

I wonder if this Minister has ever actually started, financed and run a small business in her life? She should ask those of us who have, how difficult this government makes it for people trying to earn an honest living. Minister of Small Business Destruction. https://t.co/ECAjJw3XZT

John Endres from the Institute of Race Relations took to Twitter saying: “How about you [as the Department of Small Business Development] figure out a way to address the reasons and keep the businesses open? It’s not like we have a surfeit of business. Or jobs.”

South Africa has witnessed horrendous acts of violence and attacks on foreigners over the years. As a result, in March 2019, the government launched its National Action Plan to Combat Racism, Racial Discrimination, Xenophobia and Related Intolerance (NAP). The document states in its conclusion that the NAP is the ideal opportunity for South Africa to renew its commitment to the fight against racism, racial discrimination, xenophobia and all other forms of prejudice and intolerance.

In an address after the ANC’s latest NEC meeting, Ramaphosa said South Africa’s migration policy remains “infused with principles of pan-Africanism”. As for the country’s employment principles, the Labour and Employment Minister Thulas Nxesi says he’s fully in support of the notion of introducing local-to-foreign employment quotas in the country.