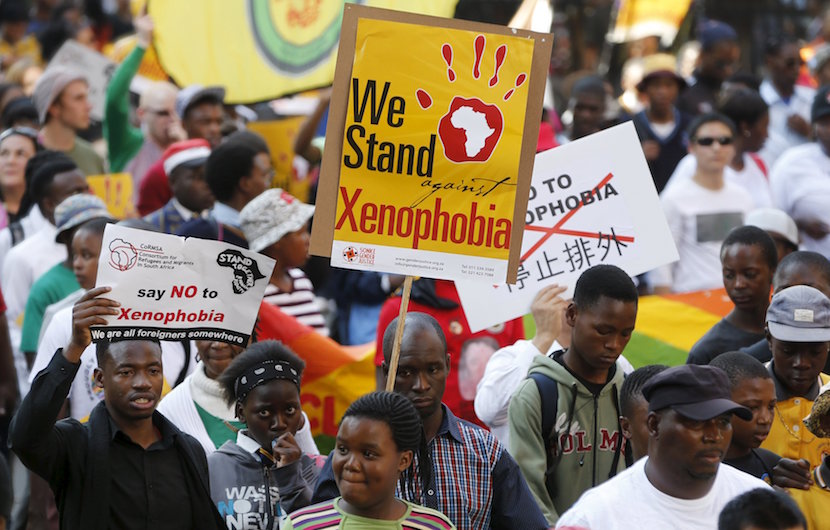 On almost every level, illegal immigration serves South Africans and the local economy. Yet at least three political parties are stirring up xenophobic sentiment to win populist support, citing patriotic nationalism and ‘job theft’. With an intellectual rigour frighteningly absent in the Freedom Front, Patriotic Front and ActionSA, Ivo Vegter likens their raids to those of the pre-war Nazi Party arrogating the rule of law to themselves and committing gross human right infringements. How different was the anti-Jewish rhetoric and whipping up of public antipathy on Jewish shopkeepers to what these parties are doing? Striding into spaza shops and small businesses, demanding the details of foreign employees, or confiscating expired goods is criminal, unless you’re a government official. Even so, some police are notorious for extorting money, goods and sex from foreigners. Besides generating millions and secondary employment, undocumented foreigners cost the country nothing in social services. This story first appeared in the Daily Friend. – Chris Bateman

Anti-immigrant rhetoric should be taboo

Xenophobic populism is both very, very dangerous, and ideologically misguided. It should be taboo territory for any respectable politician.

Earlier this week, I started rewatching the classic 1973 documentary series The World At War, since my wife and I thought it might be instructive for our 12-year-old kid. The first episode documents the rise of Adolf Hitler from 1933 to 1939.

We like to think that this is ancient history, and that we’ve learnt from that history. After all, 1933 was almost 90 years ago. Yet, the story on the screen of the popular appeal of scapegoating foreigners and immigrants for poverty and unemployment, has echoes today, around the world and in South Africa.

Like a jumped-up corporal, Julius Malema and his goons have been going around intimidating small-business owners for employing foreigners instead of South Africans. Afraid of the implied threat that the Economic Freedom Fighters (EFF) can rain destruction upon your business if you fail to cooperate, business owners meekly offered up the private details of their employees for the EFF’s inspection.

Deeply offended, Herman Mashaba, the one-time free marketer-turned-populist leader of ActionSA, claimed that raiding small businesses over their employment of immigrants was really his idea.

Not wanting to be left out, Gayton Mackenzie, the chief gangster of the Patriotic Front, arranged his very own raid against spaza shops allegedly owned by ‘illegal foreigners’, stealing allegedly expired food items for disposal, on authority he certainly does not have.

The rising xenophobic rhetoric from supposedly legitimate political parties such as ActionSA, the EFF and the Patriotic Front not only sounds disturbingly similar to the anti-Jewish rhetoric in Nazi Germany, but it has – predictably – led to deadly pogroms and vigilante-led campaigns to crush foreign traders.

Malema, trying to reconcile his ideological pan-Africanism with the practical consequences of his anti-immigrant rhetoric, condemned violence against shops owned by foreign nationals, trying to blame colonisation for the enmity among different African nationalities.

Mackenzie, too, claims to rail only against illegal immigrants. So does Mashaba, who told the media: ‘I personally condemn all forms of xenophobia. Foreigners are welcome in SA and immigration continues to add richness to our society. No-one should be discriminated against based on their country of birth or origin.’

None of these people have the right to demand papers from random South Africans. South Africans are not required to carry papers to prove their immigration status. Malema, Mackenzie and Mashaba do not work for Home Affairs. Yet, here they are, whipping up anti-immigrant sentiment in the crass pursuit of popular votes.

Meanwhile, police officers do a roaring trade extorting bribes from illegal immigrants. By greasing the right hands (or sleeping with the right cop), anyone who gets deported can be back at work in South Africa within the week. The mob, of course, doesn’t discriminate between legal and illegal immigrants. It doesn’t ask for papers. The wrong complexion or the wrong accent is enough to condemn Zimbabweans, Malawians, Somalians, Congolese and Nigerians living and working in South Africa. South African citizens, too, have been caught up in the vigilante pogroms, their bodies beaten, their stock looted and their stalls torn down.

Meanwhile, the likes of Mashaba, Malema and Mackenzie pretend that butter wouldn’t melt in their mouths, while they stir up populist hatred and violence. Their whole ‘South Africans First’ shtick is exactly how Hitler got started.

The popular belief, and the belief spread by the xenophobic populists, is that foreigners ‘steal’ the jobs of South Africans. They believe that for every foreigner who has a job or owns a business in South Africa, there is one South African who doesn’t have that job or own that business. They see the economy as a zero-sum affair, where it’s all about who gets slices from the pie, and not about making more pie.

In reality, foreigners who do productive work in South Africa actually grow the economy, which makes everyone better off. If they’re undocumented, so much the better: they don’t cost the country anything in social services, either. Foreigners who own businesses not only increase trade and economic activity, but if successful, they can also employ people, contributing even more than those who are merely employed.

The irony is that immigration is a net benefit to a country. Hurdles to immigration might be the single biggest constraint on global economic growth, according to a review article in the respected Journal of Economic Perspectives.

“The gains to eliminating migration barriers amount to large fractions of world GDP – one or two orders of magnitude larger than the gains from dropping all remaining restrictions on international flows of goods and capital,” writes the author, economist Michael A Clemens.

He largely talks about migration from developing countries to developed countries, but the argument holds for immigration into South Africa, too. From a pure arithmetic point of view, this makes sense. People who want to leave poor countries are less productive than they could be. Moving to countries where they can be more productive means there is a net gain to the global economy.

That net gain is hard to estimate, but Clemens reckons it could be trillions of dollars, as much as 20% to 60% of global GDP. These gains are more than enough to compensate for disruptions due to the temporary lowering of wages (and commensurate raising of returns on capital) in destination countries.

By competing in the market, immigrants also benefit local consumers, as one can deduce from the fact that foreign-owned spaza shops are, indeed, successful. Consumers wouldn’t shop there if they didn’t offer the best economic choice.

In addition, there is an argument based on intrinsic individual liberty. Why shouldn’t a person be free to choose where they wish to live and work? They have that right within their country, where freedom of movement is a basic human right, constitutionally guaranteed. Why should the artificial construct of national borders, and the geographic accident of one’s birth, trump freedom of movement?

Perhaps the populists should start celebrating immigrants, instead of whipping up hatred. They could argue that South Africa must be a desirable place, despite its problems, or immigrants wouldn’t want to be part of its success. They might even – imagine how radical! – point out the true economic bogeymen in South Africa. The blame for the country’s poverty and unemployment doesn’t lie with immigrants, legal or otherwise. It lies squarely with the poor economic policies and widespread corruption of ruling party politicians and civil service deployees.

Promise to change that, and South Africans might have something positive to vote for.

Even if temporary labour market disruption is a problem, it should be up to politicians to help people manage the conflict, instead of turning native South Africans against their non-native brothers and sisters.

Populist xenophobia is a recipe for violence, economic harm, and political disaster. We really shouldn’t tolerate the politicians who think it’s a game they can play to win support, because that is how genocides start.