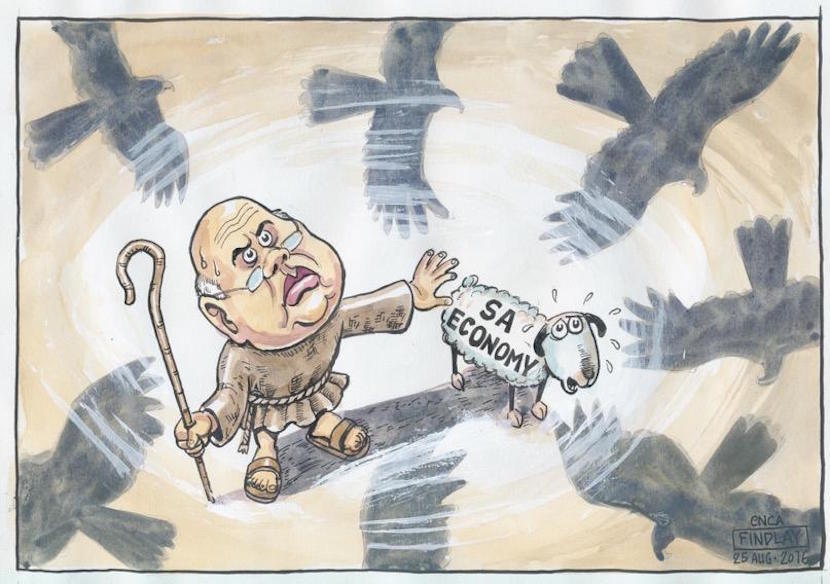 International investors think it is increasingly likely that South Africa’s finance minister Pravin Gordhan will be replaced as President Jacob Zuma and his faction within the ruling ANC continue with a plan to take full control of the National Treasury. The ultimate prize is maintaining control of the ANC as a succession battle develops. The rand’s value is expected to decline, but not as quickly or severely as you expect at first, with it expected to be trading at about R17 to the US dollar by the end of the year. This was the message contained in a bulletin released by one of the world’s leading analysts on South Africa, London-based Peter Attard Montalto of Nomura. He cautions that markets continue to “grossly underestimate political risk” in South Africa. This in turns suggests that if you are thinking of taking some profit and shifting money offshore, it’s probably a good idea to do it sooner rather than later. – Jackie Cameron

The news that Pravin Gordhan has been issued with a formal summons to answer charges of fraud “is only a small cog in a much larger and existential succession battle within the ANC that will continue until the end of 2017 – damping investor confidence and growth”, he said.

From an international perspective, the “‘war’ has again come to the surface with the National Prosecuting Authority (NPA) summoning Gordhan for fraud alleged to have occurred while he was SARS Commissioner”.

In an obvious manouevre to shift Gordhan to the sidelines, Director of National Prosecutions Shaun Abrahams this week laid out a flimsy “criminal” case against the finance minister over the early retirement of a South African Revenue Service employee. For an indication of just how ropey the charges are, read this story on BizNews: Proof (in pictures) that NPA charges against Gordhan trumped-up, political.

Said Attard Montalto of the NPA announcement: “Much of the press conference centred on the NPA defending its supposed independence – especially against comments from Pravin Gordhan last week that the NPA amongst others was engaged in ‘political mischief’, as well as the so called SARS spy (or rogue) unit under the watch of Pravin Gordhan when he was Commissioner.

“The NPA has stated clearly it sees actions within the spy unit as ‘unconstitutional’ and ‘unlawful’ but the investigations are continuing and no charges are being laid on that issue at this time. The line taken by the NPA here is clearly new but, as we have highlighted previously, the NPA is looking for a more solid case before it moves to charge – something we think is still possible in the coming months.”

Read also: Pravin Gordhan struggling to understand the nature of NPA charges. Aren’t we all?

Attard Montalto said in a bulletin to investors that it is “easy to get lost in the minutiae of the logistics here, but the key is to zoom out and see the context within which this sits”.

“We do not think ‘factions’ and ‘forces’ within the ANC and aligned to President Zuma want to see Pravin Gordhan in jail, or indeed that this case could ever come to trial given the politically damaging evidence that could be produced.

“The issue here is about access to the National Treasury and the ability of factions within the ANC to control it and use its powers to win the elective conference in December 2017. That ultimately would require the removal of Pravin Gordhan who has defended the institution’s conservatism and independence.”

Utilising ANC rules on leaders not holding office while facing charges are part of the capping out of that narrative, he said.

The South Africa analyst pointed out that President Zuma has shown some aversion to implementing a reshuffle to remove Pravin Gordhan until the narrative is completely set. The ejection of Gordhan “is ultimately seen as a 50:50 event”.

The rand has been unusually strong on the back of SABMiller/ABI-related inflows and “carry is still king”, he noted. “As such, we think ZAR will always try to grind stronger but then be batted weaker by news shocks like this This makes it an exceptionally difficult market to trade.”

Attard Montalto said his team expects an emergency ratings downgrade only when Gordhan is actually removed, though a downgrade seems inevitable in early December on lower growth and lack of structural reforms alone.

“Ultimately, we see the political and policy uncertainty continuing through to end-2017, holding back growth, job creation and especially domestic private sector investment,” he said.

The Hawks have denied reports that some of its officials tried to influence the head of the NPA to pursue a case against Minister Gordhan.

The investment expert added that it is unlikely that President Zuma will step down or be removed from office any time soon.