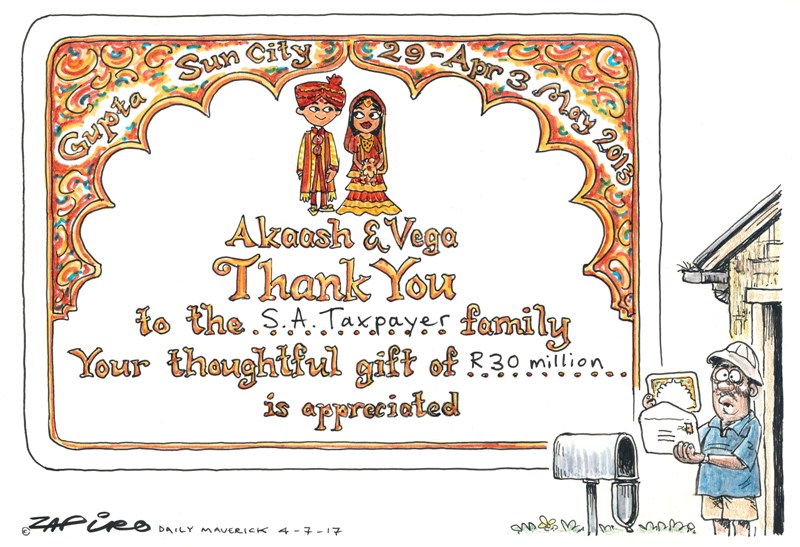 EDINBURGH — Global auditing giant KPMG is caught up in a corruption scandal that reaches to the highest levels of the South African government. The KPMG name has been appearing with increasing frequency in connection with state capture and graft involving the powerful Gupta family. The #GuptaCurse claimed Bell Pottinger as a corporate victim after the public relations company was exposed for aiding and abetting the Gupta family by running a £100,000-a-month campaign to incite racial division and smear Gupta critics. Bell Pottinger is teetering on the brink of collapse as its big clients dump it for its corporate sins. The allegations swirling around KPMG, whose senior employees watched as the Gupta family stole money from South African taxpayers and then laundered it through the global financial system to pay for a private wedding, have angered many South Africans. Client Sygnia dumped KPMG as its auditor after it failed to adequately explain its work for the Gupta family. Question marks also hover over a KPMG report at the centre of a smear campaign aimed at bringing down former finance minister Pravin Gordhan, who has fought against the Gupta-Zuma clique. Following questions from BizNews, the Institute of Directors has revealed that it has finally decided to temporarily suspend its involvement in the KPMG audit committee initiative.The Institute of Directors also doesn’t want KPMG sponsorship for a golf day. Will the #GuptaCurse soon claim more corporate scalps? – Jackie Cameron

Institute of Directors in Southern Africa

Statement on partnership between KPMG and Institute of Directors

The Board of the Institute of Directors in Southern Africa (IoDSA) is fully aware of the recent allegations published in the media against KPMG. The IoDSA has met with KPMG to explore this in more depth.

Following review of the matter, the IoDSA Board has decided to temporarily suspend co-branded activities with KPMG, including sponsorship of its golf day and involvement in the Audit Committee Forum, while investigations are underway.

In line with its commitment to good governance, the IoDSA Board is allowing KPMG International a fair and equitable opportunity to conduct a thorough internal investigation. The IoDSA is also aware of the investigation by the IRBA (the Independent Regulatory Board for Auditors) against certain partners at KPMG.

The IoDSA Board will continue to monitor the matter until a standing decision can be made, based on factual findings in relation to the current allegations and media reports.

BizNews: In connection with the golf day, kindly advise on why your name is on this marketing emailer – and therefore kindly address why you are sponsoring this event at a time when your corporate ethics are being questioned? Also, instead of sponsoring events like this, why aren’t you making moves to repay the funds as KPMG as benefited from the proceeds of crime – and in particular the theft of taxpayers’ funds?

KPMG: We have agreed with the organisers of the golf day that we will no longer sponsor this event

Keep up with the role of KPMG in state capture here:

KPMG South Africa CEO Trevor Hoole is at best a man who has looked the other way as his associates undertake work that enriches and empowers the Zupta clique transforming South Africa into a kleptocracy. The KPMG name has popped up with increasing frequency wherever there is the smell of state capture and corruption. .  Edmunde Burke famously stated: “The only thing necessary for the triumph of evil is for good men to do nothing.” As Gordhan and business leaders like Wierzycka tackle the beast head on, others – like Hoole, his team at KPMG and KPMG friends in business – dig in their heels.

Magda Wierzycka is the first leader in the business sector to take a firm stand against the big corporates who have benefited from state capture. Wierzycka said in a recent interview on television that she was prepared to be outspoken, even though this is not the done thing in the corporate sector, as she is fully committed to seeing a better future for South Africa. Meanwhile, KPMG leaders appear to have their proverbial heads in the sand, opting for a “silence is golden” approach to managing their reputation in this crisis

Magda Wierzycka is one of South Africa’s most successful female entrepreneurs, and arguably its most influential in the financial services sector. Wierzycka has also become one of the most outspoken South African CEOs on the subject of corruption and the abuse of the disadvantaged. Earlier this year, her criticism of asset management rival Allan Gray ultimately led to a change in the boardroom of Net1 – a Nasdaq-listed companyaccused of riding on the backs of welfare recipients. Now Wierzycka has taken action against Big Four accounting firm KPMG.

KPMG, a global big four consulting firm, has underestimated the reputational risks of turning a blind eye1 to corruption and state capture. KPMG’s reluctant apology for helping the Gupta family use state funds to pay for a lavish private wedding – and adding in a nifty tax dodge on this cash – has fallen flat. As top financial columnist Ann Crotty notes in the Financial Mail, many in the corporate world are unimpressed with the way KPMG boss Trevor Hoole and his team have handled explosive revelations of the company’s role in helping a previously poor immigrant family from India raid SA state coffers. The KPMG response speaks volumes about the organisation’s corporate ethics. Read here.