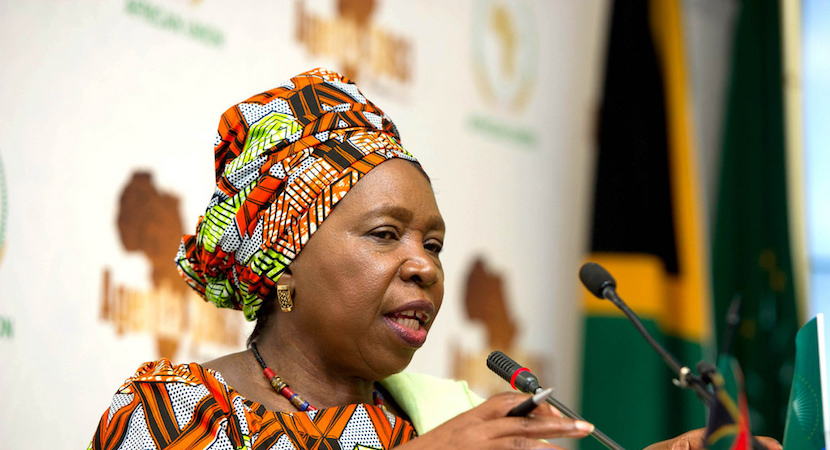 EDINBURGH — South Africans have long suspected that President Jacob Zuma is pushing his ex-wife Nkosazana Dlamini-Zuma to become the next president as part of a plan to protect the extended Zuma family. Last week Nkosazana’s name appeared on a list, along with other members of the Zuma family, that was circulated among UK and European politicians. She stands accused of money laundering – which is pushing funds acquired through the proceeds of crime through the global financial system. Her supporters have denied she has committed any financial crimes, though they all happen to be within the Zupta clique and have also been tainted by graft. Dlamini-Zuma backers argue that the accusation is a plot by foreign intelligence operatives to interfere with internal ANC business. However, prominent British politician Lord Peter Hain is the person who has blown the whistle on Nkosazana Dlamini-Zuma. His information comes from individuals in South Africa. Lord Hain has impeccable credentials as an anti-apartheid activist. He has called on the authorities in the UK and Europe to investigate Dlamini-Zuma and for global banks to stop doing business with individuals on the list. Another logical next step would be for governments to impose sanctions on South African politicians who have helped to raid state coffers and shift the proceeds elsewhere. – Jackie Cameron

The woman who may be South Africa’s next president – and its first female president – is on the list of individuals accused of illegally washing the proceeds of criminal activity through global financial systems.

Presidential hopeful Nkosazana Dlamini-Zuma, ex-wife to President Jacob Zuma and former chairperson of the African Union Commission, is among the Zuma family members on a list handed to UK and EU law enforcement authorities.

South African raised Lord Peter Hain, an anti-apartheid activist who became a prominent British politician, called on British and European governments to investigate financial crimes committed by the Gupta and Zuma families and their associates.

In letters to UK Chancellor Philip Hammond and European Commission President Jean-Claude Juncker, Hain provided details of individuals who should be investigated for “industrial scale” money laundering. The names include President Jacob Zuma and some of his current wives, including Gloria Ngema-Zuma and Thobeka Madiba-Zuma.

There are many people with the surname Gupta on the list, plus associates of the crony capitalists like Eric Wood of Trillian and former Eskom and Public Investment Corporation boss Brian Molefe.

Hain has also put the spotlight on corporate evil-doers KPMG, McKinsey and SAP – all of which raked in huge sums by facilitating business dealings of the corruption-tainted Guptas – and global banking giants HSBC and Standard Chartered, which appear to have allowed the laundering of the proceeds of crime.

Dlamini-Zuma’s backers have labelled reported links between her and alleged illicit flows of funds by the Gupta family as a “clear” attempt to block her from ascending to the party’s top post, reports News24.

Kebby Maphatsoe, who was amongst the leaders who flanked Dlamini-Zuma during her presidential campaign rally in Evaton in the Vaal on Sunday, said the probe was a case of foreign intelligence services interfering in the ANC succession debate.

“They are interfering in internal affairs of the ANC, to determine who is the next president of the ANC, because they don’t like Nkosazana Dlamini-Zuma talking about radical economic transformation,” Maphatsoe said.

Other Dlamini-Zuma backers – who have all been implicated in the Gupta-Zuma state capture scandal – also rallied to her defence.

Free State ANC chairperson Ace Magashule said South Africans were not stupid and could see that it was a “clear” attempt to block her.

“Why, now that Nkosazana is contesting the leadership of ANC. I don’t think we will be fooled. At all times, people have been blamed, attacked and tarnished. I think it is for NDZ to stay focused,” News24 quotes Magashule as saying.

Dlamini-Zuma has denied the alleged links, said News24. The former African Union chairperson released a statement on Friday in which she claimed that she was unaware of Hain’s letter.

“For the record, Dr Dlamini Zuma has no links with any of the Gupta associated businesses, except for the finances received for the South African Person of the Year Award which she received, like many other prominent South Africans,” she reportedly said in the statement.

Nkosazana-Zuma is a medical doctor who worked in the UK before serving in various roles in the South African government, including as minister of health, home affairs and foreign affairs at various times. She has retained close ties with Jacob Zuma, although they are divorced.

It is widely understood that President Zuma is pushing for Nkosazana-Zuma to take up the presidential baton in order to ensure protection for the corruption-tainted Zuma family.