JOHANNESBURG — Corrupt consultancy companies have come sharply under the spotlight in South Africa in the last 18 months. First, there was McKinsey & Company which used dodgy Gupta fronts to win SOE contracts at the likes of Eskom and then fleece taxpayers by basically doing little in return. Now we have this consultancy company called Bain & Co, headquartered in Boston, which looks even more dastardly. The revelations that have come out about how they wielded influence with Tom Moyane (even before he was SARS boss) and how they visited Jacob Zuma at his Nkandla homestead should make every South African sick to their stomachs. What actually then transpired, according to SARS officials at the Nugent Commission, is that Bain & Co became another tool for Tom Moyane to completely wreck this once-proud institution and hollow it out of skills. The end result was a massive R50bn revenue collection shortfall for 2017-18 — a factor that impacts every South African, but especially the poor, in hugely damaging ways. If you’re like me, you’re probably tired of hearing of these ‘mea culpas’ from these consultancy firms – here’s another one from Bain & Co posted below. We now need more action from law enforcement authorities. Hopefully, with the imminent arrival of a new NPA boss, we’ll start to see that happening. – Gareth van Zyl

In light of new questions being raised during last week’s testimony before the SARS Commission of Inquiry and from media inquiries, led by our global leadership and external Counsel, Bain & Company is now undertaking a deep and extensive investigation into all matters relating to our work with SARS. We want to be absolutely certain that we entered into our SARS engagement in full compliance with applicable procurement laws and that our investigation’s findings are accurate and unassailable.

We want to be completely open and transparent, as we believe that is what the people of South Africa deserve. However, given the Commission of Inquiry is continuing its investigation we cannot publicly discuss anything that would in any way affect the ongoing work of the Commission.

Bain continues to stand by the value and rigor of its work – not as a point of pride – but out of a sense of mission that our South African associates wanted to bring to that organisation. We worked hard because we wanted to help SARS become an even better organisation and we believe our work could help to do that.

We have listened with concern to the testimonies of SARS employees who feel they have been mistreated and disrespected, at their frustration and pain and the consequences this has had on the lives of these individuals and their families. We are dismayed by the way our work has been used to further a different agenda than was intended. In our recommendations, there was no need for any lay-offs or terminations. This didn’t turn out to be the reality when the model was implemented. We are deeply sorry for how this turned out – we wish we had known then what we do now.

We contend that this could have been avoided. Through the various Commission testimony, we now know that essential elements of delivering a successful operating model were not systematically addressed, causing the failure at SARS.

As we stated in our testimony, Bain believes that the success of an operating model for an organisation is a function of defining and implementing all elements of the model correctly: leadership, organisation structure, accountabilities and decision processes, governance forums, core values/ways of working, capabilities, business processes, and IT systems. We raised this with SARS, but Bain’s contracted work on the operating model covered only one aspect, organisational structure, whilst SARS handled internally all other aspects of the process. This point must not be lost nor is the fact that the design principles for this structure was presented to and reviewed by SARS’s independent Advisory Board instituted by the Finance Minister. 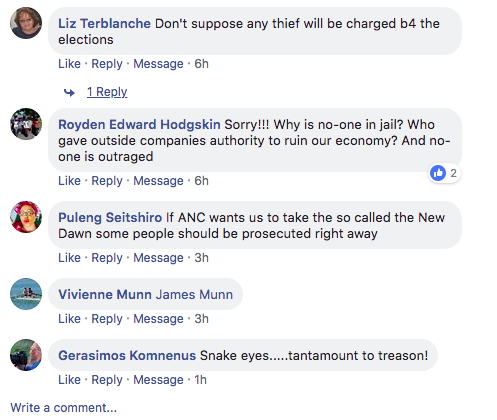 These last few weeks have been difficult. There is a growing frustration within our firm that we did not recognise the possibility that we may have been used to further a political or personal agenda. We always go into our work presuming our clients have good intentions. We are now questioning these beliefs as it relates to SARS.

As a firm, we stand by the work we produced and the dedicated effort of our employees who wanted nothing more than to make SARS a better place. We will continue to cooperate with the Commission of Inquiry to support a process aimed at restoring SARS to the once credible institution it was once known as.