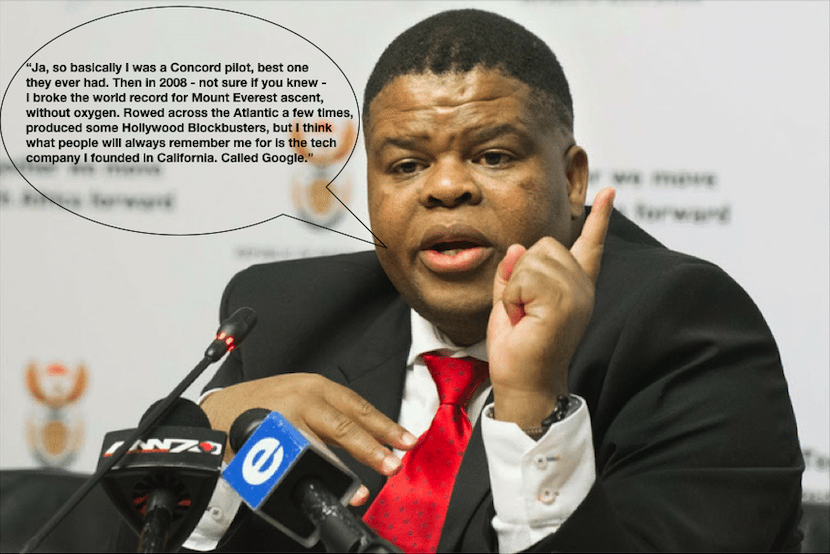 EDINBURGH — There’s a saying that there are lies, lies and then there are damned statistics. Something similarly appropriate can be said for political leaders, wherever in the world they might be. David Mahlobo, South Africa’s former minister of state security dominates headlines with allegations that he has been groomed by none other than Russia’s Vladimir Putin – who, it is claimed, has been pushing to get him the president’s job. Mahlobo became a household name when a scandal in 2016 erupted over his involvement in rhino horn trafficking. Guan Jiang Guang, a self-professed rhino horn trader, said, in an undercover Al Jazeera documentary, that he was close to Mahlobo and regularly hosted Mahlobo at his massage parlour in Nelspruit, Mpumalanga. Mahlobo has denied any illegal activity. Meanwhile, back in Blighty, woolly-pully Labour leader Jeremy Corbyn is irritating Simon Lincoln Reader for speaking with a forked tongue on a range of issues, not least of all religion and racism. It’s enough to make SLR hit the bottle. – Jackie Cameron

One way to escape Jeremy Corbyn’s icy grip on your attention, with all its spitting fury and foot-stamping indignation, is to head to the Gulf. Here you find everything Jeremy despises: glass, sun, steel, elitism, little bit of exploitation, cosmetic surgery, schedule 6 indigestion prophylactics distributed without prescription over the counter…oh, and Wagyu beef – as if you needed any more evidence of a major political movement being led by an insufferable dweeb – Jeremy hates Wagyu beef.

He only likes his Muslims Palestinian or Pakistani, so I don’t think he’d fancy the late Sheikh Zayed bin Sultan Al Nahyan much or rather, the other way round. Zayed’s legacy boasts of the kind of benevolence I imagine you’d witness if you were alive in Singapore in the 1970s, or in the early days of Sir Seretse Khama. The aviator-sporting Sheik was a cool operator – good-looking, cheerful and easily one of the wealthiest men in the world when he died.

With this is mind, I’ve calculated the closest Zayed ever came to Jeremy: 1 hour and 2 minutes, approximately the distance from the former’s Tittenhurst Park in Sunningdale, Berkshire (he purchased from Ringo Starr in 1989) to Jeremy’s vegetable allotment in East Finchley, where, if you want, you can witness the leader of opposition wearing shorts, black socks and sandals, wretchedly dragging around a bucket of leeks. If – if – the extreme whiteness of his nice little legs doesn’t blind you first.

Not the sort of place you find heavy-set Western European package tourists charging out of the breakfast hangar in speedos to conquer deck chairs by the pool, so perhaps you could help me: I am looking for a word in German that describes an organisation or institution that successfully procures substantial donations on the basis that it claims to advance or protect a specific interest, then turns around and does the very thing it claims to stand against?

This word, and I’m convinced one exists, would describe the Southern Poverty Law Centre in the US, an organisation that claims to stand against extremism. But last year it described British Muslim commentator Maajid Nawaz as an “anti-Muslim extremist”. Maajid is not an extremist: he dutifully threatened them with legal action, whereupon they balked – as cowards do – and paid him nearly $3.4m.

It would also describe the deceptively named Hope Not Hate in the UK, a group that claims to stand against hatred and the persecution of minorities – but have managed to agitate a whole lot of the stuff against themselves, not for exposing – or even shaming – real hatred, but I suspect for being peripatetic, shrieking divas obsessed with attention.

But it is today’s – Jeremy’s – Labour Party where this word would find its most appropriate application. The party that claims it was established on the principle of tolerance and non-racialism is now riddled with anti-Semitism, with more stories emerging everyday. The most harrowing feature of studying this is an event I found in South Africa’s post-apartheid history which appears to have significantly emboldened it.

Its a subject Alec Hogg and I will be discussing next week on a podcast.

The last time I was in this part of the world was in 2016 when I spent a week in Riyadh, Saudi Arabia. I must add I spent most of this week in pursuit of booze but annoyingly, I did not locate a single drop, not even from a Dutch diplomat, whose desk drawers I rifled through the night before my departure hoping to locate a bottle of something, not just because my hands were shaking, but because he couldn’t stop talking about himself. I think the desert makes you do that.

Not here though. Young black South Africans I meet, mostly working in hospitality, are ambitious, happy and endearingly, but not unexpectedly, a little homesick. They have been trained in places like Hong Kong, Vienna and Milan. Some are being posted to Florida and São Paulo.

Good and evil are never more than a few inches apart in the Gulf. There’s the UAE allegedly complicit in state capture: God knows how many billions of rands have been siphoned from the South African treasury and other departments into these obscure, dirty financial black holes. Then there’s the one that welcomes young South Africans, accelerates their careers and hopefully teaches them that travel, not land, is the only thing that really makes you richer.

On Al-Maryah Island I finally encounter a Zuma I like. The Russian barman at Zuma Abu Dhabi pours us cocktails. After three or four, the Muezzin’s beautiful, haunting wail echoes through the city, across the water.