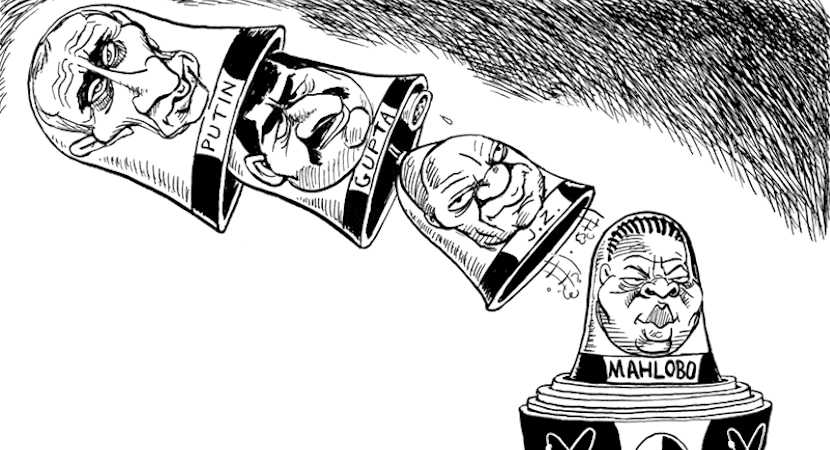 LONDON — South Africans of a certain generation were raised with the spectre of the “Rooi gevaar”. Our brothers were sent into a border war that they were told was to stop communism and the Soviets. I looked at the South African flag flying over the Kremlin in Moscow as a journalist covering a state visit in the 90s and thought, “Ha, you Russians are not so scary any more, are you?” But it seems my glee was short-lived as they are using social media to influence Western elections; we hope to soon learn whether they have in fact helped Donald Trump to become American President; and the full extent of the Russian influence in South Africa in the Zuma era is only now coming to light. Zuma tried to push through a nuclear deal, that would have indebted South Africa to Russians for years to come and were it not for the Pravin Gordhans, he may have succeeded. The latest SSA whistleblower to come to the fore has exposed how close former Intelligence Minister David Mahlobo was to none other than the big leader himself, Vladimir Putin. – Linda van Tilburg

The sworn statement by the whistleblower in the State Security Agency to Paul O’Sullivan reveals several references to Russian training and Russian money behind the efforts to spy on the enemies of Jacob Zuma and Russian backing for the ambition of David Mahlobo to become the country’s next President.

The whistleblower reveals that his training in Hazyview in Mpumalanga in what he labelled as a ‘parallel intelligence structure‘ was by a man called Markhov who spoke in a Russian or an East European accent. Markhov who “would visit occasionally and inspect the work that they were doing would often bring a bottle of vodka and instead of saying cheers, he would say “nastrovia” when they toasted each other. Markhov was also often the runner between their unit and David Mahlobo.

Other references to Russian links, came from one of the agents from the North West province who joked that “we should all learn to speak Russian.” Minister Mahlobo also promised that “at some point, you will all go to Russia for training.” The whistleblower describes how he met Mahlobo in person for the first time in 2017, but says they often spoke on the phone and how Mahlobo came to trust him and even asked him to set up a think tank on nuclear energy. He also acted as an intermediary to introduce Mahlobo to a Senior Manager at the National Nuclear Regulator.

In a direct reference of his relationship with President Vladimir Putin, the whistleblower relates in his sworn statement how Mahlobo described that “the Guptas have been trying to get him kicked out of power (and) that if it wasn’t for Putin he would have been gone by now.”

He said Mahlobo was trained in Russia and China among other countries and related how “when he was in Russia, Putin spared him at least an hour every second day.”

On his last day of training Mahlobo bragged that the Kremlin’s Politburo wanted him to be President of South Africa in the next five to ten years.” Mahlobo is said to have been bestowed the same honour by the Chinese who also wished him to become the country’s next President.

During the last meeting the whistleblower had with Mahlobo on 6 May 2018, Mahlobo suggested that “something huge is brewing”. It appears as if Mahlobo had a fight with the Guptas and that President Jacob Zuma’s son Duduzane Zuma threatened him with dismissal, but that he thought he was immune to that as “he reported to Putin and still does.”

Mahlobo also said he was in constant touch with both the Chinese and Russian leadership who “have invited him for political briefs in their respective countries.”

The name of another Russian link crops up in the statement, that of Vladimir Strzhalkovsky, a former KGB agent and Russian oligarch, who is also a close confidante of Putin.

Mahlobo said he had been in contact with Srzhalkovsky, whose cash would enable him to buy branches of the ANC because he believed ANC conferences are not won by popularity but by money. The aim was to systematically buy every ANC chairman and secretary, capture the NEC and then take over the ANC and the country.

It appears that Mahlobo started having difficulty paying his spies because the whistleblower relates how pleas for payment were ignored and Mahlobo promised that “money would be pouring in from China and Russia soon.” The figure of R5bn channelled from Russia to Mahlobo’s campaign is mentioned.

If the claims by the SSA whistleblower are indeed true, Russia’s bid to increase its influence in South Africa and install its preferred candidate have not been successful.

There is however ample evidence that Russia is trying to increase its sphere of influence in Africa again. In an article by the Economist on the new scramble for Africa, it is revealed that Russia has signed 19 military deals with African states since 2014 and Africa’s trade with Putin’s government have quadrupled from 2006 to 2018.

The terms of many of these contracts with Russia and China are not transparent. When three Russian journalists tried to probe a “Kremlin-linked mercenary outfit that reportedly protects the president” of the Central African Republic and his mining activities, they ended up dead.