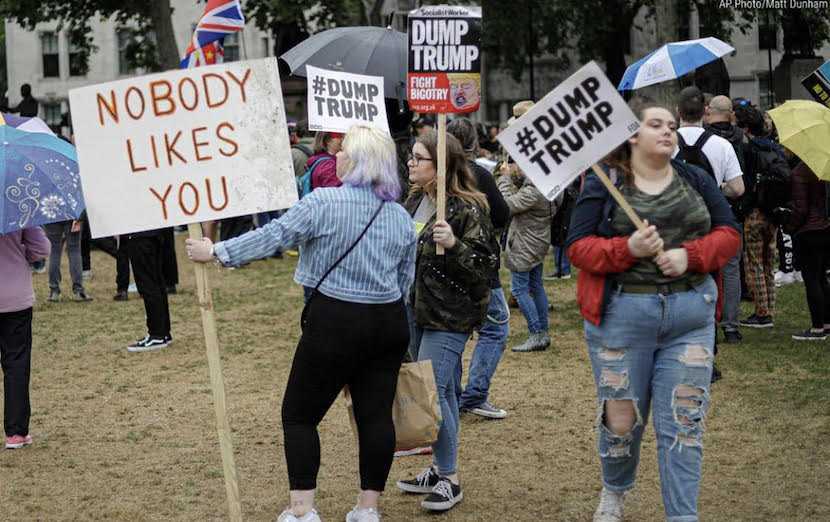 Nobody gets out of a Trump visit to London without a spike in their heart rate it seems. Even our very own regular columnist Simon Lincoln Reader, while not exactly being “milk-shaked,” by anti-Trump protestors, attracted some expletives by having forgotten a small American flag lapel-badge on his collar. No fan of Trump, Reader is very objectively, also not a fan of the Labour anti-Brexit lobby whose members dominated the placard bearing protestors, seemingly prepared to “donner” Donald. Luckily for Reader, a British police woman constable politely asked him to “walk with me,” away from the madding crowd. Great crowd-calming skills, if you view some of the YouTube videos showing the very opposite of that much-admired British quality, civilised restraint. Shocking as it is when an elderly (presumably pro-Trump) man gets knocked to the ground by protestors, it’s still a great deal less brutal then when opposing South African groups clash. Read on for a right royal Reader ride. Trump perhaps personifies the most satirical and cynical of comparisons between Great Britain and the United States, highlighting differences rather than mutually shared qualities. – Chris Bateman

Notes from the anti-Trump protest

Donald Trump is eleven minutes from landing when he savages London’s Mayor Sadiq Khan on Twitter. There’s nothing factually contentious about the remarks: Sadiq is an awful Mayor and he is extremely short. But moments such as these prompt my interest in those who will shamelessly respond on Sadiq’s behalf.

Last year at The Spectator summer party I listened to a historian explain just how trivial the job of Mayor of London is – those who leap to Sadiq’s defence, mainly middle class, handsomely-salaried public sector types do so as nothing more than tribute to the identity politics that have swamped our age.

Tuesday. Its going to rain on the so-called “carnival of resistance” assembling at Parliament Square. Those lined up to speak from 14h30 include Emily Thornberry, or Lady Nugee, the Labour MP for Islington South who detests parents who send their children to private schools despite doing so herself. There’s Clive Lewis, another Labour MP who regards all Brexiteers – presumably non-white Brexiteers too – as racist. Jeremy Corbyn will address the protestors having declined the invitation to attend the State Banquet. Later he will be exposed for having requested a meeting with Donald – but shown his bike instead.

On the subject of Jeremy and Lady Nugee: a number of Somali refugees living in Islington have taken the extraordinary step of removing their children from state schools to send them back to Kenya or Somaliland where they can complete their studies safe from gangs and knife crime.

For a meeting with some visiting Americans in the morning, I wear a US flag lapel pin that my wife gave me. Many of my American friends, including some of my American family, do not like Donald, but feel his treatment at the mouths of some of the British elite is appalling.

Shortly after midday I make my way to Parliament Square through St. James’s Park but stop on Birdcage Walk to answer my phone. I notice two lanky students carrying banners, eyeing me up as they sit on the railing. The banners, both featuring Australian flags, accuse Donald of being a racist and “denying the climate emergency”.

“Hey”, one of them shouts in a bogan accent pointing at my chest, “f*** off with that”. I’d forgotten about the lapel – that was absent minded – but happily I’ve been curating a reservoir of Australia-particular insults ever since I visited that s!*$hole in 2013. As I am responding a female PC nearby shuffles across and requests I walk with her. Given enough time, I would have explained to these two that one of my fantasies involves a world where Australia has swapped places with France on the map. In this same fantasy I’m an RAF Wing Commander returning home on a south-westerly route having just shelled the crap out of the Germans but with a couple of bombs to spare. Who knows what would happen next.

In the nerve centre of the modern British protest, a number of things hit you. First, the sense of anger. Deep, noxious, spitty, shaking, dissimulating, malignant rage. Second, the demographics – mainly whites of course, the kind that support Sadiq Khan and David Lammy. The third is a sense of curiosity: how can so many people, none of whom are, by appearance, impoverished, attend a rally on a school day in civilian (if not strange) clothing? The fourth are the insults – “nazi scum” and “fascists” being the most popular.

Why the anger? There’s a simple explanation: Donald Trump is the tradesman’s President, not the luvvie’s – he doesn’t care about left wing actors or commercially expedient CEOs with “progressive” views, but he does care about the survival – and sustained prosperity – of the middle class, a group many other governments (including South Africa’s) seem intent on throttling. This threatens the entitlement complexes of unnecessary imposters like gender studies and climate hysteria. He is non-compliant, politically incorrect, brash, louche and unpredictable – all the things you would expect of a man who has met, many times, with failure and success in New York real estate, ground zero of contemporary capitalism.

Eventually all the things you notice about the protestors converge into one single overwhelming feature: snobbery. These people consider themselves culturally superior, an educated class possessed of peerless wisdom. Apparently resentful of British history, here they are prepared to ape the worst of its recesses with smears, aggression, screeching, censorship and even violence.

The last time I stood on the Mall during a State Visit was in 2015, when China’s Xi Jinping came. Today campaigners allege that over 2 million Chinese Uighurs and other Turkic Muslims are imprisoned in “re-education” schools across the Xinjiang province. But, crickets.

Away from the worst of it, there’s the best: the 75th anniversary of D-Day in the war in which my late grandfather distinguished himself, where actual nazis were machine gunned and real fascism was dismantled. Seen through history, the commemoration of Her Majesty’s generation of courage becomes a demonstration of power in mine – two great countries meeting again in one of the world’s most beautiful capitals, an exercise of meticulous, dignified co-ordination.