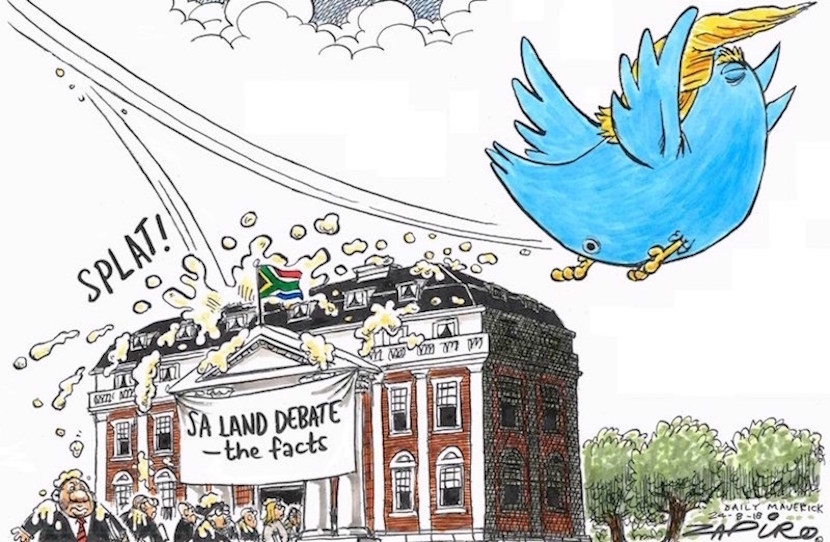 A vast body of research is devoted to understanding the power of Donald Trump’s Tweets. Communications and political studies experts have been exploring the changing character of public discourse in the Age of Twitter, some noting that its success is because it is simple, impulsive and uncivil. Others have marvelled at how Twitter can be used as a weapon of authoritarian capitalism. Rex van Schalkwyk, a retired South African judge with a wry sense of humour, has had a go at demystifying Trump’s Twitter tirades, too. In this futuristic piece, he brings home how easy it is to cause international havoc through a few Tweets. – Jackie Cameron

The rule of Twit

(In the year 2025, in the New World Order, a colossus bestrides the globe: the president of the New New World, who rules from his secure bunker located in Washington DW [District of the World] making use exclusively of a now antiquated device still called by the silly name, Twitter, to issue his portentous decrees.)

President Prunt, lately of the esteemed Wall Street bankers, Prunt, Prunt and Prunt is contemplating his hand-held device to which his once-juvenile habit has addicted him. Then he is moved to action. With surprising dexterity he types: “I will no longer tolerate the defiance of that bloated oaf, Wing Hue. I give [him] just three days to accept my demands, if not… well then you will know the consequences of my rage.”

He sits back in his throne-like recliner, contemplating the surround screen. After a short while he gives a self-satisfied snort and hits the send button. He presses another button on the console of his throne and a female voice answers: “Yes, Mr President”. “Send the Veep in to see me… right away”. “But Mr President, he is in China negotiating with President Hue”. “In China. Who said he could go there?” “You did, Mr President, you sent him there to secure a deal…” “When does he return?” “The day after tomorrow”. “That’s in three days’ time!”. “Well, yes, Mr President”.

With only minutes to spare Vice President Heap returns to Washington DW, empty handed, and is immediately rushed to the bunker in a convoy of fifty black levitators and their escort.

“So, for your efforts, you achieved nothing at all”. “Well, Mr President, not nothing… I did get President Hue to consider our proposal, but then came your twitter message…” “What are you saying man. That my ultimatum spoiled our chances… I hope you are not saying that”. “Well, no Mr President. I am not saying that at all; only that after the message they were less convivial. They even moved me from the presidential mansion.” “Rudeness, eh, so they became obnoxious. That’s what I would expect of those primitive types. Well, that’s another reason… very well, Heap, you may leave”.

As Heap retreats Prunt punches the console button. “Yes, Mr President”. “Send Secretary Bolt-On to see me”. “The Secretary of Defence is in New York Mr President”. “New York, what is he doing there?” “He is addressing the United Nations Security Council, Sir”. “Well, no matter, I will do it on my own…” “I beg your pardon, Sir?” “Nothing, nothing at all. I was thinking aloud”.

For some minutes the president contemplates the device held in his hand, and then he types: “The Middle Kingdom – I don’t know why it should be called that because soon it will be the Kingdom No More – has defied my ultimatum. Consequently, and with only slight reluctance, I shall issue an order that a limited nuclear strike is to commence, to blast the Middle Kingdom to kingdom come, at precisely 12H00 Washington time on this day, 15 September 2025”. After only a moment’s hesitation he hits the send button.

Read also: SLR Diary: Donald Trump has been unchained – and other tips for politically neurotic

He then uses the Red Hand-Held Device to send a simultaneous message to the commander of the Sixth Fleet stationed in the Sea of Japan, and one to General Overshott, the commander of the Strategic Task Force at the Pentagon. “I have this day authorised a limited nuclear strike under Pentagon Protocol No 267GQ for implementation at precisely 12H00 Washington time on 15 September 2025”.

Minutes later a breathless Heap is standing before the president. “Mr President, you have just declared war… a nuclear war… on Twitter!”. “So?” “There are procedures… diplomatic procedures to be followed. There is a protocol, and… and there is the question of authorisation”. “What do you mean, protocol, and authorisation. Am I not the Commander in Chief, am I not in charge?”

By now Heap is almost hysterical. ”Mr President, a nuclear strike of any kind requires co-authorisation”. “Co-authorisation, by you, of course”. “Yes, Mr President”. “Well, give your authorisation. You can give it as we speak”. “No, Mr President”. “NO, YOU MEAN YOU REFUSE?” “I do not refuse, Mr President, I only need time to consider, and possibly, to consult”. “Consult, who are you going to consult with? Damnit man, you are the vice-president. Who, tell me, who would you consult with?” “My staff and possibly with my wife”.  “YOUR WIFE. YOUR WIFE, what good would that do you?” “She is a wise woman, and I trust her judgment…” “The vice president consulting his wife on whether we should declare war! Is she privy to all the facts of the case? If so, are you not in breach of the Official Secrets Act?” “That is a most unfortunate aspersion, Mr President. You know me better than that”.

“You know David”, the president says conspiratorially, “I personally selected you as my running mate because I saw in you a candidate most like myself: decisive, confident, a leader of men, a winner. Don’t disappoint me now”

“Mr President, if you go ahead without my authorisation, that would be illegal. You would be breaking the law. Think of the possible consequences.”

“The law, the law”, he shouts, “in foreign affairs – and in the military (he adds by way of an afterthought) – I am the law”. He points to the device and adds, “whatever I declare on that… that (the word has forsaken him) on that twit… that is the law”.