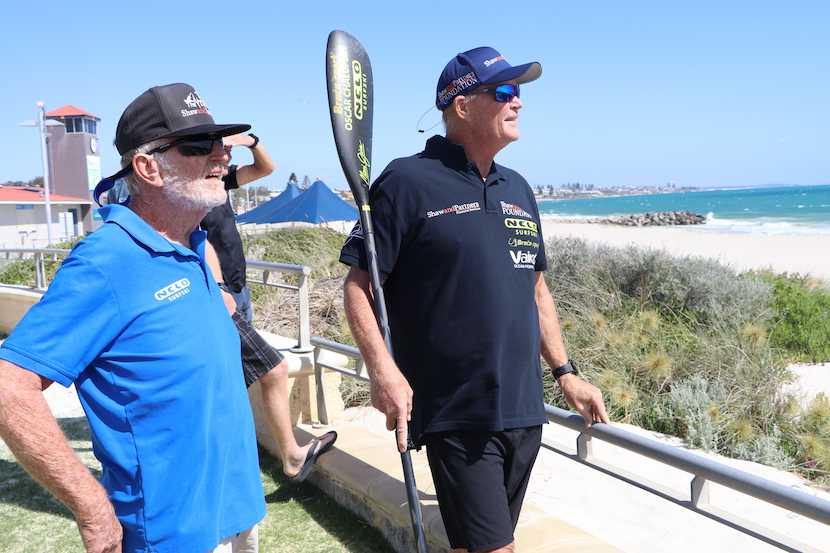 Oscar Chalupsky is one of South Africa’s most successful sportsmen. A world class paddler, Chalupsky has dozens of trophies and titles to his name, as a trawl through his awards and titles attests. His achievements range from youngest Springbok lifesaver in 1979, South African Junior Sportsman of the Year (1981), South African bodyboarding champion (1983) and South African Iron Man (1984) to winning the worldski paddle championships at least eight times. Also a coach, he has passed on his skills and techniques to many others in the paddle sports world. As seasoned sports journalist Dale Granger points out: Chalupsky appears to be taking on his greatest challenge yet, as he consults doctors about a tumour. – Jackie Cameron

Oscar Chalupsky fronts up to cancer battle with trademark tenacity

Friends, rivals and sporting comrades from all over the world have rallied to the ‘Team Oscar’ battle confronting South African champion sports star Oscar Chalupsky, who is now facing one of the biggest races of his life to beat what could be bone-marrow cancer.

Just two days after finishing 34th, at age 56, in a star-studded fleet of almost 500 paddlers in the 27km Doctor race offshore Perth, Chalupsky flew home to Porto in Portugal 12 days ago to front up to the grim news that scans had revealed that he had been carrying a tumour for almost a year and that pain in his ribs was the likely the source of his ailment.

Last week Biznews carried a feature story on Oscar and his 82-year-old surf ski pioneering father, Paul, who also finished the Doctor race in a double surf-ski and beat almost 100 paddlers to the beach at Sorrento – along with younger brother Walter, who competed on a single-ski in a race of significance for the Chalupsky family.

Oscar had been aiming for a top 20 finish in The Doctor and his 34th finish had prompted a cynical reaction from one Australia sports writer who commented: “Hey, I thought this guy was the (surf) king?” Inferring that his performance in the race had not lived -up to his legendary sporting status.

Having known Oscar for over 30-years and that he would never give less than 100%, I replied: “Well he is 56, he has won the race three times and heaps of others that you can barely count.”

My follow up comment this week was: “How many guys do you know, at Oscar’s age, who have had (potential) bone cancer for a year who could finish 34th in an internationally sanctioned endurance event up against the best paddlers on the planet?”

Five days before the race medical scans had revealed Oscar’s tumour, but he said nothing about it in Perth and entered the Doctor with the trademark courage and commitment that has defined his sports career and earned him the captaincy of the South African team returning from sporting isolation to the Olympic fold in 1992. The same attitude was reflected in Oscar’s determination from his hospital bed in Cape Town this week to beat a disease that only started revealing symptoms in the past few weeks.

From Portugal Oscar flew straight to Cape Town on Monday for specialist medical tests and a prognosis which will only be fully revealed in about five days.

Nevertheless, Oscar posted a picture of himself smiling yesterday with a report from his doctor commending his fitness and courage, and commented: “I am the only person in the world to win 12 Molokai races.”