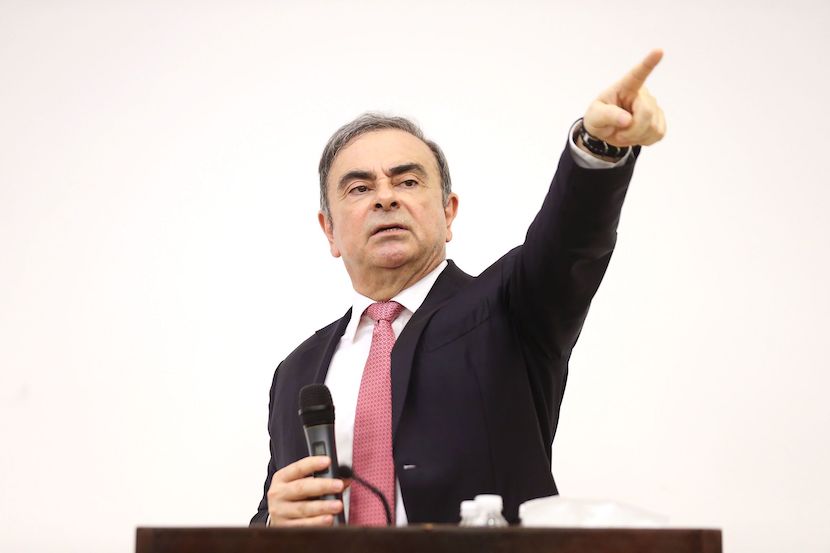 Carlos Ghosn, the former Nissan boss who fled from Japan, in the type of box pop stars use to transport their musical equipment, wants the world to believe he is a fugitive from injustice. South African satirist Chuck Stephens has scrutinised the details of the well-connected businessman’s dramatic getaway through heavily-manned borders. He notes stark similarities between the way Ghosn is positioning himself as having the high moral ground and the way treason trialists put apartheid on trial. Is Ghosn really a victim of injustice who needs to be protected from the evils of the Japanese criminal justice system, which until now was of little to no interest to the global business community? Chuck Stephens reckons Ghosn, and his fans, should take a close look at that famous Zapiro cartoon of former president Jacob Zuma slaying Lady Justice. – Jackie Cameron

He was furious from the moment he started to speak at his press conference. He had been held for 400 days in Japan – at times in solitary confinement, at times under house arrest. Then he staged a daring departure to Lebanon, via Istanbul, which sounded a bit like a James Bond thriller. According to him: “I did not escape justice, I fled injustice”.

"I did not escape justice. I fled injustice and political persecution"

Nissan's ex-boss Carlos Ghosn says fleeing Japan was the "most difficult decision" of his life, but that he was "resigned to impossibility of fair trial" in that countryhttps://t.co/DEPq1zl6uP pic.twitter.com/ZNDoNbkxK1

Listening to him reminded me of the Treason Trials, here in South Africa. The trialists, including sages like Walter Sisulu and Nelson Mandela, decided that while the State was putting them on trial, they would try to turn the tides – and put apartheid on trial.

Ghosn is Lebanese, and he has passports from France and Brazil as well. I share the same name with him, so depending where I am, I get Charles, or Carlos, or Chuck. His track record with Renault in France, Nissan in Japan, and then Mitsubishi, speaks for itself. He is the personification of Globalisation.

Lebanon has no extradition agreement with Japan, so he is safe there for now. This reminded me of the Gupta brothers hiding out from South African justice in Dubai. They are originally from India, but if they went “home” they could be extradited to South Africa. So why did they not do what Ghosn has done? If they are innocent, as he claims to be, why don’t they go public about it? Food for thought.

Ghosn says that “presumption of guilt” prevails in Japan’s justice system. He described in detail various injustices that he was subjected to. For example, days on end in solitary confinement, only two showers a week while in detention, and having no access to medications. He was only allowed to spend two hours with his wife in nine months, and when they met, a lawyer had to be with them, listen to what they said, and report on it to the prosecutor.

He ridiculed the charges that were used to arrest him. Ostensibly, he did not declare on his tax return a bonus that was due to him. Even though it had not been calculated by his employer at the time that he filed his tax return, so the amount had not yet been fixed, and above all – it had not been paid to him. He denies all allegations against him, saying that he was “set up” by collusion between some senior executives at Nissan and the state prosecutors. He named three Nissan employees as business adversaries (by then he had moved on to Mitsubishi) and he described government officials as xenophobic. He says that the equivalent of our NPA in Japan has a 99.4 percent conviction rate – and he reckons that it is higher for foreigners!

I resonate with this articulate man, not just because we share the same name in three languages. When he said “they were trying to break me” – that is my personal testimony for the injustice that I have suffered at the hands of the justice system in South Africa. Starting with the police, and moving on to the state prosecutors in my home town. It is a toxic mix of jealousy and xenophobia.

He said they didn’t treat him as a human – he said that he felt like an animal or an object. Personally I have been treated like an alien. After I paid Lobola to the family of a pleasant woman, she suddenly closed ranks with her family and refused to move in. They said that she could not move in until the marriage was registered at Home Affairs. But she was too busy working to accompany me there. Then I found out that only one partner can register a customary marriage, so I went there. I was referred to the Immigration Officer, who promptly told me that customary marriage is only for “indigenous people”. He bluffed and bullied until I came to believe that he may have received one of the nine cows that I had paid, out of the fifteen cows agreed to in writing.

Ghosn named and shamed his Nissan adversaries, but he would not dare to name any government officials because of the possible consequences. His wife was arrested in Japan, nine months after the incident causing her arrest, but just one day before his press conference in Beirut. Go figure.

I could name names of policemen who contrived my arrest, by tampering with the police docket. I can name prosecutors who have tried to contrive criminal charges against me that could lead to my deportation as a Permanent Resident in this beloved country, where I have lived longer than I have lived in any other country.

I could name names of gangsters who the policemen and prosecutors collude with. In fact, the collusion of the justice system officials with jealous Nissan executives is at the heart of Ghosn’s declaration of innocence. That got him arrested, then the justice system closed ranks around the presumption of guilt. It sounds just like my experience in South Africa, Babe Ghosn. Thank you for your courage and resilience, and for giving me a platform to speak from. Japan is not the only country whose justice system suspends civil liberties and protects the patronage networks.

Chuck Ghosn, have you seen Zapiro’s cartoon of ex-President Zuma and Lady Justice?