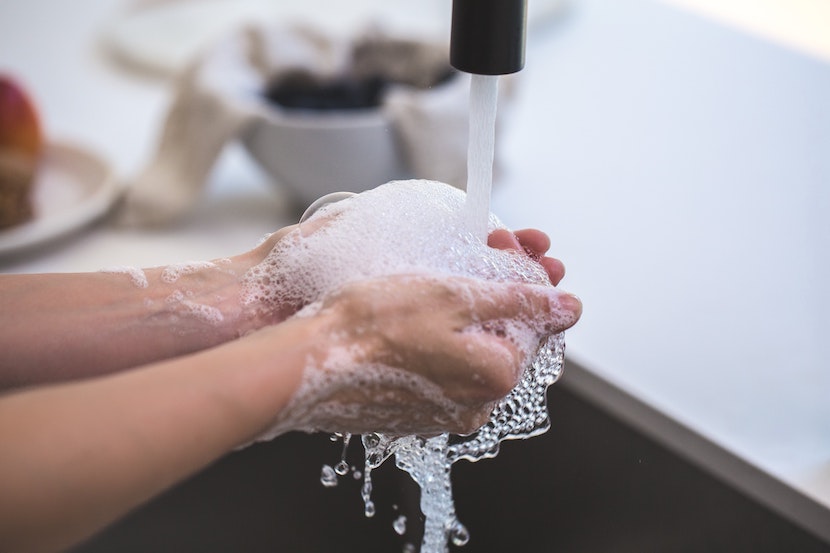 Thanks to the old-fashioned hobby of bridge, which I picked up when I was an 18-year-old student at Rhodes University, I find myself in regular contact with elderly card sharks. The nuances of the game keep minds sharp, but fastidious personal hygiene has never been in evidence at the various bridge clubs I have visited over the years. It’s an open secret that most men do not seem to wash their hands after a visit to the bathroom and that means you don’t want your hands to be where their hands have been – door handles, cards, pens, and the snacks at break time. Which is why I’ve always had anti-bacterial gel handy at the card table. So it comes as no surprise to me that there are official stats backing up what female bridge players have known all along: at best only two out of every 10 South Africans wash their hands when they should, or do it properly. – Jackie Cameron

Yes, washing our hands really can help curb the spread of coronavirus

By Karen Hofman and Susan Goldstein*

Much of the media discussion about coronavirus revolves around diagnosis and management of suspected cases. But the first piece of advice that is essential for anyone worried about contracting the coronavirus is something your grandparents might have suggested: wash your hands. It’s at the top of the list of many of the players trying to prevent the spread of the disease. This includes the World Health Organisation (WHO), the US Centers for Disease Control and Prevention and other health authorities around the world.

But, ask the cynics, could preventing the spread of disease really be as simple as washing my hands?

The answer is yes. Because the science says so.

Hand washing is a tried and true, scientifically proven preventive strategy that reduces the likelihood of transmitting both viral and bacterial borne diseases. It has been shown to decrease both respiratory and diarrhoeal diseases in countries across the world. One review found that hand washing reduced diarrhoea cases by 30%. This is because it prevented bacteria being transmitted from faeces to the mouth.

It may seem like a low-cost – and incredibly simple – intervention. But not emphasising it would be a huge missed opportunity.

The American Centers for Disease Control and Prevention recommends the following five‑step approach:

Do this multiple times a day, especially before eating. Using hand sanitiser is another option, as long as it is composed of 60% or more alcohol.

The benefits of hand washing over other preventive measures are clear: soap is easy to access. Both soap and an alcohol-based products for cleaning hands are cost effective interventions.

But millions of us don’t wash our hands as often and as well as we should. A study done in South Korea indicated that 93.2% of 2,800 survey respondents did not wash their hands after coughing or sneezing.

The current outbreak of the new coronavirus disease (COVID-19) was first reported on 31 December 2019 in Wuhan, China. By early March 2020 more than 90,000 people from 71 countries had been infected. More than 3,000 people have died so far. It is not clear what the fatality rate is and this may not be known until the outbreak is over – but it has been quoted as around 2.5% by the WHO.

Other diseases carry much higher fatalities. For example, tuberculosis claims the lives of 4,100 people worldwide every day. And the Ebola virus fatality rate is 50%.

Nevertheless, the spread of the new virus has set off alarm bells, with China famously building two hospitals in 10 days, cruise ships being quarantined and cities effectively being shut down.

The reason for the panic is that Corona-19 (more correctly named SARS-CoV-2) is a newly discovered virus. We don’t know exactly how infectious it is or who is at risk and why. As the WHO director-general said: we are entering uncharted territory.

Apart from hand washing it’s important to try not to touch one’s face and not shake hands. Face masks are really only useful for those who already have the virus or are caring with someone known to have the virus. Proper use of face masks is explained by the WHO.

Consideration should also be given to the fact that a run on medical masks could cause a shortage for public health-care workers who need them for protection against other diseases such as drug-resistant TB. This is particularly true in South Africa.

What the science says about hand washing

Research shows that hand washing isn’t just effective in preventing transmission of coronavirus. MIT recently conducted a study to identify the most effective mitigation strategy for hand hygiene that could contribute most to the reduction of global epidemic risk. Researchers used modelling and data‐driven simulations.

The study found that if 60% of travellers moving through airports worldwide had clean hands, global disease spread could be curbed by almost 70%. And if this rate could be maintained in only 10 of the busiest airports internationally, an astounding 37% of infections could be prevented.

Research has also shown that hand washing can prevent about 30% of diarrhoea-related sicknesses and about 20% of respiratory infections. Some scientists go as far as to argue that 80% of diseases can be prevented by proper hand washing.

Not everyone is convinced. Hand washing has been treated with scepticism as a significant disease prevention and eradication measure by some who favour “hard science interventions”.

This is not without precedent.

A Hungarian-born physician in the mid-19th century, Ignaz Semmelweis, was ostracised and shunned by his colleagues because he was so bold as to make a link between decreased maternal mortality and hand washing for doctors who went directly from the dissection halls to deliver babies.

Despite the growing body of research showing its effectiveness, hand washing habits are inadequate.

The MIT study assumes that 30% of people do not wash their hands at all after using a bathroom, and that correct hand washing is practised at such low rates that only 20% of people in airports actually have clean hands.

In South Africa, a national hand hygiene behaviour strategy estimated that only 20% of South Africans washed their hands with soap at critical times such as before, during and after preparing food, after going to the toilet, after sneezing or coughing, after touching animals, after changing nappies of babies, and after caring for an ill person.

Hand washing is simple and should already be part of everyone’s daily routine. If it became a habit for everyone in the world, it would not just prevent mortality and illness from coronavirus. It could be the start of a more viable strategy to prevent death from other bacterial and viral diseases.

While the full implications of this global pandemic are still unfolding, and a vaccine has yet to be developed, we need to act without delay using the one tool we already have.