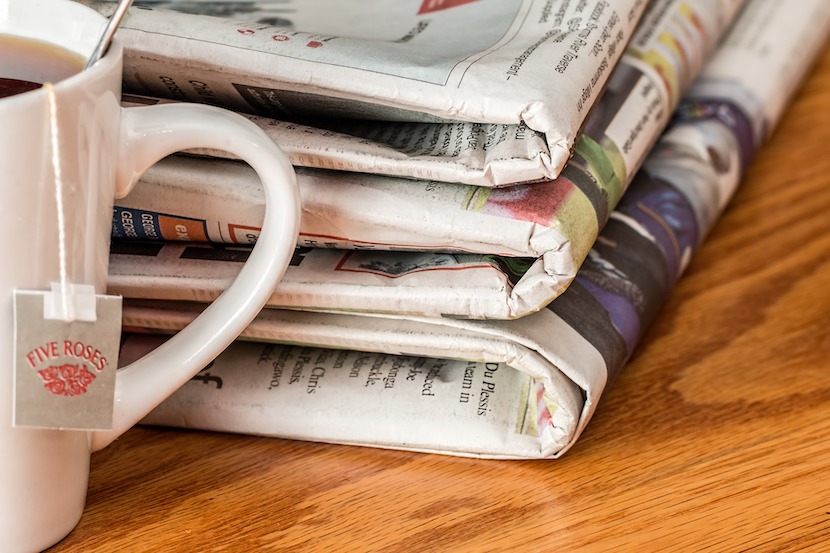 Who killed the South African media?, asks Simon Lincoln Reader. The columnist goes through a number of suspects – Covid-19, the rise of social media and even local media moguls. Before ruling out any of the accused, Reader hops over to American and British media that, by his account, sorely lack in objective reporting. ‘When the Guardian and the Independent (amongst others) started demanding the subversion of democracy, the fractures increased in size’, writes Lincoln Reader. Below, the London-based writer dissects South African media, to determine who put the final nail in the coffin of South African media. – Jarryd Neves

The great big messy Toyota HI-ACE / pantechnicon / juggernaut pile up of South African legacy media we have been anticipating ever since its cousins in the west suffered the same fate finally occurred on Monday. But not all the clues found in the wreckage of the circulation decline of every single major South African broadsheet will be treated equally: some will argue that its all Iqbal Surve’s fault, others will point to Tony O’Reilly way before him. Some will blame it on the rona – which holds truth – others will emphasise the role Facebook and Google have played: long before 2020 these filthy parasites were bona fide anti-media viruses. The more forgiving will lament the inability to adapt a suitable business model.

Without excluding any of these forces, especially oily Iqbal, I would like to explore another factor responsible, one that will be least spoken of. In the context of the smash – nobody less than a pissed driver who might not have caused the accident, but made it worse, then left the scene.

But first. I spent the best part of January / February watching the lead up to Donald Trump’s second impeachment trial on American television, and reading about it in some of their unspeakably poor newspapers. The most farcical aspect of this outrage-porn farce was when Democrat perps were caught fabricating evidence.

The day after, I scoured through the New York Times and USA Today looking for the incident. Even by their standards, the coverage was breathtaking: “there was a minor administrative error which Republicans and their far-right supporters have blown out of proportion” and “a distraction from charges of domestic terrorism”. As if another example of sleazy bias was needed: Democrat impeachment managers had been caught red-handed committing a criminal offence – and their media supporters had breezily dismissed it. Think CNN’s complicity in covering up New York Andrew Cuomo’s rona genocide cover up – and then double it.

The same journalistic logic applied elsewhere in the past? ‘A warrant for the arrest of film maker Roman Polanski on charges of sodomising a minor in a bath has been issued – but chill as “reliable sources” have told us that its totally a stitch-up because the minor was loving it.’

Who the hell are these people?South Africa may look at this week’s circulation numbers and remember Piet Rampedi, Phylicia Oppelt, Steven Motale, Stephan Hofstater, Mzilikazi wa Afrika, Verashni Pillay, Pinky Khoabane or any other scoundrel in recent years, but this would be irresponsible. Whilst these people have undoubtedly contributed to the decline in trust, particularly during the Zuma mistake, another, more slippery imposter reveals itself here, one aligned to the behaviour of legacy titles in America and the UK, that is lovingly coddled by Big Tech – to the point where today we can no longer distinguish between media and Twitter media.

This is not an individual, or individuals, but an instruction – a demand to readers and followers that they think in a very specific way, consistent with the thinking the writer / editor, in a place intolerant of objection.

In Britain and America, this thinking worked in the open, shielded to some extent by the shock of unexpected world events. When the Guardian and the Independent (amongst others) started demanding the subversion of democracy, the fractures increased in size. In America, the New York Times, which is basically run by a child militia, one-upped this last year by attempting to split a country into two clear groups: those who believed in its crappy, hysterical and dishonest 1619 project – and those who didn’t. In both cases, the media revealed its ambition to join politicians as the chief dividers of society, complicit in making the world hate itself as much as it presently does.

In South Africa, the thinking worked quietly, until it couldn’t – until personalities infected by English-speaking foreign counterparts could no longer resist a desire to be included in a fake liberal “resistance”, so exploded over us like baboons sent to test minefields. In 2017, Hillbrow’s resident idiot Nickolaus Bauer deliberately circulated a fake image and accused farmers marching against attacks of racism. In 2020 dishevelled loafer Chris Roper launched a vicious attack on Helen Zille accusing her of being more of a threat to South Africa than the EFF Janjaweed. In 2021, Roper’s successor at Mail and Guardian, Sipho Kings, stated publicly: “Transformation as ethics. The fourth estate is so important and also able to do so much damage when it doesn’t do better. Our institutions need to demand more. And we – in media – need to introspect, discuss and improve. Especially if you’re a white man. We must do the work.”