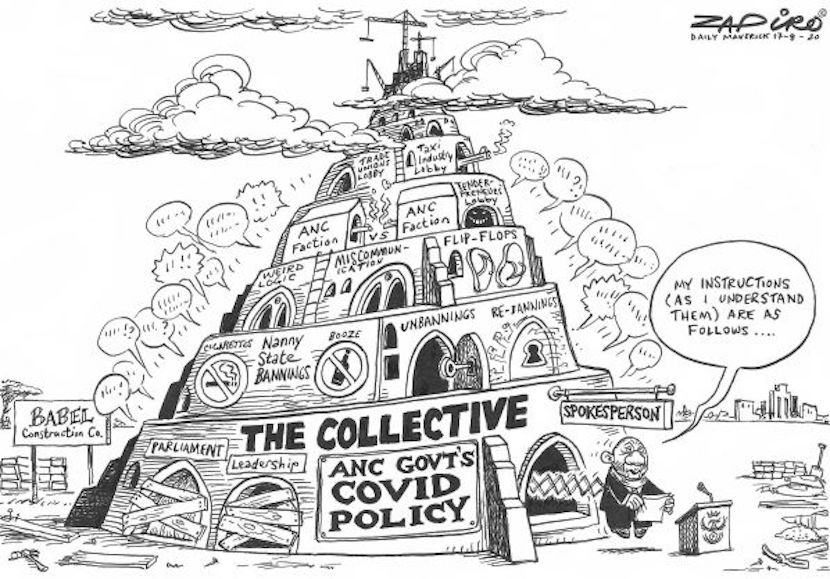 South Africans are consumed by the country’s fight against corruption and the disgusting rot it uncovers almost daily. Even as we battle Covid-19, certain individuals see fit to plot and steal. This deep infection has been killing the country slowly for decades. Angry citizens seem to think that this sickness is unique to our nation. Simon Lincoln Reader unwraps some of the festering corruption where he lives in the UK and demonstrates how this disease is most certainly a pandemic. Its symptoms are the same in the first world as they are in the third. – Melani Nathan

Zondo Commission for the UK

Once a decade, the New York Times attempts to argue against the widely accepted conviction that its only purpose is to be stuffed in a rescue hatch marked “EMERGENCY BOG ROLL – USE AS LAST RESORT AND ALWAYS WITH PREP CREAM APPLIED GENEROUSLY” in a bunker 50m below earth’s surface in an area as yet unmapped by Grand Emperor William Gates and his beautiful assistant, Chelsea Clinton.

Just like the Guardian, the newspaper spends 520 weeks trying to destroy society by publishing the lies of proven liars. 1 week is afforded to unifying it; its like we all congregate in the foyer of the The Gray Lady’s offices staring at holograms of Christopher Hitchens, listening to speeches by Alan Johnson and nodding our heads (some of us leave before the tofu and Greta Thunberg’s performative dance solo entitled: “Climate Change caused Black Hawk Down”).

Last year’s gathering was prompted by the NYT’s revelations surrounding the UK government’s spending on Covid-19 related contracts. It found that of the GBP22b spending spree, GBP11b went to contacts of Conservative party politicians. Here it managed to bring the sensible right and left together, capitalists and socialists – all united in disgust at the greasy pandemic of cronyism rampant within the Civil Service and within the Conservative party.

When Alec agreed to let me write for him in October 2018, one of the more serious objectives I wanted to accomplish was to show that whilst no amount of equivalence will ever substantiate corruption, the UK, the EU and the US are up to their necks in it – the only difference is that the establishment in the latter have more-or-less successfully masked theirs. I did this because despair was – and still is – seeping through South Africa; if analysis of corruption doesn’t extend all the way to DNA, and obsesses only on local, superficial features, then a layer of something totally unhelpful like race can be applied.

Base excesses associated with power have not changed; what we’ve witnessed in the last four decades is a variation of theories featured in Arthur Koestler’s 1967 Ghost in the Machine, where crafted but misleading appearances including reason, tolerance, and the pursuit of justice front raw impulses.

The details of Tory Covid largesse: of the GBP11b, GBP6b went to companies with no experience in production of medical-environment protective equipment (among the beneficiaries: a jewellery designer and a fashion designer). More than GBP5b was awarded to companies like Honeywell, a company whose name cannot be mentioned without the mentioner holding their nose, or gagging. This company has been linked to one Paul Clive Deighton, otherwise known as Lord Deighton, who, unsurprisingly, started his career in banking (met his wife at Goldman Sachs – fun) and, like Dido Harding – the useless, upwardly-failing management consultant charged with Britain’s technical response – finds himself sliding off the wall in the passages that link Britain’s political nerve centre to its chums.

What? Do you think this is better than Brian Molefe scurrying across a runway with shoeboxes of cash onto a Zuma wife chartered flight? Is it because of Lord Deighton’s corduroys? Because some of these people speak as though they may have had a consensual encounter at the age of 12 in the showers of their all boys public school?

Although UK government didn’t wheel out a whimpering moron sweating spinal fluid to talk about fire pools, it did about the equivalent in a printed response released by the Cabinet Office. “We were under so much pressure”; “these were unprecedented times and we were inundated with offers to help” and “we maintain that no safety was compromised”.

None of these denials justified why one of these offers came from private WhatsApp messages sent to Health Secretary Matt Hancock from a publican friend of his (venue name: “The Cock Inn”) – and was ultimately successful.

It was way back in April 2020 when these offers started smelling foul, and calls for a commission of inquiry landed – on both the shadowy procurement drive, and the government’s response to Covid. But the idea this could lead to prosecutions is manifestly delusional: the British enjoy printing big signs in regal fonts “The Iraq Inquiry” or “The Leveson Inquiry”, hoping that colours and flowing cursive will appease public frustration (The Iraq Inquiry – also know as the Chilcot Inquiry – took over 7 years, concluding with a gentle censure for Tony Blair – clearly not enough to stop him now being front and centre of the present “build back better” grift).

Furthermore, if the UK government takes the same approach to accountability as it is currently taking to critics and skeptics of its lockdown policy, the prospect of justice or transparency is impossible. The Conservatives are intentionally targeting – gaslighting – critics, clearly emboldened by what it sees those 3 or so idiots at Twitter doing.

The NYT has revealed that what links the sensible right and left is stronger than what divides them. It also reveals that if the left and the right are the same here, then the likes Brian Molefe and Dido Harding are too.

So thank you – now piss off and go play with your cats again.