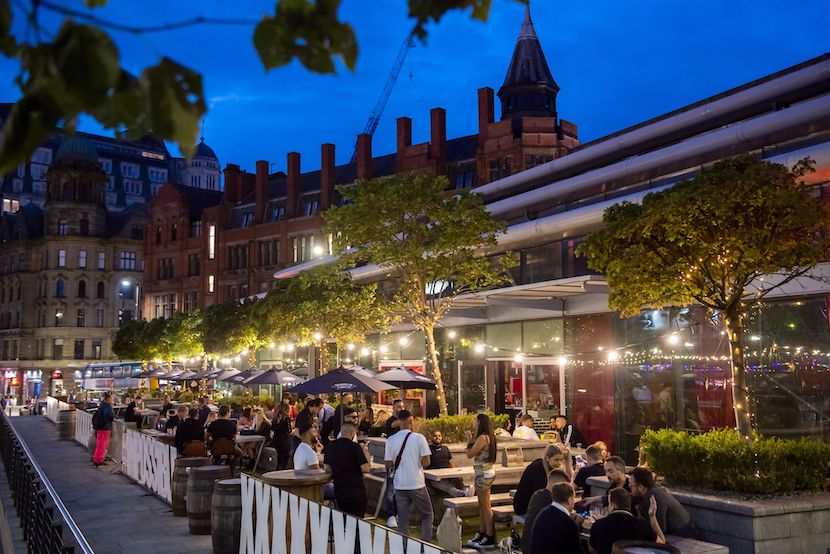 Around the world people willingly settled down for a few weeks of sheltering in place to flatten the curve of Covid-19 infections last March. The world seemed to fall into an eery silence. A year later livelihoods have been destroyed, deteriorating mental health is a global crisis and economies have ground to a halt. A yearning for life ‘Before Corona’ is undeniable for most. Simon Lincoln Reader looks back on a year of lockdown that tugged at the fabric of society and shifted power to people who he says are unfit to wield it. – Melani Nathan

I will never forget the sight of two grown men squaring up to each other over bottles of instant coffee in a supermarket on the eve of the UK’s first lockdown. Both appeared to be suffering from the same kind of neurological trauma – and blaming the other for it. The standard London skirmish involves shrieks and blades; these two shuffled and grunted around the aisle, trading c- and t-words. I arrived home that night to an uncomfortable Boris Johnson on TV whose morose expression, even before he said a word, confessed: ‘I regret to inform you, but I have just eaten a lasagne the size of Wembley Stadium.’

A year later and the results here, unlike documents used as the basis for illegitimate wars, cannot be sexed up. The majority in locked-down Britain is poorer, unhealthier, angrier, more depressed and less trusting of government. Mental health is a nuclear crisis; career prospects for both the young and poorest have diminished – possibly never to return in their lifetimes.

In terms of geopolitics, it’s just as much a cock-up.

To populate his cabinet, the manifestly senile leader of the free world raided 15 villages and snatched their idiots. His press secretary is easily the most annoying person on the planet – ever. Zuckerberg, Dorsey, Africa Check funder Pierre Omidyar and the rest of the woke billionaires are now recipients of power they are manifestly unfit to hold and do not deserve. Legacy media, apparently chuffed to have been exposed as Biden special ops PR, are going for broke on dishonesty and because pederasty was never going to be enough for Hollywood, they’re now handing out Emmy awards to Covid-19 genocidal amateur rapists. That paragon of human rights, the Chinese Communist Party, is the toast of the liberal Daily Moron reading world – and Chairman Xi toasts back to them too, before turning around to his committee and collapsing with laughter at the spinelessness of today’s confused Baizuo.

Freedom of speech isn’t quite history yet, but its breathing is laboured. The emerging censorious, neo-racists do not possess the faculty to understand that the sensible have nothing against supporting Joe Biden, or admiring Anthony Fauci if you’re into that kind of thing. It’s perfectly okay to have grown up in Britain, benefited from its welfare, then turn one day and despise it (because the tertiary curriculum now demands it). We have never attempted to silence or cancel the middle-class Extinction Rebellioners – or any other fashionable performative activism, despite their objectives to destroy the world.

There is however one position that is becoming increasingly difficult to accept and sustain. As we live now, knowing what we do and seeing what we have – there nothing is quite so cruel and misanthropic as the view of the lockdown enthusiast.

Unsurprisingly, the two most prominent advocates of lockdowns here also happen to be complete asshats. Neil O’Brien is the Conservative MP for Harborough – a dog-whistling, cyber-bully who I’ve written about before, and the other is the son of the actress Glenda Jackson called Dan Hodges, who writes for the Mail on Sunday. Hodges, in the great Glenn Greenwald’s wise and learned judgement, is ‘the worst commentator in the west’.

One politician, one journalist. Cribbing from notes initially compiled by the unlikeable climate scientist Michael Mann – who himself seized the Holocaust as a defence for his own fast ones – the use of the term ‘denier’ was quickly attached to anyone daring to scrutinise the merits of lockdown. Both attempted not just to further their careers and popularity via the pandemic, but the worst feature of it.

So, it was three weeks to flatten the curve but now here we are, holding onto our lifetime memories of a city built on the back of its theatres and restaurants streaming onto pavements and tattoo parlours and friendships – upon the ambition of young make-up artists and hairdressers, hoteliers, tailors – all seeking to find their place in the world through London. Whilst I have been more fortunate than many, I side firmly with the tour guides, the barmen, the musicians, the poets and the book store workers – all who were told they were something called ‘non-essential’.

Amongst the carnage, one revelation of lockdown emerges. The whole point of this thing – life – was to live amongst, not away from. If we are lucky, we must learn never to take this great force for granted ever again.