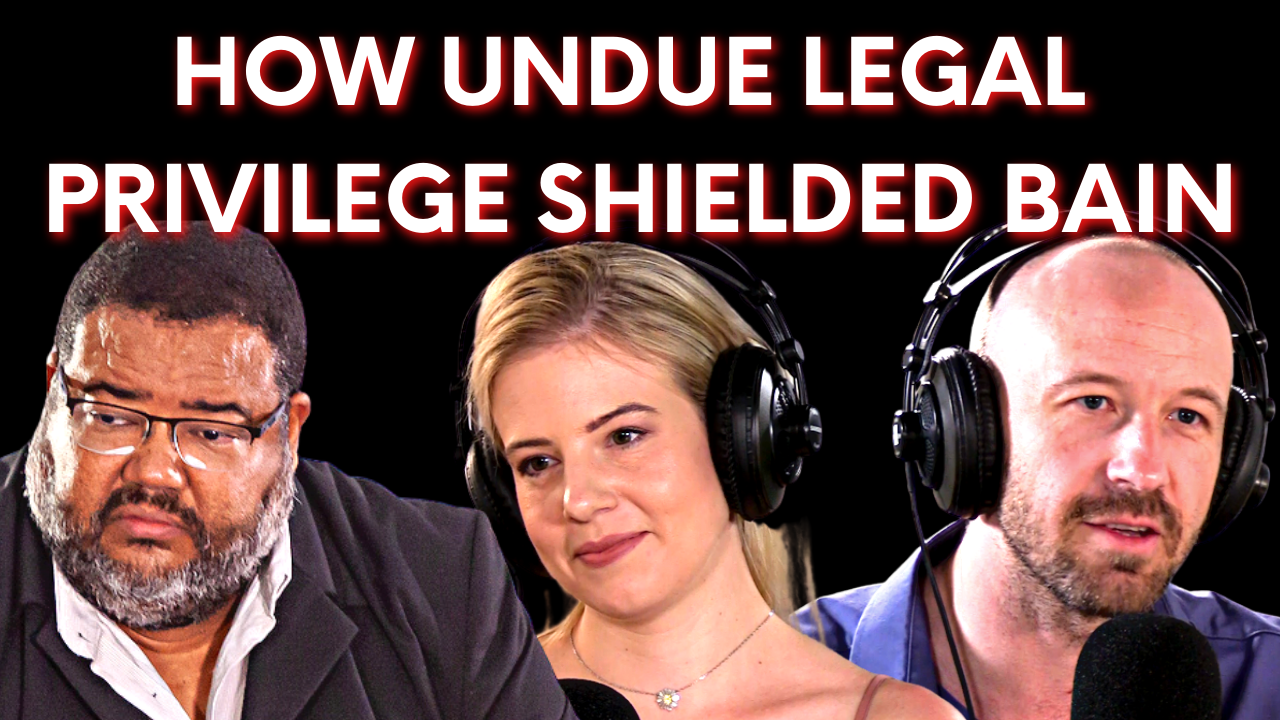 In this roundtable discussion with Adv. Erin Richards and Bain whistle-blower Athol Williams, the actions of Bain’s lawyers Baker McKenzie are in question. Did the global legal heavyweight justifiably shield its client from scrutiny, or criminal prosecution, by invoking legal privilege? All this while also being tasked with ‘independently’ and ‘transparently’ investigating Bain’s conduct at the South African Revenue Service? The report from Baker McKenzie’s investigation has never seen the light of day despite promises by Bain to the contrary and Williams’ best efforts. My guests discuss the limits of legal privilege arising from a scenario in which Baker McKenzie was alleged to be giving legal advice to Bain and investigating them at the same time. It’s a clear conflict of interest, but one that has been conveniently skipped over in the narrative Bain peddled. Take what Bain said in a 2018 statement versus what you will hear from Williams himself. Bain stated: “We hired global law firm Baker McKenzie to conduct a thorough, independent, forensic investigation. The work of Baker McKenzie identified almost 1,000 potentially relevant documents, which were immediately submitted, unfiltered, to the Commission. We also mandated Athol Williams, a respected academic, social advocate and Bain Alumnus, to provide his own opinion on the independence and adequacy of the investigation by Baker McKenzie.” The problem here is they refused to let Williams see that report and they also never made it public. One cannot be a player and a referee at the same time … at least not if you want any semblance of credibility to accompany such a public commitment that all the ills have been remedied. – Michael Appel

Legal privilege protects from disclosure any documents between attorney and client that are produced either for the purpose of seeking legal advice or for preparing for contemplated litigation. Bain asked a law firm, Baker McKenzie, to do an external investigation of what had happened during its time at SARS between 2014 and 2015. As I understand it from Athol Williams’ testimony, that investigation was supposed to be open and transparent, and it was supposed to be overseen by Athol in the best interests of South Africa. What happened is that legal privilege was one of the reasons invoked that prevented full transparency during that negotiation process.

Richards on the conflict between representing Bain and also investigating them

Baker McKenzie was advising Bain and preparing them for their appearances at the Nugent Commission. They were then simultaneously contracted to do this supposed transparent, external, independent investigation. Now let’s just look at how privilege can operate nefariously here. When Baker McKenzie was helping Bain prepare for the Commission, any documents that came to light during that process of preparation would legitimately be privileged from disclosure. But the problem then comes in when some of those documents are also relevant to the supposedly transparent and independent investigation. Do you stick to privilege? You’re going to have to, unless the client waives it. It’s only a client that can waive privilege because the privilege attaches to the client. But, the independence and the transparency of the investigation is then compromised.

Richards on Baker McKenzie being both player and referee

Had it been different people working within Baker McKenzie on different facets, they could have erected a Chinese wall. I see that done often and very successfully in law firms where different teams do work for the same client. There is no conflict because of that Chinese wall. But even if – on the best interpretation – Baker McKenzie was somehow able to maintain the independence of the investigation, the fact is they must have known from the start the transparency of the investigation would be compromised because there were certain privileged documents that would not be disclosed to Athol. Even if the independence was maintained, the transparency was compromised. So, here we get into this very fraught legal, ethical debate about what comes first. Your duty to your client as a lawyer? Or do you also have a higher duty to the Constitution, to the value of transparency or good governance?

Williams on whether Baker McKenzie’s report was ever made public

It didn’t go to the Nugent Commission on the advice of Baker McKenzie. It was Baker McKenzie that advised Bain not to submit a report to the Commission. I put it to you, that’s not the actions of an independent investigator. I was frustrated during this process. They were manipulating me. They were trying to hoodwink me and I kept catching them out. It was explicit in my contract that I would see their findings at the same time as Bain. Two months into my contract, Baker McKenzie said they were not producing a report, which I found very odd. How do you conduct an investigation and not produce a report? Then they came back to me to say there will be a report, but I cannot see it. This was most nonsensical. Again, they came back to me and said they will read the report to me on the phone, but I must claim that I’ve seen it.

It seems patently clear that it’s exactly what this was: a charade. And the question becomes: did Baker McKenzie know it was a charade? And if they did, what were their ethical duties? My argument would be that if they did know, they should have refused that brief to do the investigation. The one very alarming thing that appears from Athol’s transcripts is this idea of the report being used for prosecution [against Bain]. I remember reading that Athol raised this as an issue and asked why he was not seeing this report. Why was it not being disclosed? The answer that came back was that it might open up Bain to prosecution. Well, then that is surely more justification for its release, not less justification, especially if it’s not privileged.

Williams on shining a spotlight on law firms

Bring law firms into our purview in thinking about the players involved in state capture. In this case, with Bain and Baker McKenzie, Baker McKenzie was intimately involved in the cover up, which to me is an action of frustrating justice in our country, not advancing it. It is also interesting that Baker McKenzie had given organisations like Business Leadership South Africa an assurance that the investigation was transparent and independent. This has real impact in what is happening in our country right now with Bain. Should they be operating or not? They continued this narrative that the investigation was independent and transparent when the facts showed the opposite.