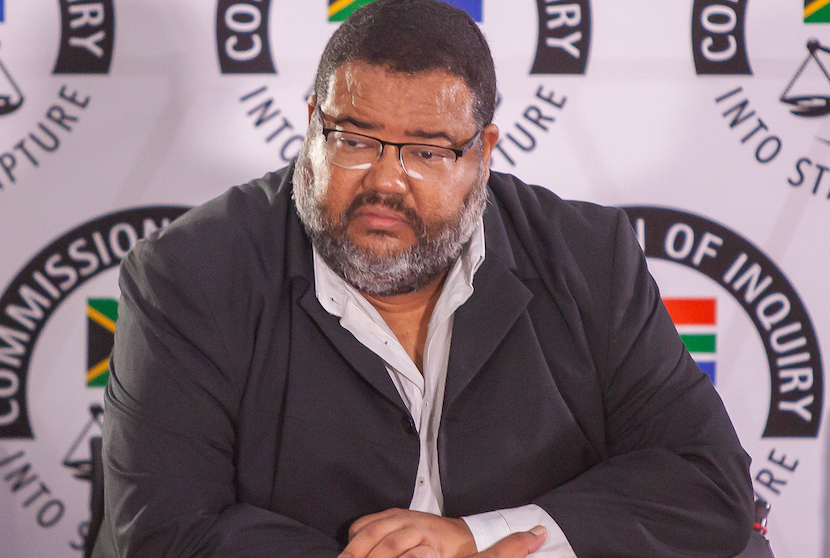 Whistle-blower Athol Williams is a man whose evidence at the State Capture Inquiry was able to “put Jacob Zuma in the room” where SARS’ downfall was plotted. Williams was a partner at Bain & Co. The global consultancy firm has sought to relegate its role in the strategic destruction of our tax collector to one of an “unwitting participant”. A cursory glance at the reams of evidence – and subsequent findings in Zondo’s report – render Bain’s mea culpa not only hollow, but so far removed from the rubble it, Jacob Zuma and Tom Moyane left behind. At a time when this country needs skilled people of integrity more than ever, because of our government’s “explicit intention to leave whistleblowers exposed and abandoned”, Williams remains in self-imposed exile until his safety can be guaranteed. – Michael Appel

There’s been lots of speculation about why the state capturers would want to go after SARS. Was it to loot SARS directly? Was it part of their strategy to get hold of Treasury? Was it to disable particular law enforcement capabilities within SARS so that tax dodgers could keep dodging tax? I think it’s a combination of all those reasons.

If you are going to go and do this profound strategy refresh of any organisation, it means it’s a complete do over. It means the organisation is dysfunctional. Nothing is working and no amount of tweaking is going to solve the problem. That is exactly what Bain and Moyane intended. There’s no right-minded person in the world who would say SARS was dysfunctional. It was one of the top five tax collection agencies in the world. Bain’s argument is they found problems at SARS and had to restructure. That is just a despicable explanation.

Ambrobrite is not an operating company and never was an operating company. It was something bought off the shelf on the day it was needed and supposedly run by two artists. These two artists were supposedly offering strategy advice to one of the world’s pre-eminent strategy consulting firms on how to do business development in South Africa. It’s preposterous. This wasn’t a South African issue with Bain, at its global head office; they knew the reason for engaging with Ambrobrite was because of his proximity to Jacob Zuma.

Regarding Bain’s 17 meetings with Zuma over two years

Bain’s claims these were marketing meetings, which just shows the way they consistently insult South Africans’ intelligence. It’s astounding that they’re trying to discredit the Zondo Commission. They’ve discredited the Nugent Commission. They’re trying to discredit me. It’s never about them. It is highly problematic that any business consultant is meeting with the president. You’ve got an American company headed by an Italian meeting with our president to discuss the ANC’s manifesto, to discuss how parliament is run, to discuss reshaping and repurposing our institutions. That’s highly problematic.

Bain as co-conspirators with Zuma

With the evidence I was able to present to the commission, for the first time, we could put Jacob Zuma in the room. It’s important to recognise that Bain should not be lumped with all the other companies involved in state capture. Bain sits apart because they were Jacob Zuma’s consultant of choice. They sat with him at the highest table planning state capture.

Business Leadership South Africa’s readmission of Bain as a member

It’s absolutely astounding. It shows this profound ethical poverty among the board members of Business Leadership South Africa. For these 12 people, who are CEOs of some of the biggest companies in our country, to sit around the table knowing everything we know about what Bain has done at SARS, and conclude that this is a company worthy of being inside their organisation should be worrying.

What has to happen now?

We need to see law enforcement and our criminal justice system do what it’s meant to do, which is to prosecute these people and put them behind bars. What they have done is just despicable. It’s affected our country in ways we cannot even calculate or comprehend the impact it’s had on lives, careers, and on the country as a whole. I think we need to ask whether state capture is something of the past. I don’t think it is. It is continuing to happen in real time.

The cost of whistle-blowing

The reality is my life has been ruined. My career has been ruined. I haven’t had an income for two and a half years. I’ve ripped my family out of their home and we’ve come to a foreign place where we have no permanent legal status. I am sad for our country. I’m sad for the fight against injustice, but I will keep on with my fight.

How many lies can you find? https://t.co/YnJLETL2ey

In a statement released earlier this week, Bain said it is supportive of the Zondo Commission and its work, “as well as its important role in helping to end the damaging effects of corruption in South Africa”. The firm, however, takes umbrage with how the report “mischaracterises Bain’s role at SARS”.