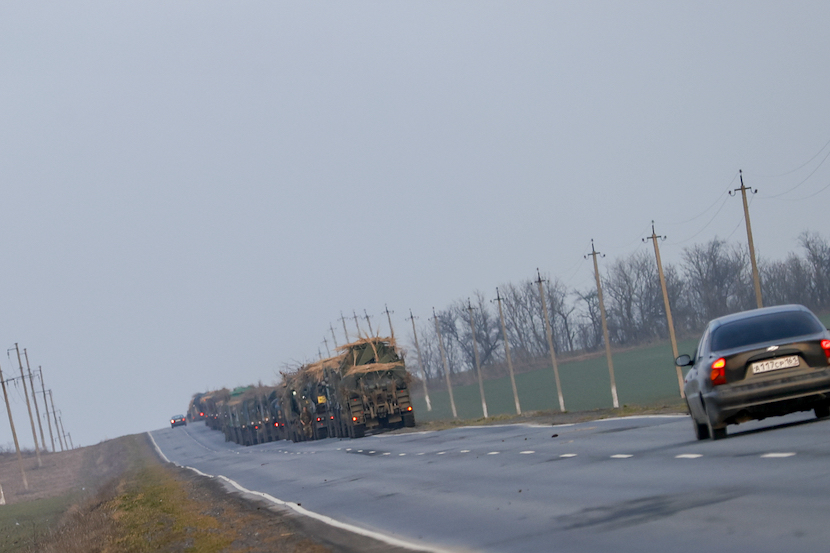 Russian troops and tanks pushed into Ukraine and airstrikes hit the country’s capital and more than a dozen other cities early Thursday after President Vladimir Putin said he ordered a military operation to “demilitarize and de-Nazify Ukraine” and bring its leaders to trial.

Ukrainian officials said an initial wave of strikes targeted military installations, airfields and government facilities across the country, as well as border-force installations. Ukraine’s border service said its troops came under attack all along the country’s frontiers with Russia and Belarus.

Video posted online by the border service showed columns of Russian tanks and armored personnel carriers moving into southern Ukraine, while in Kharkiv, eastern Ukraine’s largest city, residents said a large fire was visible after what appeared to be a hit at a weapons depot.

Heavy shelling targeted the city of Mariupol on the Azov sea. Air-raid sirens sounded in Kyiv after 7 a.m. and the city’s airport came under attack. Ukraine’s military said it shot down five Russian warplanes and one helicopter. Russia denied any of its aircraft were hit.

In a televised early-morning address, Ukraine’s president, Volodymyr Zelensky, called on citizens to remain calm. “We are working, our army is working,” he said. “Don’t panic, we are strong, we are ready for anything, we will overcome.”

Mr. Zelensky said he had ordered the introduction of martial law across Ukraine and had spoken with President Biden about the attack.

Ukraine’s defense minister, Oleksii Reznikov, said the government was arming citizens who had joined territorial defense forces in their hometowns. “Ukraine is entering a state of total defense,” he said in a message on social media. “Death to Russian occupiers!”

Kyiv didn’t immediately offer any official estimate of casualties. But a senior Ukrainian official said he believed hundreds of Ukrainian soldiers had died in Russian airstrikes and missile attacks that began at 5 a.m. local time.

Mr. Biden called Mr. Putin’s move an unprovoked, unjustified attack in Ukraine, pledging further action against Russia. “President Putin has chosen a premeditated war that will bring a catastrophic loss of life and human suffering,” he said in a statement.

Britain’s prime minister, Boris Johnson, tweeted that “President Putin has chosen a path of bloodshed and destruction” and said the U.K. and its allies would “respond decisively.”

The European Union announced sanctions hitting Russia’s financial sector, freezing assets and banning the export of technology to the country. The president of the bloc’s executive arm, Ursula von der Leyen, said the sanctions would hit “strategic sectors of the Russian economy” and “weaken Russia’s base and its capacity to modernize.”

The attack was Mr. Putin’s most aggressive action yet as he seeks to redress what he views as Russian losses since the collapse of the Soviet Union, the end of the Cold War and the expansion of the North Atlantic Treaty Organization and the European Union toward Russia’s borders.

Moscow’s moves presented the U.S. and its allies with a test of their unity over how to respond to Mr. Putin’s challenge to the global balance of power. The U.S. has promised harsh economic sanctions, but Mr. Putin has leverage, too: Russia is a major supplier of energy to Europe.

Just before the airstrikes began, Russian television aired a speech by Mr. Putin in which he said, “Circumstances require us to take decisive and immediate action” to remove Ukraine’s leaders, whom he accused of “committing numerous bloody crimes.”

The Russian leader railed against the eastward expansion of NATO in the decades since the 1991 collapse, saying Moscow had been faced with “deceit and attempts at pressure and blackmail.” And he issued a pointed warning against any attempt to stop Russia’s move into Ukraine, saying Russia was “one of the most powerful nuclear powers in the world.”

Mr. Putin justified his actions by saying he was answering appeals for help from leaders of two Russian-controlled breakaway regions of Donetsk and Luhansk, which he recognized as independent this week.

Mr. Putin said that his plans didn’t include the occupation of Ukraine, military activity all along Ukraine’s borders suggested otherwise. He called on Ukrainian soldiers to lay down their weapons and go home.

As Mr. Putin announced the invasion of Ukraine, the United Nations Security Council met to discuss the crisis, with diplomats agreeing to vote on a resolution against Russia on Thursday, but Moscow was unlikely to face any consequences because it holds a veto as a permanent member of the council.

The calls for a U.N. resolution came at an emergency late-night council meeting that started with calls for restraint and peace—but shifted after Russia’s ambassador to the U.N., Vasily Nebenzya, read from Mr. Putin’s statement about the commencement of military operations in Ukraine.

Ukraine’s ambassador to the U.N., Sergiy Kyslytsya, called on Mr. Nebenzya to assure the council there wouldn’t be a widespread war across Ukraine.

“The Russian Federation ought to relinquish responsibilities of the president of the Security Council, pass these responsibilities on to a legitimate member,” Mr. Kyslytsya said. “There is no purgatory for war criminals—they go straight to hell, ambassador.”

Hours earlier, Mr. Zelensky, the Ukrainian leader, made a Russian-language appeal to Russian citizens, saying his nation posed no threat to Russia and that responsibility for unleashing a conflict that could cause tens of thousands of deaths would lay squarely with Mr. Putin.

Mr. Zelensky, who is of Jewish origin, ridiculed Russian propaganda assertions that Ukraine was somehow beholden to neo-Nazis, pointing out that eight million Ukrainians died during World War II and that his own grandfather was a decorated Soviet officer at the time.

“They say that we are Nazis. But how can a people who sacrificed more than eight million people for the victory over Nazism be Nazi? How can I be a Nazi?” he said. “Tell that to my grandfather who spent the whole war in the Soviet army and died as a colonel in a free Ukraine.”

n the streets in Kyiv on Thursday morning, there were no obvious signs of panic, despite the wail of air-raid sirens and the thud of distant explosions. Some residents strolled while others were walking hurriedly with bags and rucksacks in the predawn darkness.

Lines of automobiles formed at gas stations along a boulevard leading westward out of Kyiv in the direction of Lviv, a city near the Polish border. Outside the Russian Embassy, Ukrainian police guarding the property said personnel had been leaving gradually and that the last of them departed in several cars at about 8 p.m. Wednesday night.

A flower and coffee shop next to the embassy opened on schedule at 7 a.m. “We expect this day to be like every other—people don’t cancel birthdays or funerals,” said Anya, 24, who opened the store. She declined to give her last name. “And flowers always lift the mood.” She said she awoke before dark to open the store after the attack had started and took a bus to work with other sleepy commuters.

Ukrainian airspace was closed to all civilian aircraft, according to Eurocontrol, which manages European air traffic. A formal notice to pilots and operators has been sent warning of the “potential hazard for civil aviation.”

Ukrainian lawmakers passed emergency legislation on Wednesday to allow Kyiv to prepare for a Russian attack, with Mr. Zelensky’s political rivals putting their grievances aside and closing ranks in the name of defending Ukraine’s independence.

“Ukraine above all. As long as the risk of invasion remains, we are taking a moratorium on anything that undermines national unity,” former President Petro Poroshenko, Mr. Zelensky’s main rival, said in an interview. “The Ukrainian people are showing unity, the Ukrainian society is showing unity, Ukraine’s responsible statesmen are demonstrating unity.”

Mr. Zelensky had held off on mobilizing troops and other overt preparations for weeks, fearing that a panic would torpedo Ukraine’s already-battered economy. He changed his approach after Mr. Putin recognized the independence of the two Russian-backed statelets in eastern Ukraine’s Donbas region and made a grievance-laden speech that questioned Ukraine’s right to exist as a sovereign nation.

China responded to the Russian attack on Ukraine by calling on all parties to exercise restraint and prevent the situation from getting out of control.

“We still hope that parties concerned will not shut the door to peace and engage instead in dialogue and consultation and prevent the situation from further escalation,” Chinese Foreign Ministry spokeswoman Hua Chunying said Thursday during a regular press briefing in Beijing.

In Washington, U.S. lawmakers from both parties quickly called for increasing sanctions and boosting NATO defenses in response to Russia’s military action in Ukraine.

Sen. Mark Warner (D., Va.), the chairman of the Senate Intelligence Committee, said Mr. Putin had brought decades of general peace to an end with his illegal invasion. Mr. Warner said it was time to ramp up “the pain level” of sanctions and bolster NATO allies’ defenses.

“While there is still an opportunity for Russia to reverse course, we can no longer hold out hope that this standoff will be resolved peacefully,” Mr. Warner said. “Therefore, we must all, on both sides of the aisle and both sides of the Atlantic, work together to demonstrate to Putin that this aggression will not be allowed to go unpunished.”

Sen. Kevin Cramer (R., N.D.), a member of the Senate Armed Services Committee, said sanctions were needed months ago to ward off an invasion, but now, “we must implement strong, primary and secondary sanctions immediately.”