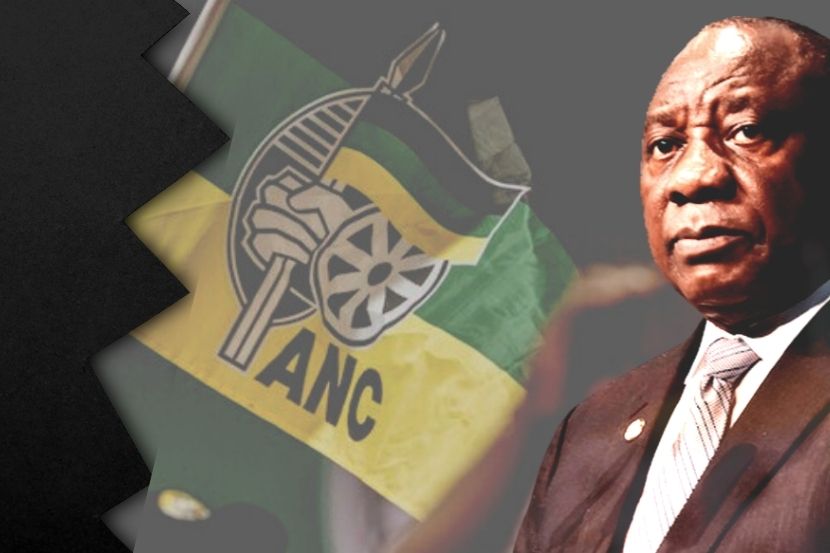 Soon after Russia’s invasion of Ukraine, the South African Government called on Russia to immediately withdraw its forces from Ukraine. It issued a statement on 24 February that said: “Armed conflict will no doubt result in human suffering and destruction, the effects of which will not only affect Ukraine, but also reverberate across the world. No country is immune to the effects of this conflict. As the UN Secretary-General has indicated, the conflict will have a huge impact on the global economy in a moment when we are emerging from the Covid-19 pandemic and so many developing countries need to have space for the recovery.”

This would suggest South Africa’s view is that this armed conflict, like all others, will result in unnecessary human suffering and destruction with global aftermath. Yet, when the rare special emergency session of the UN General Assembly was called, South Africa – alongside 35 other countries – abstained from a vote to condemn Russia’s aggression against Ukraine. As a nation birthed through negotiation, South Africa’s stance sparked widespread debate locally about its merits and whom it sides with in the world order.

BizNews spoke to SA-based Ukrainian, Dzvinka Kachur who shares the backstory to the deeply unsettling stance by the South African Government. She reveals a mountain of circumstantial evidence that suggests SA President Cyril Ramaphosa struck a secret deal with Putin. Kachur told BizNews’ Alec Hogg, “When we hear President Ramaphosa say South Africa takes a position of neutrality, yet, it goes against over 20 years of South African experience in public diplomacy, it leaves us with the question of why South Africa suddenly is not following its Constitution that is very strong on human rights and freedom on sovereignty. It takes a stand of neutrality while at the same time mentioning that war could have been avoided if nature would hear its own leaders.” As a result, South Africa is creating a heightened PR disaster locally and internationally for its reluctance to criticize Russia. While on the other hand, there is obviously more to the government’s position than this.

We took to social media to see how BizNews community members feel about South Africa’s egg dance in the escalating war.

Commenting on YouTube, Ella Tupin says, “Thank you for this insightful conversation and the sensitive questions posed. Thank you too for voicing that this neutral stance towards this horrific war is way not the opinion of most South Africans. We stand for your sovereignty, admire your strength and wish your country long-lasting courage and resilience.”

Santie Crowther agrees. “Negative attitudes towards Ukrainians will definitely not be from the citizens of SA, it might/will be the ANC itself. It’s a pity to hear that we are not allowed to help any of the Ukrainian people.”

Christine Finniss says, “The ANC elite are in the same camp as the Russian oligarchs.”

“Ramaphosa is in neutral gear all the time. His brakes have failed. His engine stopped running. His bakkie is overloaded with all the cash and running downhill fast. He is going to hit the pothole and all that cash is going to splash in his face,” writes Heinrich Becker.

However, BizNews community member David Lipschitz, feels the South African Government made a wise decision to abstain from a vote on the resolution to condemn Russia for the invasion of Ukraine:

“At 8 minutes 30 seconds, Ms Kachur asks a valid question: what is so important that would cause South Africa to vote as it did? My answer: food security. Look at the food and other imports from Russia to South Africa. And exports (we need forex). I’m not saying what’s right or what’s wrong. I’m asking if it makes strategic sense for a government far away from the theatre of war to put its food security on hold and potentially starve millions of people in exchange for denouncing this invasion (more South Africans could die from this decision than will die in the Ukrainian war)? The same goes for the UK potentially sending warplanes to Ukraine. The UK is already short of fighters. If it sends its home-based fighters to Ukraine, it will be seen as a declaration of war and Russia could attack the UK. So, we need to constantly look at geopolitics and grand strategy.

Many countries have imported oil from Saudi Arabia (no women’s rights; no democracy; cutting off peoples’ hands if they steal something), Iran, Iraq, and other countries, which even support terrorism. Countries turn a blind eye to atrocities in other countries in order to keep their own countries stable. Why suddenly stop importing from Russia in this event?

I’m not saying it’s right or wrong. South Africa abstained from the vote. This is the wisest decision that our government has made in decades.

I also want to know why Ukraine ignored strategic advice from as far back as 1994 and then 2014 and 2015 to not be involved with NATO? And in February I believe the last straw for Putin, who had been asking for negotiation with Ukraine and NATO for over a decade, was when a container of javelin anti-tank missiles was delivered from the USA to Ukraine. If you push someone into a corner, you must expect them to eventually react.

I have a friend from Kyiv. This after a discussion with her. We also need to look at how the Ukrainian Government for decades has treated their Russian citizens in their eastern provinces and why Russia has had to send truckloads of medical, food and other supplies into those provinces during that time? Ukraine will say Russia was arming those provinces. But Russians on the ground in those provinces will say the hatred of Ukrainians for those Easterners is part of the reason Putin intervened with food and medical supplies. The invasion is to do with NATO.

There is lots going on. BizNews must report all sides, just as it has done for the past two years with the Covid-19 debate.”

IMHO, NATO must immediately withdraw to Ukraine’s western border. Russia at the same time must immediately withdraw to the Russian provinces of Ukraine who want to be with Russia. Ukraine must seek disarmament. Negotiations must take place in the highest echelons of power of what should happen to the eastern (Russian speaking) provinces of Ukraine. If Ukraine is prepared to consider those people as its own and not keep harming them, then great. If not, an alternative must be sought. Why is it okay for the United States Empire in the body of NATO to march east, but it’s not okay for Putin to march west? Just asking.” 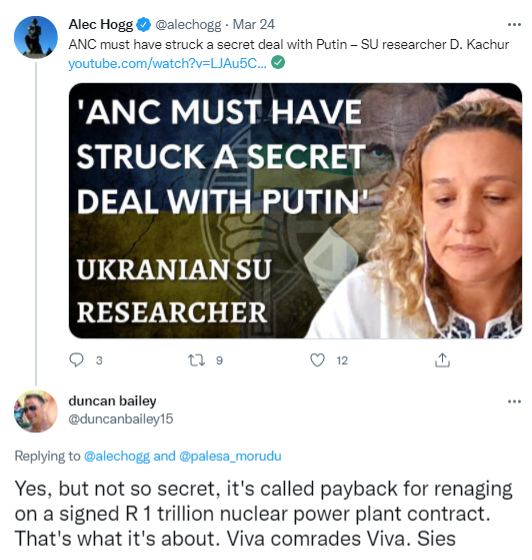 Alex responds, “Very well put. There are at least two sides and the current binary narrative of ‘Ukraine good, Russia bad’ is pure propaganda. However, it is important to note that understanding an action does not mean condoning it.”

“Very good questions. I believe Ramaphosa has seen the possibility that US is in decline. China is rising and he seems to be choosing East over West for the long game. India, the Middle East, many South American countries and much of Africa are pivoting East. They are disengaging with a USA that operates by bullying, financial capture through WB and IMF, and sanctions and are now looking east. Fuel and grain are going to become scarce commodities; fertilizer has been hard to get for over a year, this means a huge reduction in yields is projected. Ukraine may not have a harvest at all this year and everywhere else is predicting massive cuts in yield, so we need to secure grain for the future and affordable fuel to power our recovery. I believe Russia has offered us both, on a silver platter with bells on. US on the other hand is not offering anything, other than threats,” says Claire El-Jabi Verdonk.

Ravi Moodley replies, “So, according to your views, in times of personal/South African potential crisis relating to food security, it’s okay to discard the spirit of ubuntu and justice. USA is the bully, yet Third World countries’ first choice for immigration is USA. In times of poverty, famine and other disasters, which country or group of countries contribute the most in aid. Russia, China, Cuba, North Korea, Asian continent? Our president and the ANC are hypocrites for the stance they are taking. They are economical with the truth, always mentioning of past help ‘Russia’ gave to ANC to defeat apartheid while the West did nothing. It was the USSR, of which Ukraine was a key part that helped overcome apartheid, not Russia alone! Do you see the destruction on TV, is that a Hollywood movie meant to deceive us that there’s a war going on in Ukraine? How can any decent human being make excuses for that and continue to remain ‘neutral’?”

Cape Orb Observer adds, “While the situation in Ukraine is terrible and it is unfortunate that Ms Kachur’s family has to endure such conditions, opposing Russia is far from an obvious rational decision for South Africa. Emerging evidence suggests the West has neither the upper hand nor the moral high ground on this issue.”

Scholtz Maritz feels there are good reasons for South Africa to support Russia:

“In my humble opinion, the ANC government has done, and is still doing, many very stupid things, but one intelligent thing they did and keep doing is siding with Putin, who is acting in nation-defence. Even Zuma, who ordinarily makes stupid statements, made an intelligent statement, when he called Putin a man of peace.”

While Cyril Ramaphosa has made no mention of Pretoria’s affinity for Moscow, other government leaders, like Lindiwe Zulu have said that Russia is a “good friend” deserving of South Africa’s support.

Are there good grounds for South Africa to keep Russia sweet? Add your voice to the discussion below.