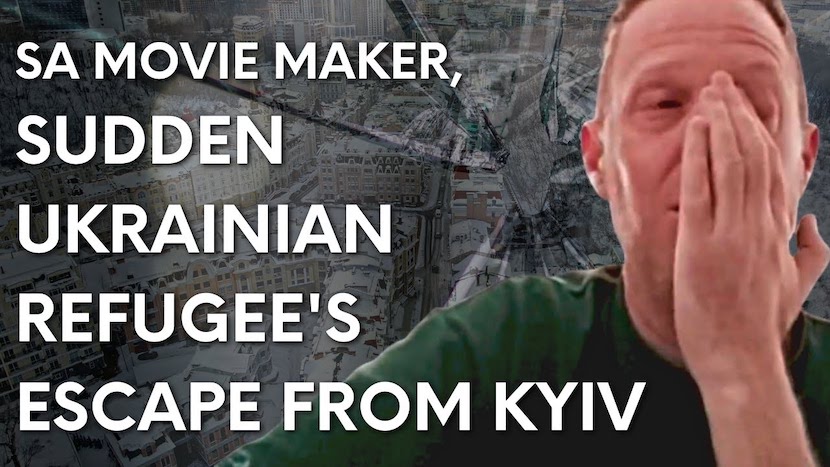 Over the past 14 years, Ronnie Apteker has forged deep roots in Ukraine, spending the last eight of them living in its historic capital city, the now embattled Kyiv. Two days after the Russian invasion of the country, Apteker, his wife and baby undertook a nightmare journey to get away from the war zone. Six weeks later, the co-founder of SA’s dominant internet service provider, fresh from his first decent night’s sleep since the trauma began, shares his harrowing story with BizNews editor Alec Hogg.

Ronnie Apteker on the journey of getting out of Kyiv

I will never forget the details. Four days of not sleeping in a car. We even had strangers look after us one night in the middle of nowhere. We slept on their couches because the journey out of Kyiv was just scary. We were on this highway. It has four lanes in each direction but on the incoming lane, there were no rules, everyone just drove [causing] lots of accidents. Petrol stations with queues around the block. On the two incoming lanes, there were tanks and military vehicles and everyone was hooting in support of the Ukrainians. But it hadn’t hit yet. We hadn’t yet seen Mariupol flattened and Kharkiv destroyed. Kharkiv was one of the pride and joys of Ukraine, the old capital from the Soviet days. A very beautiful city, unfortunately, close to the Russian border. Kyiv is a good 600 km from the Russian border. We got on the road at 10 o’clock that Friday. At 9 o’clock we were ready to go and we actually cleaned the apartment for an hour. We put all the laundry away and threw out the rubbish. I took nothing because I couldn’t understand what was going on. I took my laptop, phone and credit card. We took a lot of food and nappies. At 10 o’clock we got in the car, the roads seemed calm and then 15 minutes later we were on the highway. I have never seen so many cars, and it took us about three hours to drive the first 50 km. You couldn’t see the cause because every car was packed with luggage. You knew something was bad because there was no sound. There were jets and helicopters and bomb blasts and the cars would shake, which is very freaky. I was sweating, in winter in a T-shirt, I couldn’t stop perspiring. It was just pure fear.

We eventually got out of the city limits by the time it was dark and on our way to my wife’s grandfather’s farm just outside of Lviv. My friends in Lviv said nothing has come into the city. On our way to the farm, there were potholes everywhere.  Every metre there was one, so we were moving slowly on country roads. By the time we got to the family farm, we just collapsed on a couch. The next day the tensions and anxiety rose and we thought about getting out of Ukraine. The first thought was to go to Austria and that plan kind of changed. Eventually, we decided we were going to come to SA. It is quite ironic that I came to SA to be safe because as much as we love SA, it does have an element of danger.

On moving to Ukraine

The pandemic shaped a bit of that because, in the last two years, you couldn’t really come back. And we had a baby. For the last two years, the whole world kind of conformed because of the lockdown. We bought that apartment about five years ago, and I was spending about half the year there and the other half here. Before that, up until five years ago, I was spending every month out of three there. We did some work there and life was peaceful. There was no crime. Ukraine is naturally a beautiful country. I don’t think anything will ever beat the kind of magnificence of Cape Town and the mountains but Ukraine has its own beaches and mountains, its own alps and midlands. I just found a place that worked for me, and that was just dumb luck. I met a Ukrainian guy there called Michael. He became one of my closest friends and we share a lot of business interests. We just fell in love with the place.

On what lies behind Russia’s thinking

Ukrainians believe they will win. They know what they are fighting for. If you stop a Russian soldier and ask what they are fighting for, they don’t have a clue. They were told it was a special military exercise. The Ukrainians know they have a purpose. The Russians have some vengeance. I am convinced Putin’s entire aim is to create chaos in the world because it makes Russia look good. Putin did not want a free press, a functioning democracy on his doorstep because it could inspire his citizens to have a revolution. So, the fact that Ukraine was becoming more Western, embracing Western values, economics, democracy and free media really freaked out Putin. Russia is the ex-boyfriend that cannot let go. They can’t handle the fact that the girlfriend has moved on and is doing well.