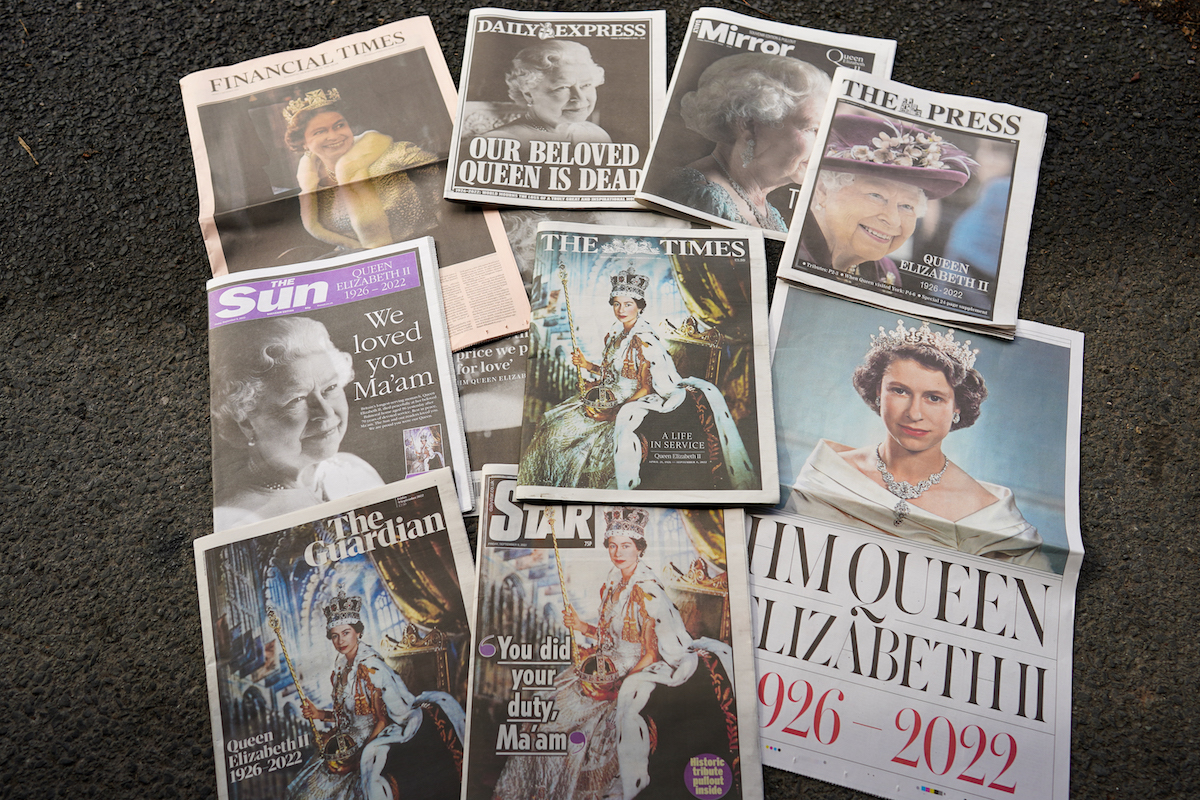 In a cynical age of relative morality and celebrity culture, Queen Elizabeth II’s life was one founded on responsibility to her country and the British people. On her 21st birthday in 1947, Princess Elizabeth went on the radio and made a promise to Britain and its Commonwealth nations: She pledged that “my whole life, whether it be short or long, will be devoted to your service” – and she went on to do exactly that. She stayed above the messy maelstrom of direct politics, and lived through such tumultuous times as the horrors of World War II while a teenager, as an aged monarch the agonies of the Coronavirus pandemic. This tribute from Simon Reader sums up how many people, both British subjects and others around the world, feel about her. – Sandra Laurence

Yesterday I walked past Buckingham Palace en route to a restaurant on Pimlico Road; on my way back, vehicles belonging to news channels had already started congregating. Back at my office in St James, the wife of a colleague who works as an international correspondent for a television network arrived with her hands over her mouth, two hours before the official announcement.

As it happened my wife and I visited Windsor Castle on Sunday. We can’t think of any specific reason, outside of our mutual and enduring love of the woman, why, and why then. Looking down from the northern terrace at the canopy of trees, I was struck again with that feeling of intrigue I first encountered as a 17-year-old visitor in 1996 – the sight of the uniquely peaceful, deep English summer green. In the distance, a cricket match was being played.

Neither my wife nor I are English. We’ve never met any royalty, but a friend was close to the late Duke of Edinburgh –  or as close as a commoner and a royal can be – as the chair of a charity of which the late Duke was patron. And his insights are profound, especially his claim that so much human interaction had given the Queen an extraordinary ability to read situations. As if on prompt, one such example aired last night: a well-known and popular former MP explained how the Queen reacted when she arrived to meet her wearing a moon boot. “I’ve broken my foot,” the MP explained to the Queen. “Oh,” the Queen replied, “how tiresome.” Beyond sympathy, perfect choice of word captured the real mood. The Duke was an exceptionally gifted man: having served with distinction in the navy, he was ahead of his time and perpetually curious: one of my many, many favourites of his many, many life masterstrokes was to plant vines in an unused area of Windsor Castle – the end result being sparkling wine good enough to serve to visiting dignitaries.

I expect there to be emphasis on the lives of the women who struggled in the Queen’s shadow, like Diana, Princess of Wales, or Sarah, Duchess of York, or who used the struggle of the shadow to amplify their own profile, like Meghan, Duchess of Sussex. But little will be placed on the women who succeeded. There is Katharine, Duchess of Kent, who comforted the late Jana Novotna after her loss in the 1993 Wimbledon finals (she would later teach primary school children music in Hull for 13 years. Nobody outside of the head knew who she was). And as if to answer the desire for consistency, Catherine, now Duchess of Cornwall and Cambridge, has been a revelation. The effect of the Queen on both women is undeniable.

Unfortunately, extreme ugliness will emerge in the next ten days of mourning. We’re already hearing squeals from extensions of the fake idol of progressiveness, in particular, the cults of “climate emergency” and “anti-racism”. These have appeared in magazines and newspapers that, at some point during the Queen’s youth, possibly sought to inform (but who can be certain?) Now, the New York Times and the Atlantic and others are just contemporary Americana ragebait trash, filled with inaccuracies and incoherent grievances. Sadly we’ll probably have to entertain Joe Biden for the funeral – but hopefully not his customised diversity hire propagandist.

Concern for the monarchy’s survival is also unmistakable; King Charles III, until yesterday the Prince of Wales, sometimes masquerades as a poorly disguised climate activist who has previously backed population control. “Charles” is also an unlucky name for British Kings – the only small reassurance here is that the Queen Consort, Camilla, another outsider who thrived under Elizabeth II, will likely encourage him to follow his mother’s example by extracting himself from today’s ideological brinkmanship.

The foundation of the Queen’s life was her faith, the thread that links. It was not entirely symmetrical, but foundation enabled duty, and duty enabled hope. This is the great difference between our meditation and that of the fake idols: one is filled with anticipation and hope, the other with hopelessness, OnlyFans, self-flagellation and McPlant chicken nuggets. Unlike the coward Justin Welby, who closed the Churches during coof before submitting to the “anti-racism” fraud, the Queen channelled an age where cathedrals and monuments were built as an expression of man’s love and respect for his God. Such faith, together with devotion, is rewarded accordingly: today, the Afrikaner, Zulu and Xhosa nations, alongside the French, speak of her with a contained admiration. On the rare occasions the Queen alluded to her deeply personal relationship with God, it was clear that the great mystery was electrifying to her: “He is nowhere, but everything”.

As I write London taxi drivers line Pall Mall to pay their respects. Some cry during interviews with reporters. Members of the 4th Regiment Royal Artillery have fired a 96-gun salute in Hyde Park. The third and final test between England and South Africa has been suspended. Later today, I will walk past 145 Piccadilly, home for many years to King George VI’s family, now the Intercontinental Hotel. The remarkable, brilliant, beautiful Queen Elizabeth II is gone, reunited with her beloved Philip, in God’s Kingdom.

Simon Lincoln Reader works and lives in London. You can follow him on Substack.