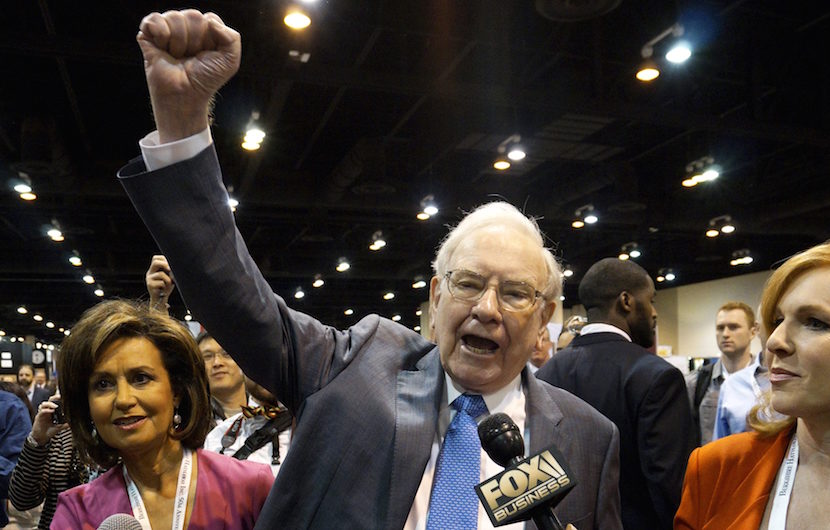 Warren Buffett has dropped his $60bn cash hoard by more than half by swooping onto an aerospace company, Precision Castparts. Buffett hates issuing Berkshire equity, so is funding the transaction through $23bn in cash and a further $10bn in borrowings. This will add a seventh company to the Berkshire conglomerate’s Big Six wholly owned subsidiaries – Berkshire Energy (formerly MidAmerican), BNSF Railroad; Lubrizol, Geico, Iscar and the Marmon Group. – Alec Hogg

(Bloomberg) – Warren Buffett’s eventual successor at Berkshire Hathaway Inc. will have one more industrial company to supervise, and a lot less cash to worry about, under the billionaire’s plan to buy Precision Castparts Corp.

That’s the sort of trade-off that the 84-year-old may be looking for as he prepares his company for a new generation of leadership and seeks to shrink a cash pile that stood at $66.6 billion on June 30. Berkshire has agreed to buy Precision Castparts in a deal valued at $37.2 billion, according to a statement Monday.

For the successor, a smaller cash hoard “certainly would give him or her time to focus on integrating and improving the operations of existing portfolio companies, without any pressure to make acquisitions any time soon,” Jim Shanahan, an analyst at Edward Jones, said in a phone interview. “Berkshire generates a lot of capital and they have a hard time finding opportunities to put it to work.”

Buffett’s firm will pay $235 a share in cash, and take on Precision Castparts’ net debt, the companies said. That’s 21 percent more than Friday’s closing price. Berkshire will spend about $23 billion in cash and borrow about $10 billion, Buffett told CNBC. Berkshire will hold off from megadeals for about a year, though it could still pursue smaller deals in the near term, he said.

Adding Precision Castparts and its 30,000 workers continues Buffett’s transformation of Berkshire to an industrial conglomerate with less reliance on reinsurance and stock picking. That also means his successor will need to be adept at buying and managing large companies.

Buffett has said Berkshire has a candidate ready to replace him as chief executive officer if needed, though he’s never publicly identified the person. Vice Chairman Charles Munger has dubbed two managers, energy chief Greg Abel and Ajit Jain, the head of Berkshire’s namesake reinsurance operation, as “world- leading” executives, stoking speculation that one of the two could take over.

Precision Castparts CEO Mark Donegan is the sort of leader who would fit well with Buffett or his successor, said James Armstrong, president at Henry H. Armstrong Associates, which manages about $600 million including shares of Buffett’s company.

“He’s got a terrific track record of doing acquisitions successfully at Castparts,” Armstrong said in an interview. “Those are the kinds of skills that benefit Berkshire.”

What Donegan wants is to run Precision Castparts, Buffett said on CNBC.

“He does not want to run Berkshire, and that’s true of most of our managers,” Buffett said. “They love what they’re doing. That’s the beauty of it.”

Many of Buffett’s biggest decisions have been guided by the idea of deploying capital without adding complexity to Berkshire’s headquarters in Omaha, Nebraska, which is staffed by about two dozen people. He invested more than $17 billion to take H.J. Heinz private and then merge that company with Kraft Foods Group Inc., while his partners at 3G Capital manage day- to-day operations at the combined foodmaker.

Buffett, who doesn’t pay a dividend and rarely repurchases shares, used his most recent annual letter to highlight companies that bring management expertise to ventures with Berkshire. The CEO also wrote that he and Munger enjoy when top deputies pursue their own takeovers

Such deals “deploy capital in activities that fit with our existing businesses and that will be managed by our corps of expert managers,” Buffett wrote. “This means no more work for us, yet more earnings, a combination we find particularly appealing. We will make many more of these bolt-on deals in future years.”

Buffett, who is also chairman, has said his son Howard could replace him as leader of the board, and that money managers Todd Combs and Ted Weschler could take over his duties overseeing investments. That would leave it to the new CEO to supervise the heads of dozens of units, and make decisions about capital allocation.

Buffett said Berkshire should look beyond stock pickers in seeking a chief, and operational experience could boost a candidate’s appeal for the role.

A new CEO will probably have to manage a large cash hoard even with a Precision Castparts deal, Armstrong said. Berkshire has been generating about $20 billion a year in net income. And some of the financing deals that Buffett provided to other companies may soon expire, which would allow his counterparties to return billions of dollars on which they are paying above- market yields.

“The day after Warren Buffett leaves” is when shareholders may push harder for Berkshire to pay dividends, said Meyer Shields, an analyst at Keefe Bruyette & Woods. “You can’t pressure Warren Buffett now. He doesn’t care what anyone thinks. The next management isn’t going to have the same kind of track record or influence. They’ll be subject to some pressure.”