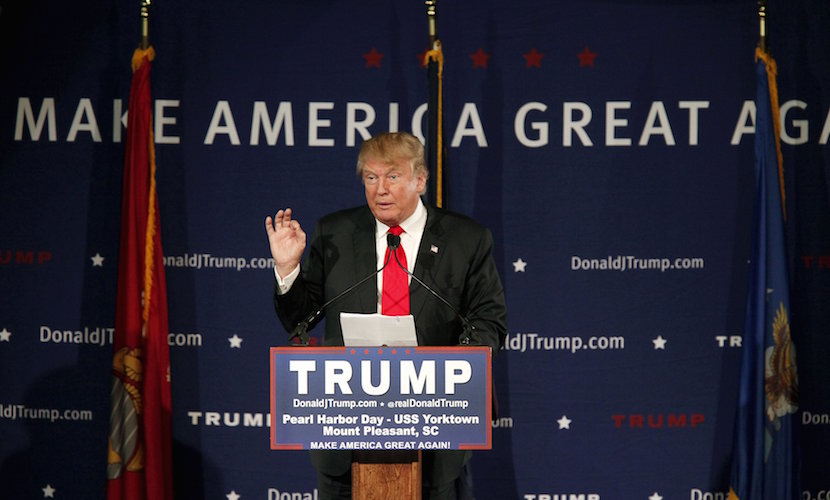 At first, The US Political Establishment refused to even discuss the prospect of a President Donald Trump. They giggled at his gaffes, ridiculed his seemingly extremist utterings and pointed at 50/1 odds offered by bookmakers to confirm his campaign would fizzle out as the novelty factor wore off. They were wrong. On Monday, the Republican Party’s Presidential train starts rolling in Iowa. And unless the pollsters are horribly wrong, Trump will easily win the state’s nomination – and continue sweeping aside his party rivals in the months ahead that follow. Right now, pollsters say he will lose to either of the most likely Democratic Party candidate, Hillary Clinton and Bernie Saunders. But this race still has a long way to go. Eight years ago, after leading the field for 90% of the campaign, Clinton’s hopes were blown away by the Barack Obama’s strong late run. Trump’s anti-politician message is resonating powerfully with middle America. Given the way the trust of citizens in Governments has been nosediving around the world, he may well have found exactly the right message at the right time. Meet the man very possibly the next Commander in Chief of the largest military and economic power on earth. – Alec Hogg 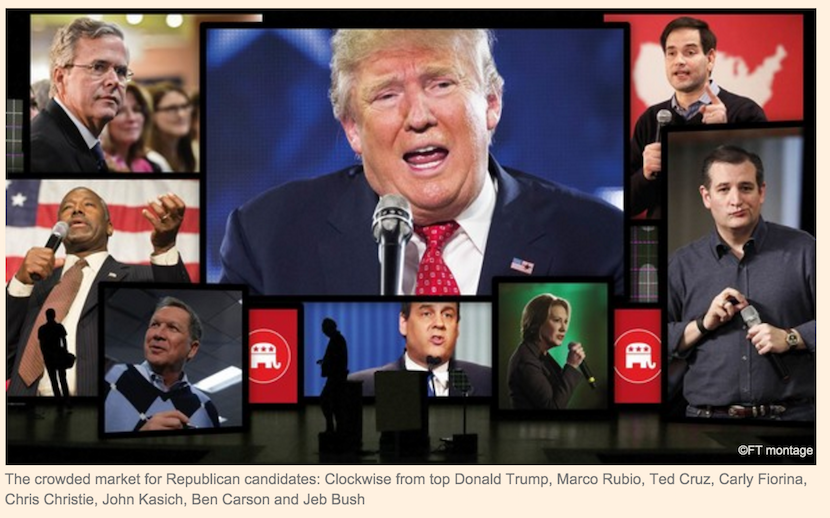 When the frontrunner for the Republican presidential nomination can get away with declaring that he “could stand in the middle of 5th Avenue and shoot somebody” without losing votes, it is clear that the rules of US politics are being rewritten. That is precisely what Donald Trump, the New York property mogul, has succeeded in doing with his campaign for the White House.

Seven months after the bombastic billionaire jumped into the race, the former star of The Apprentice is within striking distance of winning the Republican caucus in Iowa, an outcome that the party’s establishment once viewed as inconceivable.

On the eve of the Iowa caucuses, which mark the first step towards choosing the presidential nominees, Mr Trump may have the last laugh. His campaign has caught fire across the US, as acolytes praise his willingness to jettison political correctness by calling for the deportation of 11m illegal immigrants or hitting out at Fox News and the Republican establishment.

Mainstream Republicans are terrified at the idea of Mr Trump becoming their nominee because they believe his anti-immigrant rhetoric will hand the White House to the Democrats in November. His dominance in the polls – an average of 36 per cent of Republicans prefer him to the other 11 contenders, according to Real Clear Politics – has perplexed people around the world who cannot fathom how a country that only eight years ago elected its first black president could be playing political footsie with “The Donald”.

“It’s complete drama and I guess when you’ve been a reality TV star for so many years it comes natural. He’s a really good marketer and actor like he was on his reality TV show,” says Eric Cantor, the former Republican House majority speaker who was ousted from Congress in 2014 by a populist movement similar to the one propelling Mr Trump. “That’s the aspect of our campaign that I think people not from our country just really can’t quite get their arms wrapped around.”

But the master of hyperbole who vows to “Make America great again” has also baffled pundits in Washington with his popularity. From caustic comments about Mexicans and Muslims to questioning Senator John McCain’s status as a war hero – “I like people that weren’t captured” – he has redrawn the contours of the 2016 race.

His fans view what others might see as crass comments – “If Ivanka weren’t my daughter, perhaps I’d be dating her” – as evidence of authenticity. They see him as a non-politician who will challenge a political system that no longer works for ordinary people. 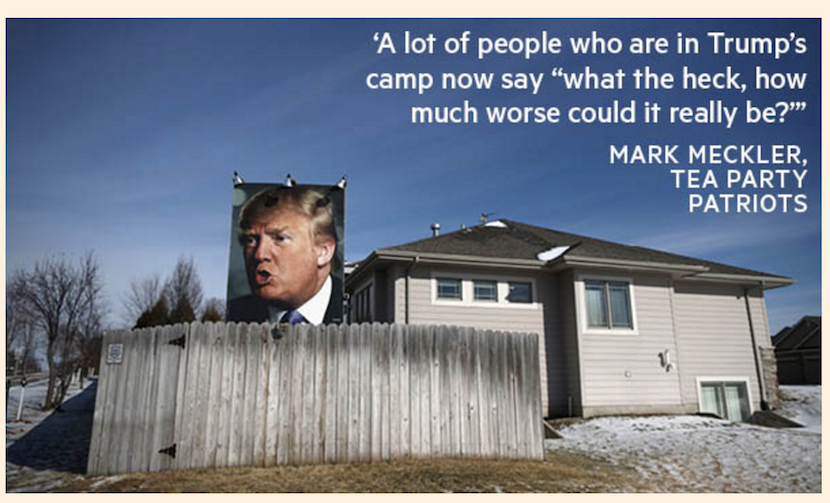 Highlighting his unconventional campaign, Mr Trump has dominated news coverage all week with his plans to boycott the Republican debate hosted by Fox Newson Thursday because of a spat over his treatment at the hands of Megyn Kelly, a presenter on the network.

His decision to spurn the network that has helped propel the careers of countless Republicans would be unthinkable for any other GOP contender. And while others court wealthy donors, such as casino magnate Sheldon Adelson, the biggest donor in the 2012 race, Mr Trump’s wealth means he does not feel obliged to kiss the ring.

“Here is a guy who can say whatever he wants and … do whatever he wants,” says Walter Jahncke, owner of the Northside Cafe in Winterset, Iowa, who has not picked a candidate. “We have lived in a world where politicians have to be so cautious about everything … because of political correctness that you don’t feel like you’re even electing a human being. I really like the fact that there is a guy out there who can screw up and the media or public opinion doesn’t shut him down.”

Yet while the Republican establishment views Mr Trump as a huge headache, he is not their only problem. His closest rival is Ted Cruz, the firebrand Texas senator who won his seat with the backing of the Tea Party and is loathed by his Senate colleagues. 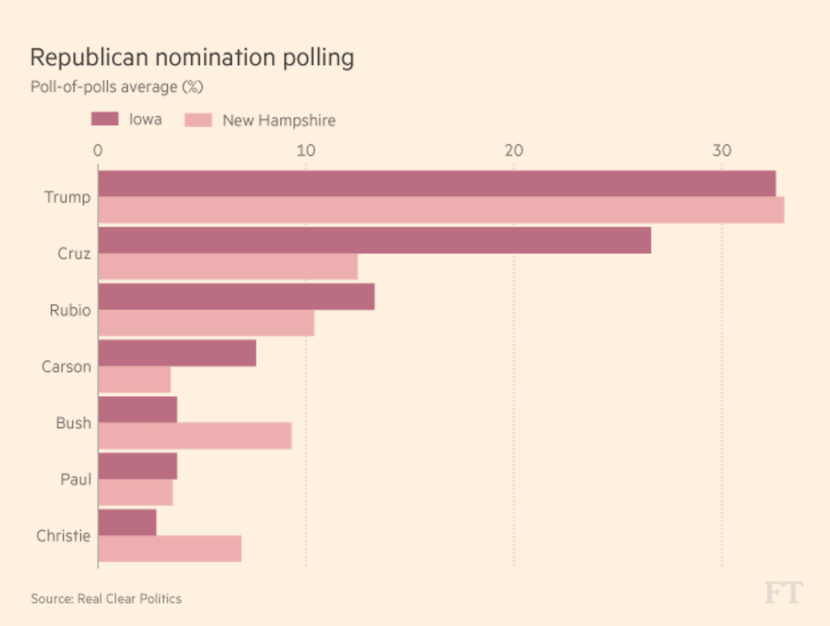 While there are differences between the voters supporting Mr Trump and Mr Cruz, they overlap to a large degree in their anger at Washington. A recent Gallup survey found that 80 per cent of Americans disapprove of the way Congress is doing business.

But Tea Party Republicans are particularly angry at the GOP leaders for failing to convert their Congressional strength, including the biggest House majority since 1928, into an effective challenge against President Barack Obama.

Jim Jordan, the Ohio Republican who heads the House Freedom Caucus that engineered the resignation of John Boehner as House speaker last year, says GOP voters are sick of politicians who do not act on their campaign promises. “Margaret Thatcher used to say you win the debate before you win the vote,” he says. “We’ve been way too willing to not have the debate and just forfeit.”

Even though the Tea Party ended the political careers of Mr Cantor and Mr Boehner, two of the most powerful men in Washington, the Republican establishment did not think that the movement would play a big role in the presidential race. 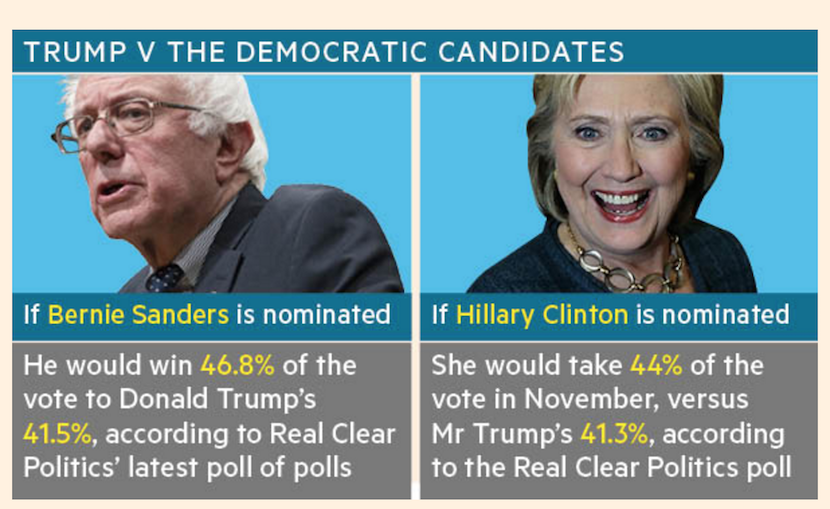 “People clearly underestimated the rejection of Republican party leadership,” says Vin Weber, a former Minnesota congressman who believes the GOP thought that the Tea Partyhad waned. “There might have been a false sense of normalcy.”

Mark Meckler, co-founder of the Tea Party Patriots, says people who are surprised at the pent-up anger have not been paying attention to US politics. “The best way to describe Trump is the ‘what the heck’ candidate,” says Mr Meckler. “We all know that we are getting repeatedly shafted by politicians … a lot of people who are in Trump’s camp right now say, ‘what the heck, how much worse could it really be’.”

Polls show that Mr Trump draws much of his support from white, working-class men with a high-school education. While the US economy has recovered from the global financial crisis, they have not sensed much improvement because of stagnant wages. According to the Economic Policy Institute, the median income for households, excluding the elderly, fell 12 per cent from 2000 to 2014.

Many are angry about illegal immigrants, who are blamed for depressing wages even though they are often doing jobs Americans shun, and some are uncomfortable with the cultural changes that come with the changing ethnic composition of America as the nation becomes less white. 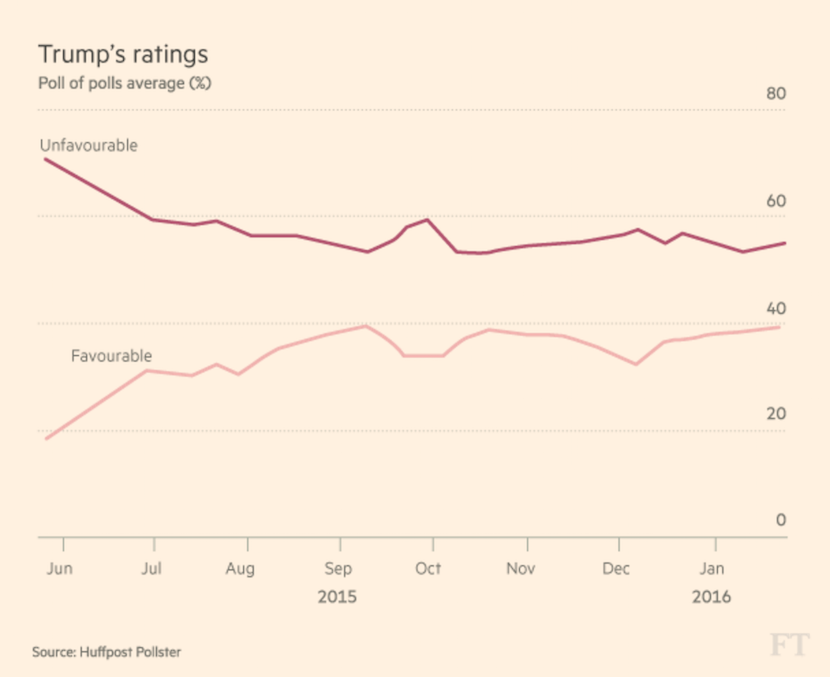 David Frum, a former speech writer for George W Bush, says there were signs of discontent in the fact that the number of people who voted in 2012 was several million less than the 2008 total, despite a 5m increase in eligible voters, but added that both parties were blind.

Theda Skocpol, a Harvard professor who has studied hundreds of Tea Party groups, says it is not surprising that Mr Trump is doing so well. Tea Party activists are “very worked up about immigration” and “looking at a country that is changing socially and culturally”.

Mr Weber says one of the causes of the anger driving Trump supporters is the increasing lack of social mobility in the US because of a deteriorating education system, a fall in workforce participation and, to a lesser extent, globalisation. Republicans could once argue that upward mobility eliminated the need for income redistribution, but that economic compact is under strain. “The notion of upward mobility in America is largely a fiction now,” he says.

Mr Trump has tapped into this zeitgeist of white, working-class America. When he says “America doesn’t win any more”, his fans nod in agreement. When he blames China, Japanor illegal immigrants from Mexico, he again has receptive ears. But his genius lies partly in his ability to convince ordinary Americans that the man who lives in luxury inManhattan and flies in his own Boeing 757 will fight for their interests.

Speaking at the John Wayne museum in Winterset, Aissa Wayne, the actor’s daughter, says the tycoon’s wealth is irrelevant. “I think it has to do with your love for your country,” says Ms Wayne just after endorsing Mr Trump. “We Americans have so much in common. It doesn’t matter if you’re from Winterset or Manhattan . . . I want somebody who is going to have America’s back.”

Tom Daschle, the former Democratic Senate majority leader, does not agree with Mr Trump, but he is impressed by the way the tycoon communicates. 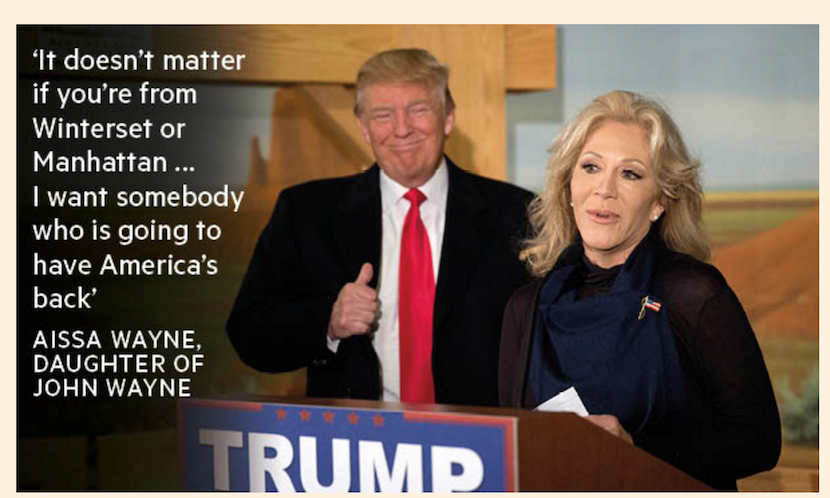 “As much as I deplore his message, he is an impressive communicator,” says Mr Daschle. “He has a rhetorical style that people are looking for. They want someone assertive, strong, never in doubt even if he is wrong. That is the kind of personality that under these circumstances seems to get traction.”

Political observers find it hard to comprehend how a man who provides so few policy details can be getting so much traction. When someone at a recent rally in Iowa shouted “how?” in response to a vague promise, Mr Trump bellowed back “just watch!”. His success appears to lie in his ability to convince people to buy into a brand that he has cultivated as the boss on The Apprentice.

“For almost a decade Donald Trump has been on television once a week playing the part of America’s most successful and dynamic decision maker,” says Mr Frum. “He is not like Beppe [Grillo, leader of the populist Five Star Movement] in Italy. He plays a commander-in-chief . . . who gets things done.”

That is little consolation to mainstream Republicans. While some can rationalise his success as the product of a global brand who has mastered social media for elections, that does not help the centrist candidates, Florida senator Marco Rubio, former Florida governor Jeb Bush, Ohio governor John Kasich, and New Jersey governor Chris Christie, who are struggling to make a stand.

When Iowans attend the caucuses on Monday and New Hampshire residents vote eight days later, the world will be watching to see if Republicans veer back to a more traditionalGOP candidate, or whether the Manhattan businessman will show that he can seal the deal.

Establishment Republicans will be hoping that Ken Crow, a Tea Party activist in Iowa, is wrong when he says Americans will vote for Mr Trump because “he is John Wayne in an Armani suit”.