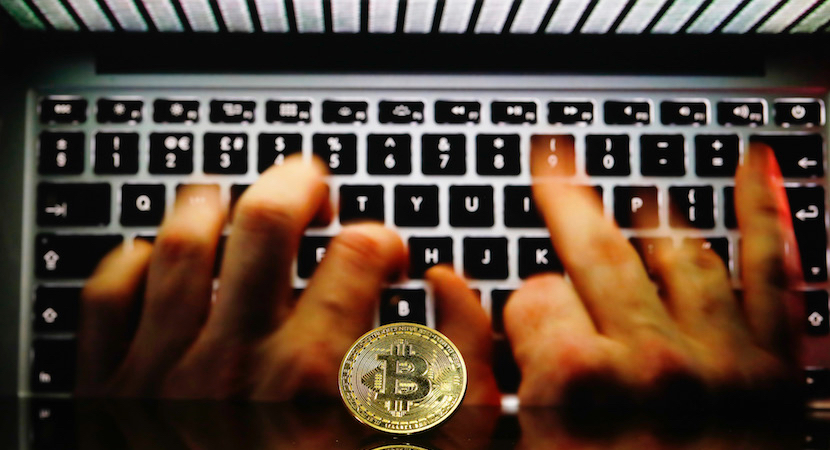 South Africans were recently rated as 14th most intrigued by cryptocurrency, in the world. This was according to a global survey of Google searches. Invezz.com reported that South Africans search for ‘cryptocurrency’ an average of 7,900 times a month. Software specialist LSD Open was reportedly one of the first privately owned local firms to invest in Bitcoin when it invested R2m of its capital in the digital currency earlier this year. Cryptocurrency investing has become common enough to garner attention from the South African Revenue Service, which has begun to audit people who trade in digital currencies. After the collapse of Mirror Trading International, the Financial Sector Conduct Authority has been jolted into a crackdown on crypto traders. As South Africa dips its toes into crypto waters, many people are looking to decipher digital currencies and how they work. Don Kruger of DCX Capital explains what Bitcoin halving and mining are and how a finite number of Bitcoin will be able to trade indefinitely and, in theory, eventually stabilise enough to become a viable global reserve currency. – Melani Nathan

Bitcoin halving and the prominence of Index Investing

What is Bitcoin (BTC) halving and why does it matter? Halving refers to the number of coins that miners receive for adding new transactions to a bisected (split-in-half) blockchain. In other words, once a halving event occurs, the reward for mining the virtual asset is divided in two. This process continues approximately every 4 years until the last Bitcoin is eventually mined. The final Bitcoin is projected to be mined in the year 2140. The rationale underpinning crypto halving is a significant driver of current investor sentiment around the globe and may enrich our understanding of cryptocurrency macroeconomics. This article breaks down everything you need to know about halving, and why it’s a bigger deal than you may think.

Miners are the network of computers responsible for validating and processing transactions in the blockchain, and in return, they are rewarded in the currency of the system itself. In 2009 the reward for mining in the Bitcoin blockchain was 50 BTC per block. In 2013 the first halving event took place, whereby, the reward was mitigated by 50% to a mining reward of 25 BTC. In 2016 the reward fell to 12.5 BTC, and in May of 2020, it was 6.25 BTC. The next halving event is projected to take place in 2024 with a reward of 3.125 BTC and so forth… Halving events reduce the rate at which new coins are added to the blockchain and consequently reduce the availability of supply. There is a fixed supply of 21 million Bitcoin available to the system. The law of demand and supply is an immemorial doctrine of economic theory affirming a reduction in supply corresponds to an increase in price4. To place the economics of halving in a more digestible context, let’s consider gold. Suppose the amount of gold mined out of the Earth was cut in half every 4 years. If the value of gold is underpinned by its scarcity then a halving event of this commodity would theoretically drive the price higher. This is the pretext of the stock-to-flow5 (S2F) model discussed in our previous article. The allure of BTC price appreciation is what has drawn so much attention to the former halving events. The amount of supply entering the system shrinks with each event, but demand remains equivocal to global market forces. A brief investigation of the correlation between halving events and BTC price reveals each phenomenon has resulted in momentous price escalation, thus conforming to the ageless notions of economic theory first described by Adam Smith in 17766. Though the premise of this article does not extensively recite the primordial works of economic theory, it is worth granting appreciation for how well it has fared in the modern technological context of cryptocurrencies.

According to the Bitcoin algorithm, there will be 33 halving events in total, after which the fixed part of the block reward will become less than one Satoshi (the smallest unit of a Bitcoin). Essentially, amounting to 0. Once all the Bitcoin in the system have been mined, miners will be compensated with transaction fees – thus incentivising them and theoretically keeping the system in perpetual equilibrium. Intrigue has emerged among crypto advocates and academic scholars about the macroeconomic influence of halving events on the long-run volatility of the price. The question arises whether Bitcoin holds the potential for greater price stability with each halving event, ultimately making it a viable contender for a global reserve currency in the coming decades. However, Bitcoin halving events have not directly corresponded to a doubling in price as one would intuitively anticipate. Instead, the impact of halving events has been an exponential growth in price. This escapade may best be explained by the network effect of Metcalfe’s law7 declaring the value of the Bitcoin network is proportional to the square number of connected users in the system (n2). Accordingly, a logarithmic scale (y-axis) on the following BTC chart more comfortably illustrates how each halving event has brought forth a burgeoning in price. 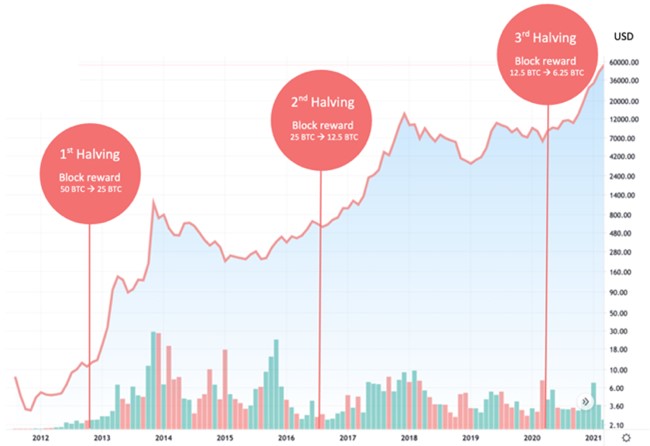 Bitcoin halving events indeed shed-light on the nature of its 4-year cyclicality. It also illuminates the economic influence of supply dynamics alluding to forthcoming price appreciation. Since its inception in 2009 a growing number of investors have acknowledged the indomitable potential of decentralised payment systems embedded in blockchain validation procedures. What was

once a niche body of technological understanding is now starting to enter the mainstream of institutional finance. However, regardless of the long-run promise surrounding price appreciation, a substantial degree of risk remains when investing in a single cryptocurrency. What are institutional investors doing to gain exposure to this disruptive technology and simultaneously mitigate risk?

Exchange-traded-funds (ETFs), and index tracking, are emerging as the favoured approach to contemporary virtual-currency investing among investment professionals. ETFs remedy the elevated risk of holding a single cryptocurrency, and instead provide broad exposure to a given set of cryptos in the form of a low-cost investment instrument. ETFs were first introduced to markets in the early 1990s8, and have attested enormously as commonplace for passive investors. In the decades since its creation, ETFs have proven a substantial success and set the stage as a low-cost basket-trading vehicle. As a matter of course, cryptos and index tracking have combined in the realm of modern financial innovation forming an enticing symbiotic relationship. South African institutions, and retail investors alike, have ineluctably turned to the EC10 index for diversified exposure to the crypto market. The EC10 index holds the top 10 cryptocurrencies as assets and is functionally synonymous with the structure of an ETF. The remainder of this article illustrates why investors are turning to the EC10 instrument as an imperative diversification tool. Over the preceding 4-year cycle the performance of a South African money market portfolio with a mere 3% allocation to the EC10 fund, against the Satrix 40 (STX40), Gold (ETFGLD) and Platinum (ETFPLT) has effectuated as follows: 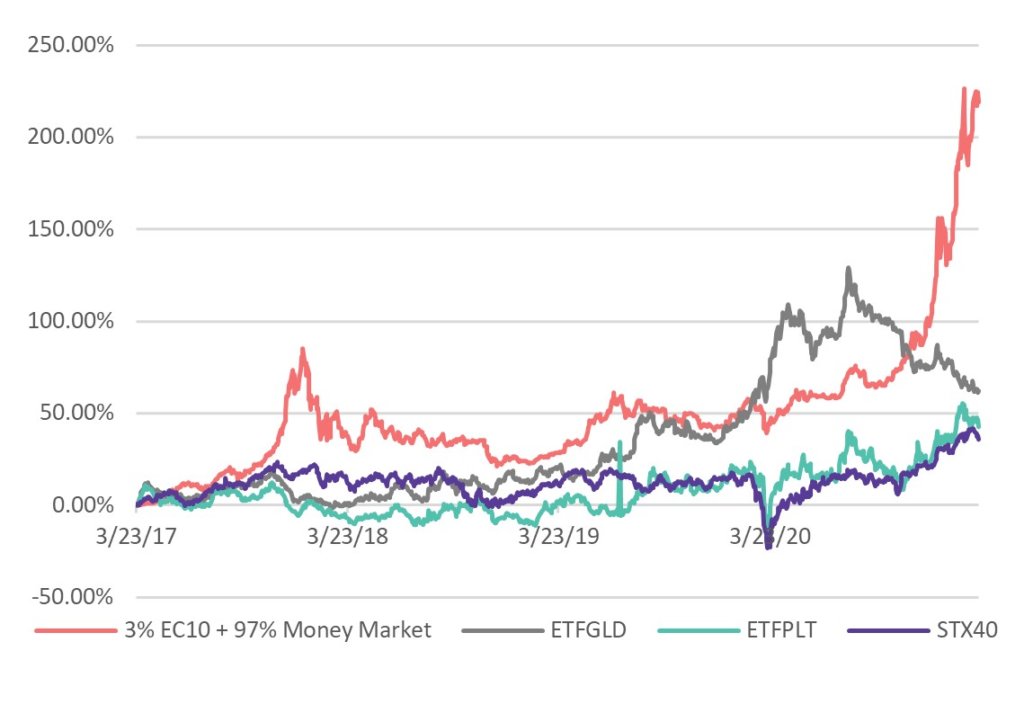 The chart demonstrates how a small position in the EC10 instrument across the former 4-year cycle has resulted in superior investment portfolio returns against the aforementioned ETFs. Namely, a 3% allocation of the EC10 fund in a money market portfolio outperformed Gold by 157.07%, Platinum by 176.49% and the top 40 South African equities by 183.27%. These numbers reveal how a modest position in cryptos have availed as a superior hedge against inflation, and admittedly a competitive investment portfolio. A worthy contender of a dedicated EC10 position is perhaps the 1nvest Palladium fund (ETFPLD) – awarded 1st place for the South African Listed Tracker Award (SALTA). The 1nvest Palladium fund has arisen as the top performing index fund on the JSE for the past 3 years. 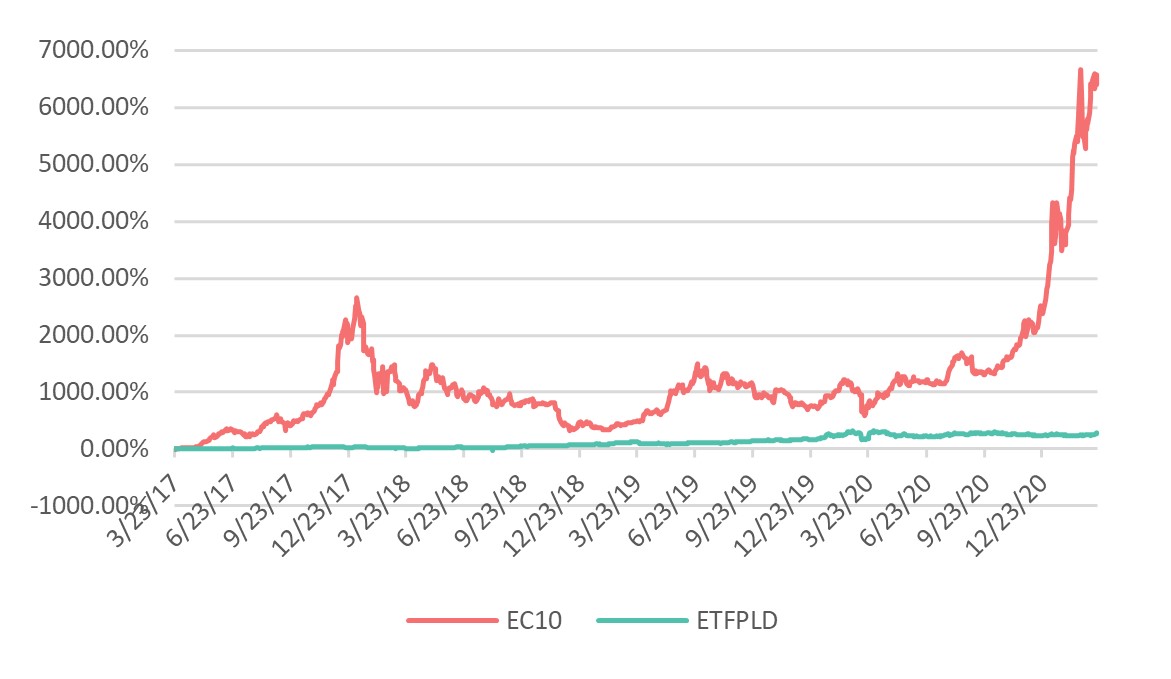 Across this period, the EC10 crypto instrument outperformed the JSE’s top performing ETF by 6126.58%. As institutional capital continues to enter the realm of virtual currencies, we contend the potential for global adoption remains robust. What was once a contentious technology, dismissed by academics, financial professionals and understood by few, is becoming a conventional asset class. The appeal of blockchain technology remains resilient and the captivation endures. The economics of halving ensue and consensus continues to spread. DCX Capital is a leading crypto facilitator in South Africa providing a secure way to gain diversified exposure to the crypto industry through the EC10 index. The Index holds Bitcoin and 9 of the most valued other units, and is the ideal way to achieve diversified exposure to the crypto asset class. Invest safely, and “hodl” onwards.