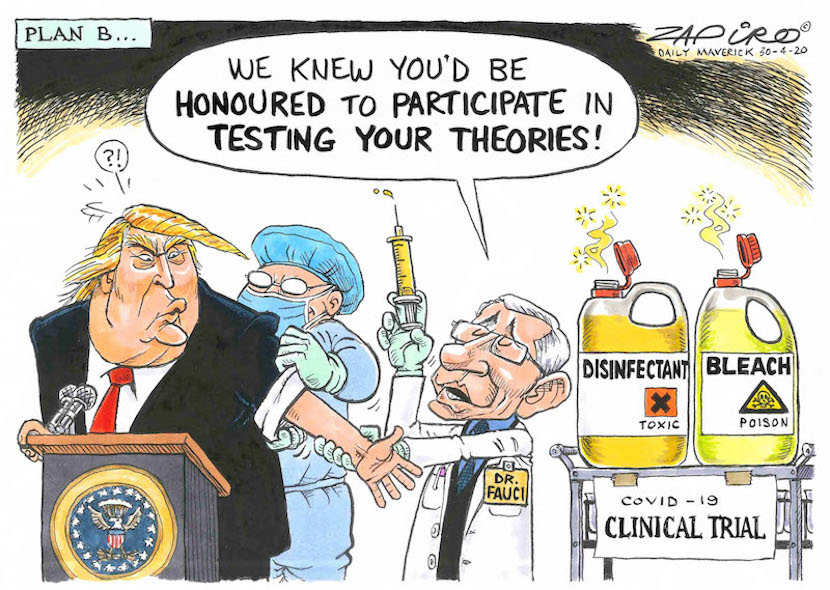 The State-driven coronavirus narrative is unravelling. Rapidly. Yesterday, thousands of emails written by and to Dr Anthony Fauci, medical advisor to the US president, were put into the public domain. They strip the veneer from a carefully managed message. One which was mostly supported by mainstream and social media through self- and direct censorship. Ironically, some  3 200 Fauci emails, now available for anyone to download, have been exposed primarily through the legal efforts of two titles which were among the strongest propagators of the official message. For context, here’s this morning’s “Best of The Web” column from the Wall Street Journal. – Alec Hogg

Highly skilled in the ways of Washington, Dr. Anthony Fauci persuaded a reluctant President Donald Trump to endorse shutting down much of the U.S. economy in the spring of 2020. After Mr. Trump turned against the idea, many governors continued to mandate shutdowns, supported by bleak pronouncements from Dr. Fauci and his adoring media fan base. The broad lockdown was a national disaster, yielding questionable public-health benefits and a mountain of new federal debt that America’s children will spend many years trying to finance. Prior to selling Mr. Trump on this radical therapy to address Covid-19, did Dr. Fauci disclose everything he knew about the possibility that a Chinese lab partly funded by his own institute might be the source of the pandemic?

Publicly, Dr. Fauci played down this possibility in 2020. But a trove of his emails obtained by two media outlets suggests that early in the pandemic, he had reason to take this potential scenario very seriously.

In our bizarre media age, since the two outlets are generally pro-Fauci and anti-Trump, it’s not easy to find the news they’ve uncovered, even in their own reports. Instead, Dr. Fauci is cast as a tireless and dedicated public servant who—don’t laugh—is uncomfortable in the media spotlight.

“Anthony Fauci’s Emails Reveal The Pressure That Fell On One Man,” says a headline in Buzzfeed. “Thousands of pages of communications obtained by BuzzFeed News show how Fauci tried to keep Americans calm and develop an effective strategy despite conflicts with the Trump administration,” says the subhead.

Over at the Washington Post, Paige Winfield Cunningham describes the work of her colleagues:

Hundreds of pages of emails obtained by The Post and BuzzFeed News through Freedom of Information Act requests confirm the way Fauci is already viewed by many — as diplomatic, tactful and responsive to inquiries from the public, a quality which often kept him up late at night answering emails.

“The correspondence from March and April 2020 opens a window to Fauci’s world during some of the most frantic days of the crisis, when the longtime director of the National Institute of Allergy and Infectious Diseases was struggling to bring coherence to the Trump administration’s chaotic response to the virus and President Donald Trump was seeking to minimize its severity,” The Post’s Damian Paletta and Yasmeen Abutaleb write.

“Fauci’s actions during that period and beyond remain an intense focus for many Americans and political leaders,” they add. “During daily televised briefings at the White House, Fauci emerged as an at times reluctant — and polarizing — media star: To Trump supporters, he was a contrarian who seemed to undermine the president at every turn, while others viewed him as a reassuring voice of reason.”

Since the two outlets that did so much to promote the Russia collusion hoax are still reluctant to let go of any anti-Trump narratives, news consumers may need to rely on other publications to tell them what the Post and Buzzfeed found. Nicholas Jensen takes a crack in the Australian:

America’s top medical adviser Anthony Fauci was informed as early as February 2020 that Covid-19 exhibited unusual viral characteristics which could have potentially been engineered in a lab, according to emails published.

A trove of private correspondence, obtained by The Washington Post and Buzzfeed, reveal some of the crucial moments leading up to the pandemic in early 2020 when Dr Fauci, the director of the National Institute of Allergy and Infectious Diseases, sought urgent information regarding the nature and origins of Covid-19… In one email from Kristian Andersen, a virologist at the Scripps Research Institute in California, Dr Fauci was told that Dr Andersen and his fellow scientists had to “look really closely at all the sequences to see that some of the features (potentially) look engineered”.

The email dated February 1, 2020 said Mr Andersen and three other respected colleagues had discovered a genome “inconsistent with expectations from evolutionary theory”.

Was Covid-19 man-made? The Fauci email exchange was triggered by a Jon Cohen piece on the possible origins of the virus and theories that it might be connected to China’s Wuhan Institute of Virology. Mr. Cohen noted:

Concerns about the institute predate this outbreak. Nature ran a story in 2017 about it building a new biosafety level 4 lab and included molecular biologist Richard Ebright of Rutgers University, Piscataway, expressing concerns about accidental infections, which he noted repeatedly happened with lab workers handling SARS in Beijing. Ebright, who has a long history of raising red flags about studies with dangerous pathogens, also in 2015 criticized an experiment in which modifications were made to a SARS-like virus circulating in Chinese bats to see whether it had the potential to cause disease in humans… Ebright tells ScienceInsider that the 2019-nCoV data are “consistent with entry into the human population as either a natural accident or a laboratory accident.”

Whatever issues were raised with Dr. Fauci via the February email, by March Mr. Andersen and colleagues pronounced in a paper in Nature Medicine:

Our analyses clearly show that SARS-CoV-2 is not a laboratory construct or a purposefully manipulated virus.

In addressing why his March paper expressed a certainty not featured in his February email correspondence with Dr. Fauci, Mr. Andersen of the Scripps Institute now tweets:

As I have said many times, we seriously considered a lab leak a possibility.

However, significant new data, extensive analyses, and many discussions led to the conclusions in our paper.

What the email shows, is a clear example of the scientific process.

The problem with this explanation is that it is precisely the lack of data out of China more than a year later that has so many scientists saying that a natural origin has not been confirmed—and a laboratory origin cannot be ruled out.

Professor Ebright at Rutgers, who was quoted in the 2020 story that sparked the email communication, is among those who are not exactly satisfied with the Andersen explanation. Mr. Ebright tweets:

Speaking of early public pronouncements on the potential of a laboratory source for the pandemic, the Washington Post has added a correction above a February 2020 story:

Earlier versions of this story and its headline inaccurately characterized comments by Sen. Tom Cotton (R-Ark.) regarding the origins of the coronavirus. The term “debunked” and The Post’s use of “conspiracy theory” have been removed because, then as now, there was no determination about the origins of the virus.

But still uncorrected is the opening of the piece, which reads:

Sen. Tom Cotton (R-Ark.) repeated a fringe theory suggesting that the ongoing spread of a coronavirus is connected to research in the disease-ravaged epicenter of Wuhan, China.

Cotton referenced a laboratory in the city, the Wuhan National Biosafety Laboratory, in an interview on Fox News’s “Sunday Morning Futures.” He said the lab was near a market some scientists initially thought was a starting point for the virus’s spread.

“We don’t know where it originated, and we have to get to the bottom of that,” Cotton said. “We also know that just a few miles away from that food market is China’s only biosafety level 4 super laboratory that researches human infectious diseases.”

The questions raised by Mr. Cotton in his Fox interview with Maria Bartiromo —also noted in a book she co-authored with your humble correspondent—still demand answers. And by exploring the possibility of a connection between Covid-19 and coronavirus research in Wuhan, Mr. Cotton was not repeating a fringe theory. Researchers calling for further investigation of a potential laboratory origin of the pandemic include a roster of highly credentialed scientists in the field.

Also, billions of non-credentialed people all over the world deserve an explanation from Dr. Fauci. Whether or not he disclosed what he knew to Donald Trump in 2020, the allegedly publicity-shy government official needs to share everything he knows about the U.S. taxpayer money that went into Wuhan and the global horror that came out of it.

James Freeman is the co-author of “The Cost: Trump, China and American Revival.”