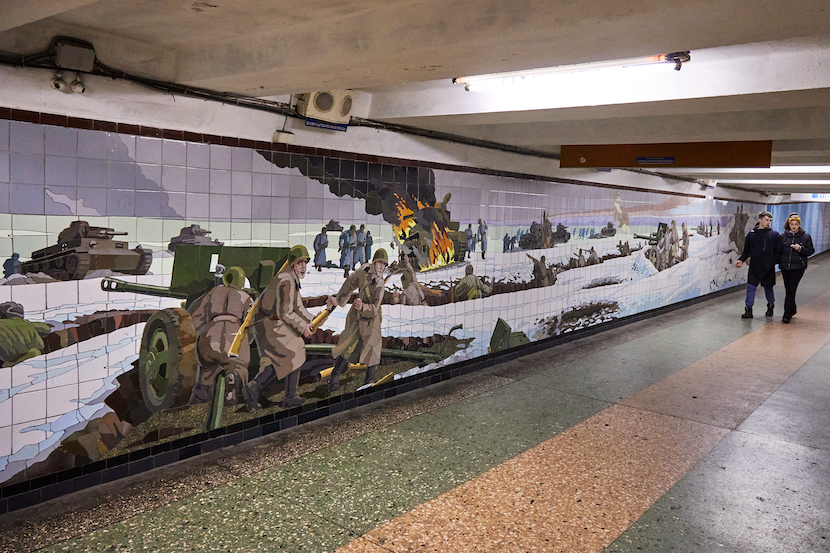 Should this analysis and its predictions be correct, the macho, shirtless, hunting ‘tsar’ who ordered the reckless invasion of Ukraine, may end up cornered, his teeth bared with one hand on the nuclear button. That’s the world’s greatest fear. A world that has united to make Russia a virtual pariah while pragmatically supporting the Ukrainians who are literally fighting for their lives and futures. Russian troops and armaments, run on a budget nearly 13 times that of Ukraine’s are unexpectedly bogged down, demoralised and shocked to be facing such fierce resistance. Here Ivo Vegter outlines all the reasons why Putin has so gravely miscalculated. Win or lose, he’s started his own slippery slide, which will probably see him ousted from within. Russia can scarcely survive the existing consequences, listed in graphic detail here by Ivo Vegter, writing in the Daily Friend. It’s a fascinating read and explains why the world’s attention is so riveted. – Chris Bateman

The invasion of Ukraine appears to have been a grave miscalculation on the part of Russian president Vladimir Putin. It would be surprising if his regime survives this.

I used to think – like Russia’s president Vladimir Putin – that the West was weak and spineless, divided by culture wars and distracted by petty political correctness. I used to think that if Putin wanted to invade Georgia, or Ukraine, or any other non-NATO state on his borders, there would be little to stop him.

Putin views the fall of the Soviet Union as a great tragedy and humiliation. He views himself as a sort of irredentist Peter the Great, who can return Mother Russia to her former glory and restore it to what he believes is its rightful place as a world power.

The thing is, Russia is not a world power. If it didn’t have nuclear weapons and natural gas, it would be just another stagnating economy run by a tinpot dictator. Compared to the United States, the EU and China, Russia’s GDP is an accounting error. 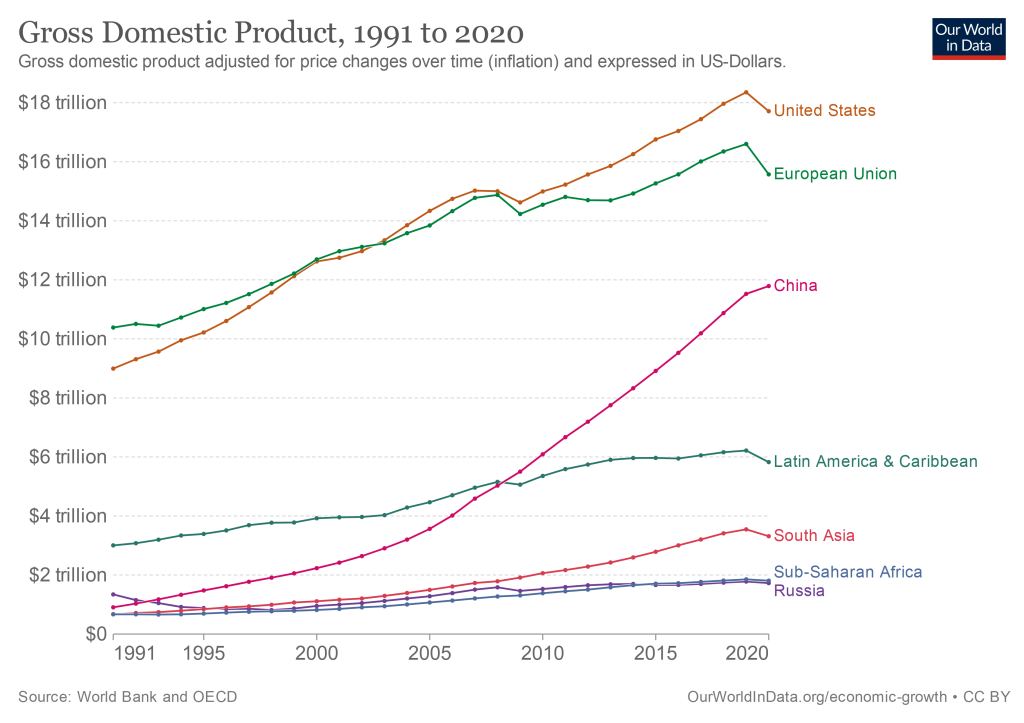 Since the fall of the Soviet Union, even sub-Saharan Africa has outperformed it. If I weren’t loath to use words like ‘shithole’, I’d use it for Russia. And all of this happened on Putin’s watch or, briefly, that of his puppet Dmitry Medvedev.

(This explains why South Africa is sucking up to Russia, though: Putin is our buddy at the wrong end of every conflict and the bottom end of every economic chart.)

So, you can see why Vlad Putin has a terrible inferiority complex. This explains his need to be seen macho and shirtless on a horse, or hunting with a very big gun, and why he is suspiciously homophobic.

When Putin’s invasion of Ukraine proper began on 24 February 2022, it seemed Russia would fairly easily win, and that neither NATO nor any other Western force would put boots on the ground (or even planes in the sky) in support of Ukraine.

It should have been a doddle, and I’m sure that’s exactly what Putin expected. But it wasn’t.

Ukraine’s president, Volodymyr Zelenskyy, turned out to be more than just a comedic actor, ballroom dancer and populist. He could have fled to Lviv, or even to Poland, but he stayed in Kyiv, rallying the Ukrainian armed forces and the Ukrainian people to resist Russia with everything they had.

And they did. On day four of the invasion, Russia has hardly advanced at all from its opening day positions and hasn’t taken any major cities. 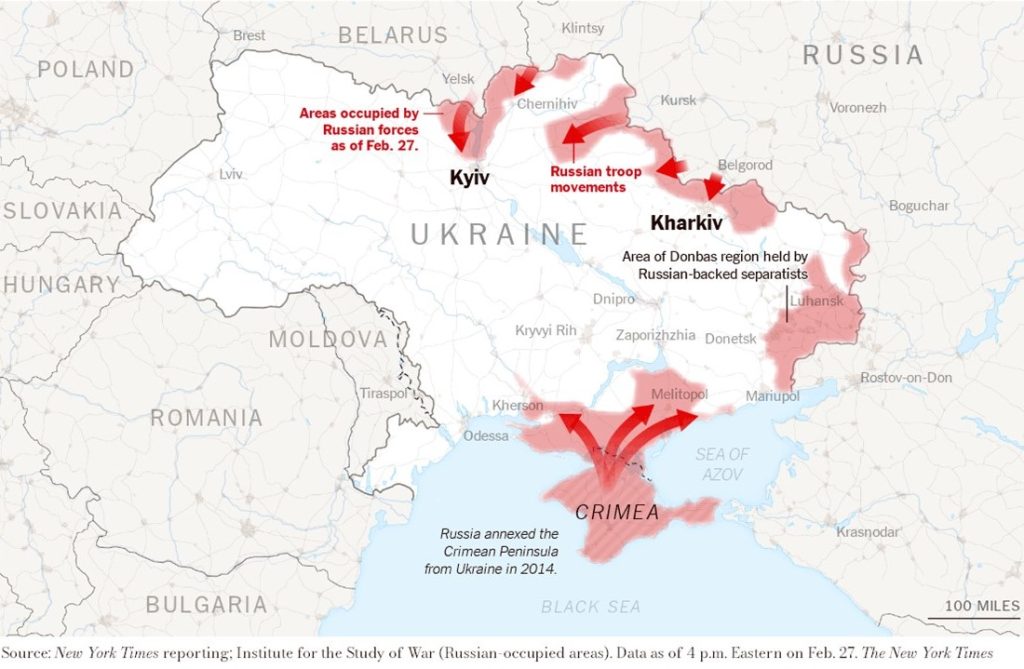 It would be a mistake to trust media reports on casualties since Russia is keeping very quiet. Ukraine is pumping out propaganda, and armies of social media junkies are milking the war for clicks, likes and advertising revenue.

Yet, it seems clear that the Russians have taken heavy casualties, have failed to win air superiority, have overstretched supply lines, and that their army is demoralised, directionless and even hungry.

Russia isn’t the first and won’t be the last military power to discover, painfully, that people who are fighting to defend their families, their children and their homeland are ten times the soldiers that underpaid, unmotivated conscripts are.

Russia’s silence alone should speak volumes, too. It isn’t bragging about glorious victories, because there aren’t any.

“We captured an abandoned nuclear power station the glorious Soviet Union managed to blow up 36 years ago,” isn’t exactly awe-inspiring.

Putin has tried to justify the war by blaming it on Ukraine’s proposed accession to the North-Atlantic Treaty Organisation (NATO).

He claims that NATO’s eastward expansion constitutes ‘aggression’, even though there is literally zero chance that any NATO country, incumbent or new, would ever attack Russia unprovoked.

On the contrary, by invading Ukraine, Putin has proven that the non-NATO countries on his western flank really do need NATO protection. He threatened a military response should Sweden and Finland choose to join NATO. Instead of scaring them off, that might be just the motivation they need to apply for membership.

Germany has turned volte-face on two fronts. It dropped its historic objection to sending arms to conflict zones and will supply military weapons to Ukraine. In addition, it announced a major, permanent boost to its defence spending. Having Germany take a more robust posture in NATO has been an objective of its alliance partners for decades, but Germany has always been timid, having been on the losing side in World War II. Putin’s invasion appears to have achieved what US and European persuasion could not.

In NATO countries everywhere, bitter political foes stopped their domestic squabbles to unite in condemnation of the invasion of Ukraine.

So, by lashing out at Ukraine over the supposedly ‘aggressive’ eastwards expansion of NATO, Putin has revitalised NATO and given it a new purpose. His actions have made it clear that Ukraine does belong both in NATO and in the European Union, whereas Russia does not. If Ukraine survives, I expect it will be on a fast track to EU and NATO membership.

Putin described the ousting of Ukraine’s pro-Russian president Viktor Yanukovych in 2014 as a ‘putsch’, without mentioning that the Ukrainian Parliament voted him out of office after he fled the country in the wake of widespread popular protests against his authoritarian and deeply corrupt rule. This is the guy who, in the midst of poverty and economic crisis, built an outrageously opulent palace using money that belonged to the Ukrainian people. Even if Yanukovych had been a modern Trajan, however, his ouster was a purely internal matter, offering no grounds for war, then or now.

Putin has also slandered the Ukrainians as ‘neo-Nazis’. This is not entirely far-fetched, though it is a gross over-generalisation. Ukraine does have a neo-Nazi militia problem. These militias have successfully fought against Russian-supported separatists in the breakaway Donbas region, which must have annoyed Putin. Most Ukrainians, however, were grateful to the militia forces for defending their country when the formal military wasn’t up to the task.

Again, though, the existence of right-wing militias in a country does not constitute a valid casus belli. If neo-nationalism, nativism and xenophobia are so offensive to Putin, why did he have a cordial meeting with Hungary’s right-wing prime minister Victor Orbán mere weeks ago?

Putin has also accused Ukraine of genocide, over its response in containing Russian-backed separatist forces in Donetsk and Luhansk. Nobody else considers that response genocidal, or anything other than defensive. The only genocide in Ukraine was the Holodomor, perpetrated by the very Soviet Union that Putin mourns.

Putin apologists have brought up Western military interventions, like those in the former Yugoslavia, Iraq and Afghanistan. How those are relevant, however, is anyone’s guess. You can’t justify an invasion by arguing that other countries, at other times and in other circumstances, have also invaded countries.

Each war has to be judged on its own merits. Even if one accepts that historical military interventions by Western countries were not justified, that would not justify an invasion of Ukraine, which posed no threat to Russia and took no aggressive action towards it, or anyone else.

Although other countries had no obligation to – and could not risk – getting militarily involved in the defence of Ukraine, Putin’s invasion has galvanised anti-Russian sentiment round the world (except in South Africa, of course, and except for Donald Trump, who thinks Putin is just brilliant).

The sanctions piled onto Russia are extensive and severe. Russia has been entirely cut off from the financial systems of much of the world, and the US has frozen its central bank assets. Air and sea links with Russia have been severed. Trade between Russia and the West is on ice. Sports tournaments scheduled to be held in Russia have been moved and sponsorships have been cancelled. Europe is determined to wean itself off Russian natural gas. Russians have been blocked from social media and gaming platforms, including from services such as Twitch, YouTube and OnlyFans, which for many struggling Russians were their only chance of earning an income.

Even Switzerland, the infamous protector of Nazi gold, broke its centuries-old policy of neutrality to freeze Russian assets, including those of Putin himself. At all levels of society and the economy, Russia has become a pariah state. Conversely, Ukraine has been receiving aid – in arms, money and even cryptocurrency – from far and wide. Ukrainians are earning the world’s admiration for their brave resistance to Russia’s violent onslaught.

The rouble, Russia’s currency, lost a quarter of its value after the invasion, the central bank more than doubled the interest rate, and long queues were seen at ATMs as a run on banks began. The sanctions will continue to bite for months, and years, to come and will flush Russia’s weak economy down the toilet.

Putin has gravely miscalculated. He has started a new Cold War, with his own weak country as the primary antagonist against a reinvigorated NATO alliance. His army is ripe for mutiny. Even with the best will in the world, Russia looks like getting bogged down for a long and costly occupation of a hostile land, as the Soviet Union did in Afghanistan during the 1980s.

Russia’s people, both the aristocrats and the peasants, will pay a heavy price for Putin’s rash invasion, which will fuel widespread discontent, including among the generals and politicians who surround Putin. Even if the takeover of Ukraine eventually succeeds, Putin has set his country back 30 years. The new Russia will be an outcast on the world stage. It will get to trade only with China, North Korea, South Africa, Zimbabwe and Venezuela. It will be isolated and alone.

Ukraine was once Russia’s ‘bridge to Europe’. Putin is burning it with gay abandon.

The only questions now are whether Putin can survive this politically, and whether, in desperation, he’ll reach for the proverbial big red nuclear launch button.