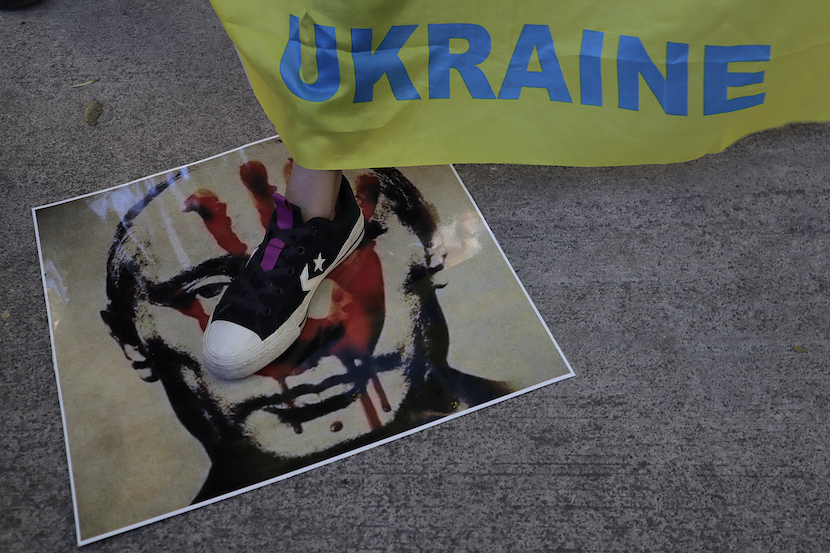 The Ukraine invasion is turning into a cliff hanger as Putin’s Hitlerian tactics and unpredictable nature – combined with an inexorable external and internal pushback – force him into a dangerous corner. This authoritative Financial Times analysis clearly shows how quickly the five-day invasion is unravelling as Putin anxiously fondles his weapons of mass destruction, commanding his often-unwilling troops onward. While it initially seemed he held all the cards and that the West was responding ineffectually, that’s changing fast as the ‘blitzkrieg’ slows in the face of fierce, heroic and unexpected resistance. Germany, with historic irony, is providing the Ukrainians with weaponry as the rouble plummets. There’s incipient, mini-United Democratic Front-style domestic pushback with some governing elite reportedly uncomfortable. Of course, there’s always some Western leader who’ll openly express admiration for Putin – the kind who needs limelight to breathe – and that’s our dear Donald Trump, who once called this ‘tsar’ a genius. Takes one maverick to know another. – Chris Bateman

Vladimir Putin is a “genius”, chortled Donald Trump. The former US president was speaking on the very eve of Russia’s invasion of Ukraine — and was lost in admiration for the “very savvy” man in the Kremlin.

So, what has this genius achieved? Four days into the invasion and Russian troops have failed to win the quick victory that Putin was counting on. Ukrainian resistance is much fiercer than the Russian leader anticipated, as Ukraine’s army fights back and the population mobilises. Captured Russian soldiers have been filmed complaining that they were told they were going on a training mission.

The international response has also been tougher, more co-ordinated and united than Putin bargained for. Russia is being cut out of the global financial system. Most European airspace has been closed to Russian airlines. There has been a historic reversal in German foreign and security policy — with Berlin finally sending weaponry to Ukraine and pledging to spend more than 2 per cent of gross domestic product on defence. The Nato alliance has been given a new sense of purpose. Russia is turning into a pariah, with even China failing to back it at the UN — it abstained instead.

Inside Russia itself, panicked citizens are rushing to withdraw money from banks. The rouble has plummeted in value, as has the Russian stock market. Small demonstrations against the war have broken out across the country, with the protesters swiftly arrested. Local celebrities, oligarchs and even the children of some Russian officials have condemned the conflict. Putin’s own officials look visibly uncomfortable as they take his orders in front of television cameras. The Russian official media have been left in the incredible position of denying the extent of the war, as it continues to insist that this is just a special military operation to support the breakaway regions of Donetsk and Luhansk.

Meanwhile, Ukraine itself is receiving a level of international admiration and recognition that is unprecedented since the country won independence in 1991. Volodymyr Zelensky, the Ukrainian president, once derided as a comic actor out of his depth, has won international acclaim for his inspirational leadership. His physical bravery on the streets of Kyiv is a marked contrast to the cowardice of Putin, who is too scared of a virus to allow his own officials within breathing distance. Calls for Ukraine to be put on a fast-track to EU membership are growing.

Putin has achieved all of this in a mere four days. Genius, sheer genius!

But a humiliated and cornered Putin is likely to become even more dangerous and ruthless. That was underlined on Sunday, when the Russian leader put his country’s nuclear forces on alert.

Unable to achieve the easy victory that he anticipated, Putin seems unlikely to back down. Pride, paranoia and his own personal survival point to the use of ever more radical and dangerous tactics. One senior western official predicted to me that “Putin will only dig in and this will get very ugly”.

Western security analysts have been warning of the possible use of thermobaric missiles in Ukraine — “flame-thrower” bombs which Russia has deployed in Chechnya and Syria and can cause huge loss of life. The nuclear threats that Putin is deploying, while clearly intended to intimidate, cannot be entirely discounted given his state of mind.

Since Putin himself seems highly unlikely to retreat, there appear to be few peaceful ways out of this conflict. One small ray of hope is offered by the announcement that Russian and Ukrainian negotiators have agreed to meet at the Belarus border. But there is, as yet, no sign that Putin is prepared to back away from his maximalist demands that would involve further dismemberment of Ukrainian territory and the de facto end of the country’s independence. The fact that the man originally nominated to lead Russia’s delegation is a junior former official, noted for his extreme nationalism, is not a promising sign.

It may be that the only real route to peace would be for the Russian governing elite somehow to force Putin out of power. The videos that their leader has released showing him humiliating members of the security establishment, as he compels them to endorse his policies, are meant to demonstrate his total authority. But they also highlight misgivings within his own inner circle.

However, the current Russian system is less collective than even the post-Stalin Soviet Union. High-ranking Soviet officials were able to force Nikita Khrushchev from power in 1964. But Putin rules more like a pre-Soviet tsar. It is hard to see how internal opposition to him, within the government, can mobilise.

It is possible, however, that as the human and economic costs of the war mount it will become more difficult to contain the public protests against the conflict. Russian troops within Ukraine may also become demoralised as they take losses and are ordered to use brutal tactics against civilians. Eventually some combination of elite anxiety, military failure and popular discontent could force the Russian leader out of office. But — for now — the danger that Putin poses to Ukraine, Russia and the world is only growing.

Video: Russia’s invasion of Ukraine: what next? | FT Live