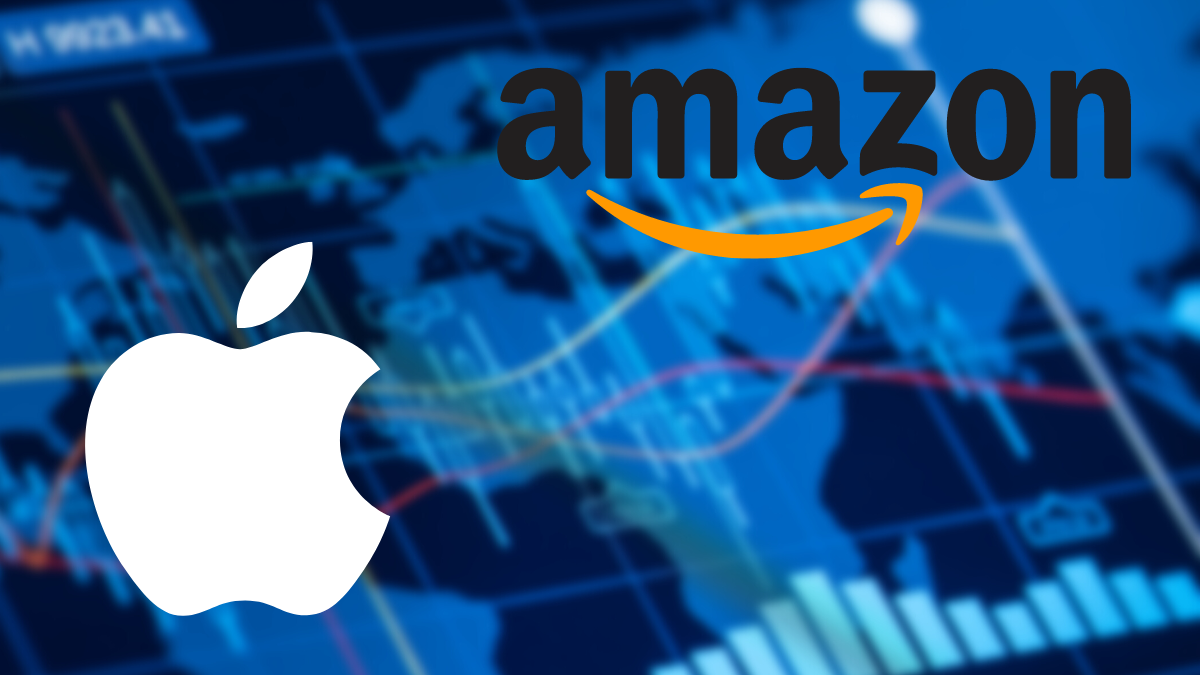 Both Amazon and Apple have faced constraints caused by the pandemic or its direct after-effects. Amazon faced a spike in demand for its online retail service in 2020 and 2021 due to people being stuck at home and unable to physically head to stores to buy their goods. Amazon did not have the infrastructure to keep up with this demand and had to invest heavily in building new warehouses and expanding their business. However, with Covid-19 restrictions easing, the demand Amazon once faced has subsided and the online retailer’s expenses are higher than the revenue being generated, as customers are no longer forced to buy from online retailers and can now head into physical stores. Apple is struggling with supply chain issues caused by severe lockdowns in China, where their devices are manufactured. Both companies are also dealing with the pressures caused by inflation.  Apple faced an almost 11% decline in profit. However, pre-market trading for both companies has signalled positive expectations from investors as Apple’s stock price shot up by over 2.5% and Amazon’s by over 12%. More in these articles from the Wall Street Journal. – Ross Sinclair

Amazon.com Inc. reported slowing sales and a net loss for the second straight quarter, as strength in the tech giant’s cloud-computing business was outweighed by continued weakness in core retail operations suffering from the aftereffects of a pandemic boom.

Revenue for the tech giant in the latest period increased by 7.2% from a year earlier to $121.2 billion. That was a hair slower than the 7.3% rise in the first quarter, which had marked Amazon’s slowest growth in about two decades.

Amazon’s loss totaled $2 billion in the quarter, compared with a profit of $7.8 billion a year ago. The loss came partly because of the company’s stake in electric-vehicle maker Rivian Automotive Inc., whose valuation has plunged this year, causing Amazon to book a pretax loss of $3.9 billion in the second quarter. Amazon’s North America division, which houses its core online retail business in its biggest market, reported a third consecutive operating loss, though it narrowed from the prior quarter.

Amazon’s net loss defied expectations for a moderate profit in the period, but its revenue grew faster than analysts anticipated, helped in part by the continued strength in cloud-computing and the services it provides to other vendors that sell on its site. Shares were up more than 13% in after-hours trading, hitting their highest point in about three months—though still down sharply from the start of 2022.

Amazon and other tech giants that thrived through the pandemic—as more life and work shifted online—have consistently reported slowing growth in recent days, though in some cases not as much as investors had feared. Inflation is pushing up costs and crimping consumer spending power, and global uncertainty around issues running from Russia’s war on Ukraine to the persistence of Covid-19 has made individuals and businesses more cautious.

Amazon executives said that surging inflation is among its biggest challenges now but that the company has been able to pare costs anyway to help deal with its shifting circumstances.

The shortfall in the three months through June followed a loss in the first quarter of 2022 that was Amazon’s first in seven years. Mr. Jassy, who took the role a little over a year ago, is now shepherding the company through one of its worst stretches for financial performance in Amazon’s history.

Like other companies, Amazon is rethinking its hiring due to inflation and the economic environment, Brian Olsavsky, Amazon’s chief financial officer, said on a call with reporters after the quarterly report. “I don’t think you’ll see us hiring at the same pace we did in the last year or the last few years,” he said, but added that the company is still committed to hiring engineering positions, and in its cloud-computing and advertising divisions.

Amazon’s number of employees—which had more than doubled during the pandemic—slid about 6% during the second quarter to 1.52 million.

Mr. Olsavsky also said Amazon has slowed plans to expand its operations through next year, and plans to shift capital expenditures to cloud-computing and away from the company’s retail business.

The cloud-computing and advertising businesses have been reliable growth engines for Amazon. Revenue for Amazon Web Services, the largest cloud-computing company by market share, grew 33% to $19.7 billion in the second quarter.

Amazon’s advertising business, for which the company recently began breaking out financial data, grew 18% to $8.8 billion in the quarter.

The company said it expects its operating income for the third quarter to be between $0 and $3.5 billion, compared with $4.9 billion in third quarter 2021. It expects sales between $125 billion and $130 billion.

Amazon’s core e-commerce business has been struggling with high costs and slowing growth in consumer demand as customers return to in-store shopping. Amazon’s online stores segment, which includes the bulk of its e-commerce operations, experienced a 4% decline in sales for the period. Amazon said revenue would have been flat in the segment if not for the impact of the stronger U.S. dollar, which reduces the value of overseas revenue.

The company also reported a 9% rise in sales of logistics and other services it provides to third-party vendors, a slight acceleration from earlier this year.

During the throes of the pandemic, Amazon notched record sales as its logistics network struggled to keep up with the influx of orders. At the time, the company decided to aggressively build out a network of warehouses, sortation centers and other expensive infrastructure that required significant capital investments. Now, with demand cooling as consumers head back into stores and spend money on travel and other experiences, Amazon has had to pivot.

To curb costs, the company has worked to more aggressively sublease millions of square feet of excess warehouse space, defer construction of new facilities and find ways to end or renegotiate leases with outside warehouse owners while thinning out its hourly workforce through attrition.

Other retailers that benefited from pandemic-era shopping are also working through a buildup of inventory as customers spend money in stores and on experience. In addition to a mismatch between supply and demand, they are also coping with record inflation that is eating into customers’ discretionary income as they deal with higher costs for everyday goods such as gasoline and groceries.

Amazon’s pretax loss from Rivian in the second quarter narrowed from the $7.6 billion hit it reported in the prior period. Amazon in the fourth quarter of 2021 had registered a $12 billion gain from the investment in the auto maker, which went public last year.

The better-than-expected results for the quarter ended in June followed a pattern of tech companies that posted a drop in profits but managed to assuage investor concerns about their strength in uncertain economic times.

Investors were encouraged by Apple’s results even as they continue to pay close attention to the potential effect of a strong dollar, inflationary fears, chip shortages and Covid-19 precautions in China.

“We are seeing some pockets of softness here and there,” Tim Cook, Apple’s chief executive, said in an interview Thursday. “But in the aggregate, we expect revenue to accelerate in the September quarter as compared to the June year over year performance.”

Apple shares rose by more than 3% in after-hours trading. Amazon.com Inc. shares were up by more than 12% after hours after the company said revenue was up about 7%. Earlier in the week, Microsoft Corp.  and Google-parent Alphabet Inc. reported April-through-June results that fell short of Wall Street expectations but showed investors that the companies are well-positioned to weather a recession.

Apple on Thursday reported that profit fell to $19.4 billion, the worst quarter since the July-through-September period in 2020 ahead of the 5G-capable iPhone launch. On a per share basis, the Cupertino, Calif., company’s profit fell to $1.20 from $1.30 a year earlier. Analysts surveyed by FactSet, on average, predicted earnings per share of $1.16.

Revenue rose 1.87% to a new fiscal third-quarter record of about $83 billion from $81 billion a year ago. Analysts had predicted a 1.7% rise.

IPhone sales, which are Apple’s biggest driver of revenue, rose 2.8% to a fiscal third-quarter record of $40.67 billion, while analysts had expected a 2.5% drop. Sales of iPad tablets, Mac computers and wearables were affected by supply constraints, Mr. Cook said.

“There is no obvious evidence in our data that there is macroeconomic effect on iPhone sales,” Mr. Cook said. “On iPad and Mac, frankly, we didn’t have enough data from a supply point of view to really test the demand.”

Apple is seeing signs of the economy affecting sales in its wearables category and among some services, such as ads, he said. The company expects supply constraints to improve in the current quarter compared with the previous one.

“As we look to September, eyes are on FX [foreign-exchange] impact and any signs of a demand slowdown ahead of the iPhone 14 launch,” longtime Morgan Stanley analyst Katy Huberty wrote in her final note about Apple to investors, after being promoted to a new role.

In late 2020, Apple introduced iPhones with 5G capabilities that were touted as offering faster internet speeds to improve gaming and downloads, helping spark renewed interest in the gadget and fueling a record fiscal 2021 profit of $94.7 billion. Analysts are predicting iPhone profit for fiscal 2022, which ends in September, will be near $100 billion after a strong first half.

China, which has seen strict Covid-19 shutdowns, was expected to be a drag on Apple’s results after helping fuel record growth. Apple had warned in April that Covid-related supply disruptions around Shanghai and silicon shortages would hurt the company’s inventory and hinder sales by between $4 billion and $8 billion. Chief Financial Officer Luca Maestri also had warned that foreign-exchange rates and paused sales in Russia following the war in Ukraine would also limit growth.

On Thursday, Mr. Cook said those constraints were “slightly less” than what was predicted.

Other U.S. companies with heavy exposure to China have already shown how those shutdowns have hurt their businesses. Tesla Inc. for example, last week reported its first sequential decline in quarterly profit in more than a year following an extended shutdown at its Shanghai assembly plant, while General Motors Co.’s  China operations helped send profit down 40% in the quarter.

In recent days, Apple has taken the unusual step of discounting iPhones in the China market.

Goldman Sachs estimates that iPhone China shipments improved in the month of May compared with April, when they fell 39%. “Our checks suggest an even stronger sales momentum in June as lockdowns were further reduced, likely driving realization of pent up demand,” Rod Hall, a Goldman Sachs analyst, wrote in a note to investors this month.

Mr. Cook said the company is seeing inflationary costs in wages, logistics and certain silicon components. The company finished the previous fiscal year with 154,000 employees, according to a regulatory filing.

“We are making deliberate decisions about where to invest our money, but we’re continuing to hire, but we’re just doing it in a very deliberate way,” Mr. Cook said in the interview.