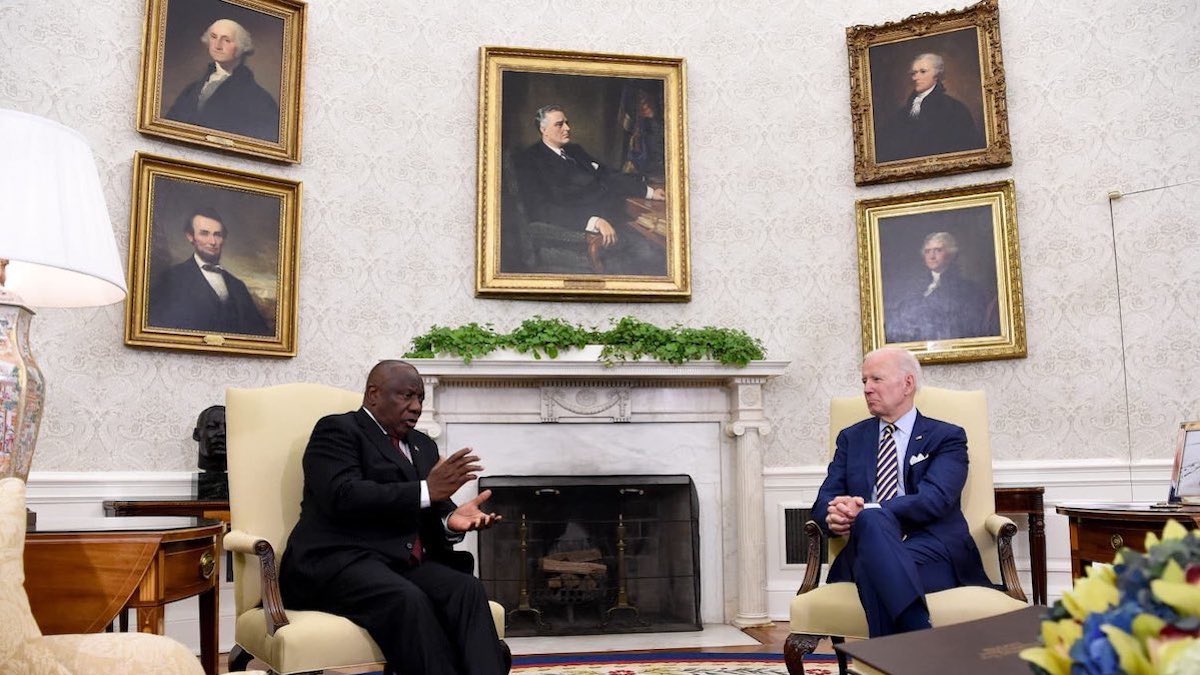 In the statement below, the Presidency documents the many areas of national, regional and global importance discussed by South African President Cyril Ramaphosa and the president of the United States, Joe Biden, in their working visit last week. Trade, investment, global peace, health, as well as climate change and the just energy transition were touched on, with concern raised by the South African president in one area particularly: the Countering Malign Russian Activities in Africa Bill. South Africa’s government has chosen to be neutral on the Russia-Ukraine war, a stance that has upset many people in South Africa and in other countries. Persuading South Africa to change its mind on the Ukraine-Russia war must have been difficult for Biden – it does not look as if South Africa can be convinced. – Sandra Laurence

President Cyril Ramaphosa has concluded his official working visit to the United States at the invitation of President Joseph Biden and President Cyril Ramaphosa. The two leaders deliberated on a range of critical issues of national, regional and global importance during their bilateral meeting, where trade, investment, global peace and stability, health, as well as climate change and the just energy transition were discussed.

On trade and investment, there was agreement on the need to create a more attractive environment for American companies to invest in South Africa, where an estimated 600 US companies are already doing business in a range of sectors.

A joint task force on trade and investment will be established to expand bilateral economic ties. In 2023 South Africa will host the African Growth and Opportunity Act (AGOA) Forum which will map the next phase of Africa-US trade.

President Ramaphosa expressed South Africa’s concerns about tariffs levied by the US on South African steel and aluminium products, which South Africa views as unfair and punitive.

President Ramaphosa emphasised the need for an urgent end to the Russia-Ukraine conflict and and emphasised the leadership role of the United Nations Secretary-General of António Guterres can provide in leading a peace process.

Health and capacitation of health systems

President Ramaphosa expressed appreciation for US support on health services capacitation and future pandemic preparedness. This includes the continued support for the PEPFAR programmes to combat HIV/Aids and Tuberculosis, and the support during the COVID-19 pandemic.

President Ramaphosa applauded the leadership role played by President Biden in assisting developing economies to strengthen their health systems and for support on the WTO TRIPS waiver on vaccine manufacturing.

Africa’s representation in key multilateral institutions was highlighted by President Ramaphosa. This includes the proposal for Africa’s admission through the African Union (AU) into the Group of 20 countries (G20).

“The absence of representation of 1.3 billion people from Africa in the United Nations Security Council remains a blight in the global democratic order,” said President Ramaphosa. Both leaders agreed on the need for broader reforms of the United Nations.

Building capacity of the state

President Ramaphosa tabled a proposal for a partnership with the US in supporting South Africa’s efforts to develop public servants, especially women. In this regard South Africa’s National School of Government will work closely with leading American institutions in designing training programmes for South African public servants.

Ahead of the meeting with President Biden, President Ramaphosa met with the United States Vice President Kamala Harris at her official residence, where they discussed women’s empowerment, health and security, partnership on technology and space exploration.