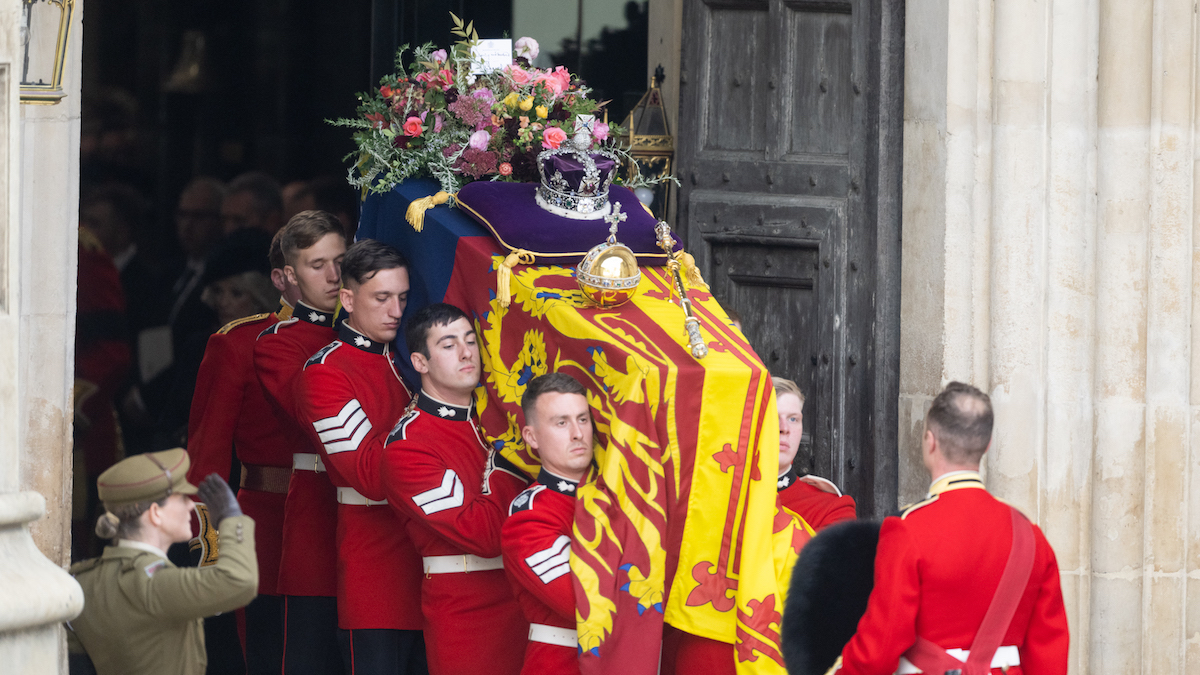 At the state funeral for Queen Elizabeth II in Westminster Abbey on Monday morning, the Archbishop of Canterbury, Justin Welby, said: “People of loving service are rare in any walk of life. Leaders of loving service are still rarer.” The funeral mixed royal tradition with poignant personal touches to reflect the queen’s life. The hymns included “The Lord’s My Shepherd,” which was sung during the queen’s marriage to Prince Philip in Westminster Abbey in 1947; and the flowers in the wreath on her coffin came from the royal gardens and included rosemary for remembrance and myrtle from the original plant used in her wedding bouquet. As she returned to Windsor shortly before noon, there was a two-minute silence across the nation. London’s red buses were ordered to pull over and shut off their engines, and flights from Heathrow Airport were cancelled to ensure no aircraft noise. Her Fell pony, Emma stood fully saddled on the grounds of Windsor Castle to watch Queen Elizabeth‘s procession as her coffin made its final journey to St George’s Chapel, as did her corgis, Sandy and Muick. This article was first published on The Wall Street Journal. – Sandra Laurence

Nation puts life on pause to honor its longest-serving monarch

By Max Colchester and David Luhnow

LONDON—Britain bid a final farewell Monday to Queen Elizabeth II, the country’s longest-serving monarch, during a historic funeral and solemn military procession that drew hundreds of thousands of people to London and Windsor Castle and was watched by millions around the globe.

The state funeral, which paid tribute to her deep Christian faith and life of service, closed the chapter on the second Elizabethan age, a reign that lasted 70 years and saw an era of radical change for Britain as its empire was dismantled. The queen, however, remained a hugely popular head of state who gave people both in Britain and abroad a valued sense of continuity and proved a powerful symbol of the country’s identity.

During six hours of tightly choreographed pageantry, the nation and hundreds of dignitaries from across the world paid tribute to her reign. It was the first British state funeral since Winston Churchill’s in 1965 and one of the biggest set-piece events in the nation’s history, as her coffin was taken in a procession, on foot and by hearse, from a state funeral in Westminster Abbey in central London to its final resting place in Windsor Castle.

After a committal service in St. George’s Chapel in Windsor, her crown, orb and scepter—symbols of a monarch’s power—were removed from her coffin and placed on the altar. The Lord Chamberlain, the most senior official in the royal household, then broke his wooden wand of office over the coffin to symbolize the monarch’s passing. The Dean of Windsor read a Christian prayer, “Go forth upon thy journey from this world, O Christian soul.”

The day’s proceedings slowly shifted from the public to the private. Early on Monday, officials ended four days of the queen’s coffin lying in state, which allowed an estimated 750,000 Britons to say farewell to a beloved monarch. The public again got to send off the queen through several public processions later in the day before the coffin’s arrival at Windsor Castle.

The proceedings ended later on Monday with a private family ceremony, the only part of the proceedings that wasn’t broadcast, as the queen’s coffin was lowered into the ground next to her late husband, Prince Philip.

The state funeral in Westminster Abbey on Monday morning mixed royal tradition with poignant personal touches to reflect the queen’s life. The hymns chosen by the queen included “The Lord’s My Shepherd,” which was sung during the queen’s marriage to Prince Philip in Westminster Abbey in 1947. The choir also sang a short anthem, “O Taste and See How Gracious the Lord Is,” which was composed by Ralph Vaughan Williams for Queen Elizabeth’s coronation in 1953.

President Biden, French President Emmanuel Macron and Canadian Prime Minister Justin Trudeau were in attendance, along with the king of Spain, the sultan of Oman and Japan’s Emperor Naruhito and Empress Masako.

As the service was ending shortly before noon, there was a two-minute silence held across the nation. London’s red buses were ordered to pull over and shut off their engines. Flights were canceled from Heathrow Airport to ensure no aircraft noise.

When the moment of silence ended, those in the service rose and sang “God Save the King,” the first time it had been sung in the abbey for more than 70 years, leaving the late queen’s son, King Charles III, appearing tearful. It gave way to a more somber note as a lone piper played “Sleep, Dearie, Sleep.”

After the service, the queen’s coffin was marched in procession to Wellington Arch, near Hyde Park Corner, to the steady beating of a drum and funereal marching music. King Charles III and his family followed on foot as minute guns fired from Hyde Park and Big Ben tolled.

The coffin, draped in the royal flag, was then loaded onto a hearse and driven to Windsor Castle, about an hour west of London, and the queen’s final resting place. Once at Windsor, the coffin was again marched in procession along the “long walk,” a mile-long stretch of road strewn with flowers that leads to the castle where the queen was buried in the King George VI memorial chapel. The queen’s two corgis were among those who awaited her arrival.

The gathering was the crescendo of a 10-day mourning period for the nation, which went off without a flaw. Across the U.K., giant screens were set up in public spaces for people to view the occasion. Many cinemas showed it, too. The nation largely shut down in the hours around the funeral, with many restaurants and shops closing their doors.

Outside the abbey, hundreds of thousands of people crowded central London to pay their respects under leaden skies, corralled by the largest-ever policing operation for a single day in the capital. Around 10,000 members of the military took part in the various processions.

Many slept overnight near Buckingham Palace to secure a spot from which to view the cortege. “It’s a once-in-a-lifetime opportunity to pay our respects,” said Sim Madgewick, who brought his family to London from Essex.

They arrived on Sunday afternoon and joined the long line to see the queen lying in state at Westminster Hall, emerging at 2 a.m. on Monday morning, snatching a few hours sleep on a stationary train at nearby Charing Cross station, and heading off again to Buckingham Palace at 6:30 a.m. to get a place to see the funeral procession. They were fortified by plenty of tea and bags of sweets and chocolates.

The minutely scripted events, which have been decades in the planning and signed off by the queen herself, began Monday morning when the queen’s coffin was taken in a procession from Westminster Hall, where it spent the past four days lying in state, to Westminster Abbey, the site of the coronation of nearly every English and British monarch dating back to William the Conqueror in 1066. Church bells tolled 96 times, a toll for each year of the monarch’s life.

Late Sunday, President Biden paid tribute to the late monarch. “Our hearts go out to the royal family. King Charles and all of the family. It’s a loss that leaves a giant hole and sometimes you think you’ll never overcome it,” he told reporters. He said he told King Charles III that the queen will be with him “every step of the way, every moment.”

King Charles said he was “deeply touched by the many messages of condolence and support we have received from this country and across the world.”

At the abbey, King Charles, dressed in a Royal Navy tailcoat and joined by his wife, Camilla, the queen consort, watched over the coffin. Behind them sat his son, Prince Harry, with his wife, Meghan, Duchess of Sussex. Across the aisle, heir to the throne, Prince William, sat with his wife and children.

“With gratitude we remember her unswerving commitment to a high calling over so many years as Queen and Head of the Commonwealth,” said David Hoyle, the Dean of Westminster. Outside, the crowds stood silently in the Mall leading to Buckingham Palace listening to the service as it was broadcast through speakers.

By late afternoon, life began to resume in Britain as supermarkets and bars largely reopened their doors. But the royal family will remain in mourning for their former queen for a further seven days.

“Her majesty famously declared on her 21st birthday broadcast that her whole life would be dedicated to serving the nation and the commonwealth,” said Archbishop Welby. “Rarely has a promise been so well kept.”

Julie Steinberg contributed to this article.