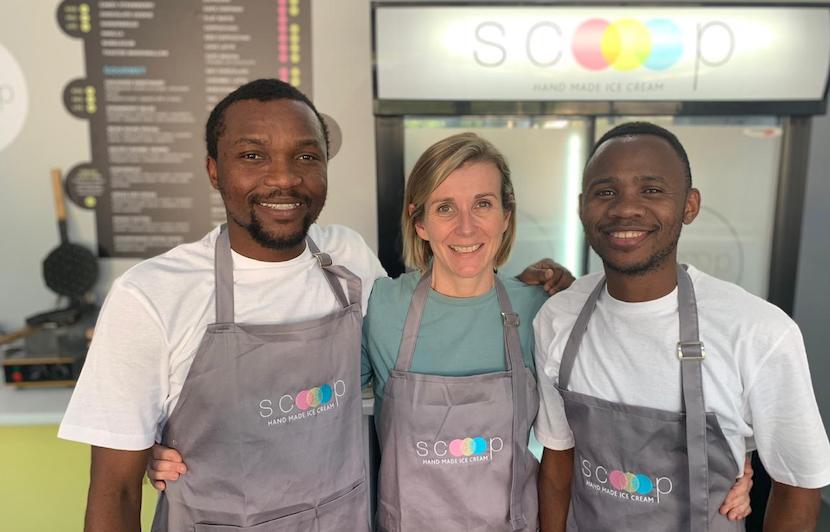 When a woman locates herself with her daughter to South Africa after a successful career opening gastropubs and Wagamamas in London; she is bound not to sit still for long. She is Amanda Maidman who found herself in Ballito looking for an idea for a business when her daughter suggested ice cream, Scoop was started. Like everything else Amanda has tackled in the restaurant business, she has jumped in boots and all and now Scoop is the place to go to and buy delicious homemade ice cream in KwaZulu-Natal, and she has gone from home kitchen to opening up a factory. Maidman believes in empowerment through work and she has a team consisting mostly of people who were formerly out of work. Amanda told Biznews that she has her eye on more than two Scoops. –  Linda van Tilburg

Amanda Maidman initially thought of starting a cocktail bar or restaurant but was nervous about the investment it would need and whether she would be able to get “enough bums on seats.” So, she decided to start her ice cream business five years ago in her kitchen with the help of a domestic worker. She says she wanted to celebrate local KwaZulu-Natal produce as it produces mangoes, macadamia nuts, pineapples, citrus fruits and ginger.

Amanda says she took some of the ideas of gastropubs in England where she worked in the 2000s, which source local seasonal ingredients and change menus all the time. This, Maidman says, worked really well. What Scoop gave their customers, was ice cream not seen before in the province. She says KwaZulu-Natal was a little bit behind the food industry of the rest of the country five to six years ago. Masterchef Australia, broadcast in South Africa made “quite a big impact actually so people are a bit more forward thinking now with flavours.” 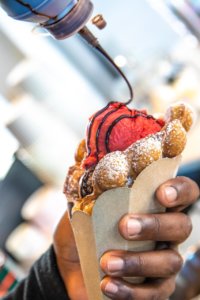 Initially she found it difficult to source good quality ingredients and started introducing Madagascan vanilla and macadamias farmed locally. The Jersey milk came from Khulisana Farm at Tweedie in KZN. One of the big sellers at Scoop is vanilla ice cream with salted macadamia, “which blew people’s minds.” Maidman says she also uses 70% Belgian chocolate which she melts into a custard base, which many people in the area have never tasted before. Other specialities are pineapple and ginger sorbet, and ginger, honey and lemon ice cream.

To cater to local Indian tastes and after prompting from food writer, Erica Platter, Scoop started making curry leaf ice cream, which grew abundantly in Erica’s garden. Scoop also features cardamon in an ice cream called Indian Summer on its menu. A real winner proved to be an ice cream reminiscent of a day at the movies, salted popcorn ice cream. They have also expanded to waffles in one of their sites. The original Scoop was on a litchi farm in Salt Rock and its litchi sorbet is so popular that it is not only available when litchis are in season. Scoop also makes about 500 ice cream cones by hand a week.

The people who work at Scoop have been handpicked by Maidman and many have been disadvantaged but they have put themselves through the courses of Work 4 A Living. She is a strong supporter of empowerment through employment. For R100, Work 4 a Living teaches people job readiness skills, which she found many of the people who came to work for her, did not have. She says the R100 is a huge commitment for them added to the taxi fare of getting to the classes for people who did not have any income.

The people who were willing to make that sacrifice were the ones that she wanted in her business. Every single one of the 16 people who now work for Scoop came through the course, because she says, they wanted something better for their lives and they are taught to be committed to a boss. Maidman says, if your job is to clean tables, you are taught to clean it in the best possible way, so you get noticed and you are promotable.

Maidman says she found that the people she employed were lacking the skills needed even for basic jobs. Many of the youngsters have been raised by their grandparents. “The two girls that I started in the kitchen at home did with not know what a gram or a kilogram was, or that a kilo was a thousand grams.” This meant that she had to adapt her recipes to make sure they were able to deal with them.

A former car guard, Dieudonne Mukuba from the Congo met Amanda when she gave him lifts to the centre that he worked at. When he lost his job he asked her if she knew about an opportunity and she referred him to Work 4 A Living. After completing the course, Maidman offered Dieudonne a temporary job. From there he became permanent and opened up Scoop’s new store two years ago. After completing a computer course he was promoted to running the Scoop factory. His brother-in-law Serge Bahse runs the lifestyle centre and they have become her right and left hand. A former assistant Sharon Xulu now runs the Ballito store.

So, what is next for Scoop? Maidman says she has done five years on her own and her husband works full time and they both also home school their children. Her vision was never to only have two Scoops; in the immediate future she is thinking of ten stores and Amanda says “the next logical step is probably to get a partner involved or to look at franchising.”