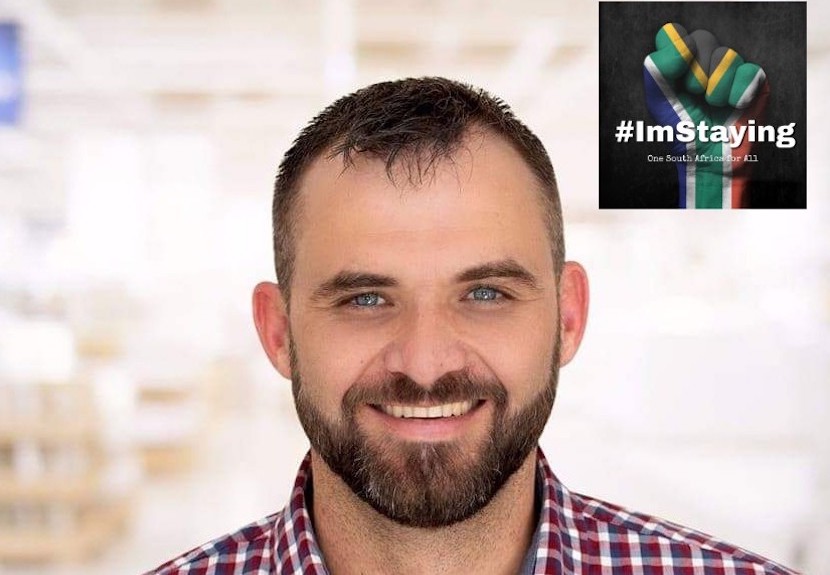 The pessimism in our national psyche has reached epic proportions and yes we do have real issue to worry about; Eskom, the economy and polarisation fuelled by political parties like the Economic Freedom Fighters. The feeling of being “gatvol” is pervasive and is only lifted in moments when we cheer the Boks on to the semi-finals of the Rugby World Cup. It has prompted an estate agent in Cape Town, Jarette Petzer to start a movement on Facebook, called #ImStaying. The group is not about, “well we have no-where to go so might as well make the best out of it “. It is about bridging political strife, racism and cultural divides and positivity. And it has clearly tapped into something that South Africa feel is lacking as the numbers on the Facebook group keeps on growing by the day and could soon reach a million. Jarette spoke to Biznews about his Facebook group and his plans for the future. – Linda van Tilburg

So, what happened was that I created a video which picked up the attention of a few people and one of them recommended that I start a group. That’s basically what happened. I started the group, but it was all as a result of feeling a little disillusioned with the state of affairs in South Africa in terms of politics and xenophobia and crime rates and all that stuff. And I just found myself becoming very complacent and very negative towards my country and created something, a little platform that basically spoke to our attitudes and made me a little bit more mindful of the words that I used because you know words are very powerful. So, maybe a little bit more cognisant of the words that I used and the thoughts that I had allowed myself to have and the way that I conducted myself and treated other people. And that was basically it. You know… those small adjustments set this whole thing in motion.

So, #ImStaying is not only, I’m staying in South Africa, I’m committed, I’m not leaving the country? It’s a far broader philosophy than that?

When I came up with the name, there was a lot of Plan B going on in South Africa. You know all of the big companies sort of jumping on this. Get your Plan B quickly before the country sinks, so #ImStaying was sort of a counter to that. But I didn’t expect it obviously to go to where it’s grown to now and it’s become all- encompassing. You know I think more than what the name entails; it’s what it stands for, what it represents, it resonates with so many people

Well tell us about the campaign on Facebook. How many people have signed up to it?

Sure. So we are on; I think it is just short of seven hundred and fifteen thousand people.

It’s growing rapidly. Every time we do any sort of press release or any sort of public engagement; we see the numbers pushing more aggressively. We are growing between I would say 15,000 to 30,000 depending on the day. We are probably the hottest thing in the press right now, which is helping the growth rate, you know. The media is doing a wonderful job of covering us and we’re talking to a lot of radio stations and we’ve been speaking to a lot of reporters and getting our story out there, so that obviously helps.

And what do you say about some of the negative feedback?

I don’t concentrate on the negative feedback. I mean our whole group is about positivity and trying to create a positive narrative. Now, I know there’s been a lot of comments made about group. I would say that a lot of it is naivety because if you spend any sort of time on the group; you’d see that it’s about people coming together. It’s about people sharing stories. It’s about people learning each other’s cultures and the playing fields are level because on the platform;  I have no idea where the people come from; how much money they have or what jobs they do. And it’s just a bunch of people, human beings, you know, completely level playing fields and all of us trying to share in this moment of peace and tranquility and love and respect and harmony and that’s what I see, that’s what I think we should be paying attention to.

Is it a similar concept to Ubuntu?

You know, I think everything that we’re doing is very much Ubuntu.

One of the biggest problems we’ve had in South Africa is and this is what the group has actually helped us to realise on a grand scale, is that racism, sure has been an issue but it’s not just racism. It’s actually a cultural divide which is a major issue. We don’t know each other’s cultures; we don’t understand the things that make us so unique and so different from a cultural perspective.

And this group is really, you know, it’s cast out the shadows and allowed us to see in depth these different cultures that we have that make up South Africans, how different they are. And I think what that’s doing, is giving us a level of understanding and with understanding comes tolerance. And with tolerance comes respect and so on and so forth. And we see it happening on the ground. We’re seeing people adjusting, changing their attitudes and we are seeing a lot of misperception leaving and being lifted.

There was something similar on social media earlier – why do white people act like this and black people would bring out the funny elements of white culture or European culture. Is there similar banter on your site?

There is, but we’re very careful with that sort of thing because those sorts of things have a tendency to go awry because you’ll always find there’s one or two people that are going to ask the question that is charged. And when you start asking a loaded question that starts to create contention. So, there’s a lot more about people talking about themselves and people relating or people engaging than it is about pointing at another specific race. Now, I’m really trying to get us away from labels; we seem to have this mental block about not being able to describe or to talk or relate to something unless we can put a label on it. I need to know what job you do, what you do for a living in order for me to treat you with respect; it is quite strange.

We feel like, we can’t describe another human being unless we specify the colour of their skin or a specific feature about them. I look at my child for these lessons actually because our kids don’t seem to have these problems. Our kids don’t seem to have these challenges that we have as adults to be able to just get along,  to forget all these little things that define us, put us into little boxes, you know, keep us all distant. We are the ones that have the problem; it’s us that has the issue. I made a post about it a couple weeks ago and I said we really need to start learning from our children, spending more time watching our kids and seeing how they engage with one another because there are lessons there.

Do you moderate the site to make sure that the trolls don’t get onto it?

Ja, there’s a lot of moderation. We’ve got about 60 moderators at the moment that help us review and check all content before it goes through. And there’s a lot; you can imagine. There’s a ton of people that tried to come on and if they’re not trying to troll, then they are trying to have these tough discussions and that for us, is not really what the objective of the group is. So, we have a very staunch moderation system in place.

And the  people working for you on the website; are they all volunteers?

Yes, they’re all they’re all volunteers. All the moderators at this stage have not received one cent. They haven’t received any moneys. They’ve been doing this fully at their own expense and using their own time which is really beautiful to see how many people got behind this. It’s a service to our country at the end of the day.

Are there plans to expand this in any way?

Yes, we are. We’ve just launched a public fund which is controlled by Back-a-Buddy. And we’ve opened up the fund in order to raise capital for business initiatives and those business initiatives will be aimed at things like informal businesses, micro businesses, entrepreneurs that are looking to start businesses; businesses that are looking to expand etc. So, that’s really the idea in terms of where we want to go. We know that South Africa’s got a major crisis when it comes to employment and one of the ways to address that is to create ownership of businesses, so that those businesses can help employees and become a participant in the economy and help us to alleviate some of the burdens that are upon us right now as a country.

So, next year will be launching of our first event which is going to be an interactive event. We have local artists promoting our local talent and also using the event itself as a business platform for small businesses and micro businesses. So that’s really our plan. We are heavily geared towards trying to create jobs.

I’m just a normal South African. I’m just a guy. I come from the south of Johannesburg; I grew up on a farm where we used to milk cows when I was a kid. So, you know I’m just a simple guy and you know, I was in real estate for some time. I’ve got a beautiful daughter who’s 11-years old and I live in Cape Town and I’m just very passionate, very ,very passionate about my country. So that’s pretty much Jarrete Petzer, just a normal bloke.