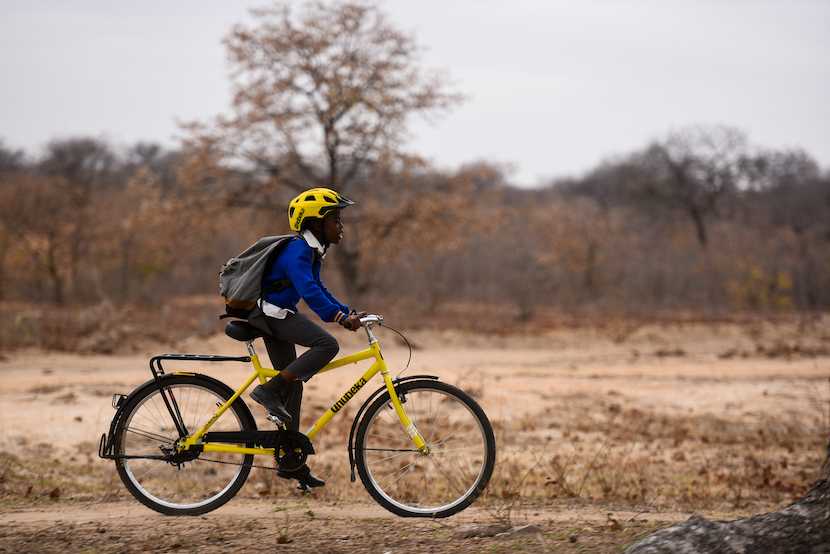 Qhubeka has a noble mission – to put every school kid in the country on a bicycle. In a country where it is estimated that the average pupil spends two hours a day walking to school and back home every single school day; it means that kids have more time to play, use less energy and are less exposed to danger. This is particularly important in poverty-stricken areas of South Africa. Their programme is also geared towards care workers and the NEETs – young people not in education, employment or training. The charity has starting the manufacture of their own bikes to increase the number of bicycles that they hand out and has extended their platform overseas to raise funds for the charity. They have also teamed up with the Dimension Data cycling team to help to raise awareness of Qhubeka. They are about to hand over their 100,000th bicycle and as Anthony Fitzhenry explained to Biznews in an interview they want to expand the programme. – Linda van Tilburg

In South Africa there are 12 million people at school every day. And of those eight million walk to school and that’s the big problem in this country which I think is reflected pretty much throughout the rest of Africa. Only 35 out of every 100 people who start school leave school with a school leavers certificate and a lot of that is because of the hardships that they have to face.  So many children have to be at school an hour before school starts because they don’t have a working or a homework environment at home.

So, we think our job in South Africa in particular, is to put eight million children on bicycle. Bicycles is basically quite an amazing piece of technology; it is four times faster than walking. So, for instance if you’re walking a distance for an hour that same distance can be covered in one quarter of the time… in 15 minutes. The other thing in South Africa is that six million children live below the food poverty line and walking takes five times more energy per hour than biking. So, if you had to walk for an hour you’d use roughly 500 calories whereas if you rode a bike; you would only use 100 calories,. So, basically,  if you take the time period that it shortens and the amount of calories you burn;  bicycles are  more than 10 times more energy-efficient than walking.

So, our programmes are focused mainly on schools. Our philosophy and our methodology is going to school and making sure that there is no child without a bike. Every child gets a bicycle. And then to support that, we train bicycle mechanics and with the  65 kids that fail school; we try to help them by focusing on community policing and on job creation. And then the final area we focus on, is giving the older adults access to health care. And in South Africa there are about 100 000 community based nurses that walk every single day and with a bicycle they can see roughly twice as many patients as they would if they were walking. And basically; those are the three things we focus on. 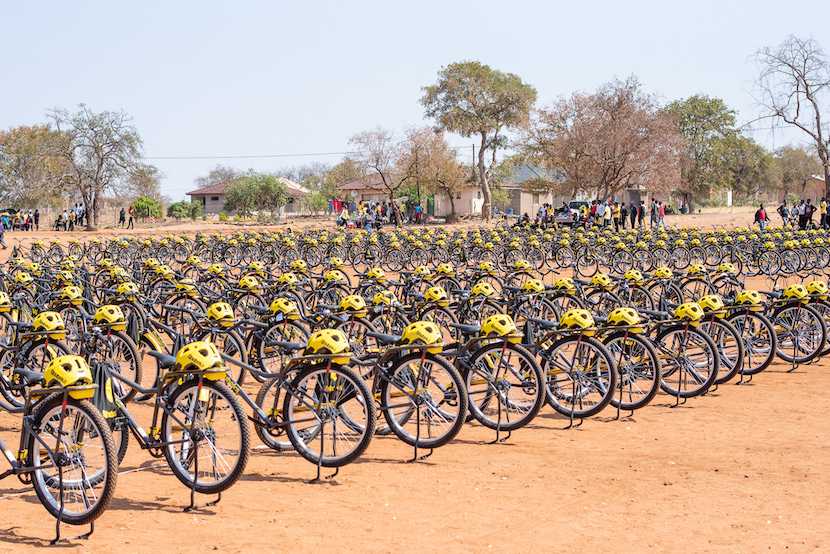 We’re speaking to you today because you are about to hand out your 100 000th bike. So, the campaign has obviously been successful. In which areas of the country has it been rolled out?

So, the success is relative. And this year we’ll probably do 20 000 bikes.

And if we look at the entire problem of 8 million children that walk; if we continue at this rate of 20000; we’ll never address the problem. We are now manufacturing bicycles in South Africa and have just produced 10 000 manufactured bikes in South Africa. And we are looking forward to doubling our numbers on  an annual basis. To resolve the problem in in South Africa alone we probably need to do 200 000 a year. And that’s what our ambition is.

I’ve seen the name at the Tour de France; so you’ve managed to make your campaign global?

In other words, get awareness overseas of this? Yes, that is the benefit of our relationship with the team Dimension Data. What they do, is they carry our brand and our story in the biggest cycling audience of the world. And then recently the boys, two years ago, we formed this association with ASO, with the company that owns the Tour de France and we are the official charity of the Tour de France. So, utilizing all of the resources that we have in South Africa and Africa. We really don’t have enough resources to address the problem. You’re absolutely right; we’re taking our story global and asking people for their generosity and their empathy to help us achieve the goal. We are now incorporated in the United Kingdom. In Switzerland we have  donation platforms and in the Benelux countries. We also have a platform in Australasia and in the United States.

So, do you find that the foreign audiences are responding?

Yes. I think in cultures where people see the benefit and buy-in to cycling. So, in most of the major cities in the world; there are more movements to leave the car and commute by bicycle. They are larger audiences who believe in biking and can understand the benefits of the bicycle to children in Africa. 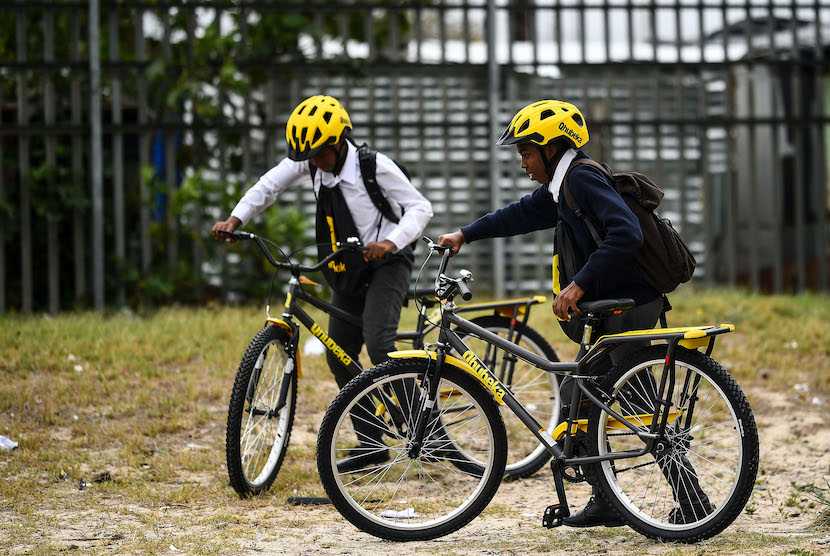 It may be an unintended consequence and I may be barking up the wrong tree but girls are particularly unsafe in South Africa; the rape statistics among teens in the country is horrific. Could your campaign lead to greater safety for girls?

Yes, it has and indeed it does. One of the big problems in South Africa is that here are very few girl-owned schools; so, most schools are co-ed. Boys and girls go together to  secondary schools and that’s what we focus on. We focus on providing a single bike to fit a child from the start of secondary school to the end of secondary school. If you need to go and focus on children that is smaller, you have to build a different bike. So, what we are trying to do, is focus on academic outcomes in that period of time. And it’s important for girls because that is pre-puberty, well going into puberty and then onwards. A lot of our donors ask us to focus on girls-only programs. But the problem is that if you have a school of roughly 50 percent girls and you only have girls  on bicycles, then boys start being jealous and their relationships with the girls could be that of a bullying nature. So, in order to protect the girls; we make sure that it’s both boys and girls and then the needs of those not in education, employment or training; the 65 out of 100 that fail and that are sitting in the villages and on the street corners. They get bicycles and then they perform the role of community patrollers to make sure that the girls can travel safely between the schools. It’s a difficult statistic to get to determine if it has actually reduced the number of rapes and gender-based violence. I don’t think we’ve got our arms around that yet.

But I think for sure, anecdotally, the girls tell us that they feel safe and they are safe. They’re less exposed. So, if they’re on the road walking for one to two hours outside of the vision of their parents and their friends; they’re covering the same distance in 15 minutes per hour. So, they’re exposed for a shorter period of time and then they can ride away. So, without a doubt. All of them, literally all of the children that we put on bicycles tell us that they are safer; they feel safer literally.

Is it acceptable in rural communities, are bikes cool?

So, we’ve been officially incorporated for 15 years and we’ve been doing this for more than 20 years. So, the one thing that I would like to convey is that there is no sort of single community. So, in South Africa we probably have about twelve different sort of major tribes and the culture is different from area to area depending on the culture of that tribe. And then it can go down to villages. So, it depends. There are lots of subcultures and villages behave differently. So, in some villages there’s an enormous adoption of bikes and in some there are concerns around bicycle seats compromising virginity. There’s no factual basis for that. It’s a cultural issue. And so those communities are longer to adopt bicycle than other communities. So, we try to work with communities that don’t have these issues and then adopt them quicker. And then that one village becomes a teaching community and the other is a learning community. So over 20 years, we’ve seen that change a huge amount. And that’s another reason why the race team is so important. So, the race team and children and girls racing on bikes have provided a lot of visual impact in dispersing that myth. 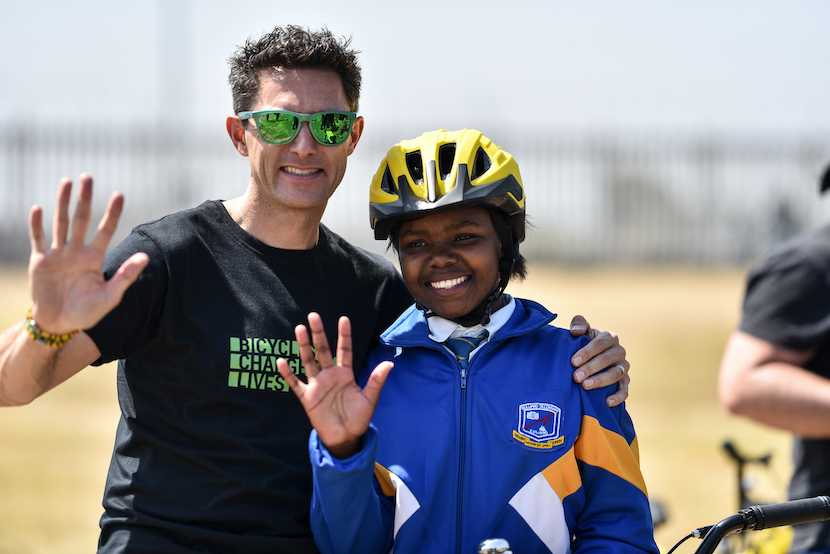 So, you’re planning to expand further into Africa as well?

I personally have done quite a lot of projects all over Africa. But we now have sponsors and donors to help us program in the rest of Africa and next year we hope to program in Morocco and Rwanda.

It sounds like a worthy program. Thank you so much and we hope we see your bikes eventually all over the country and all over Africa.

Thanks for speaking to us. You’re welcome and thank you very much.