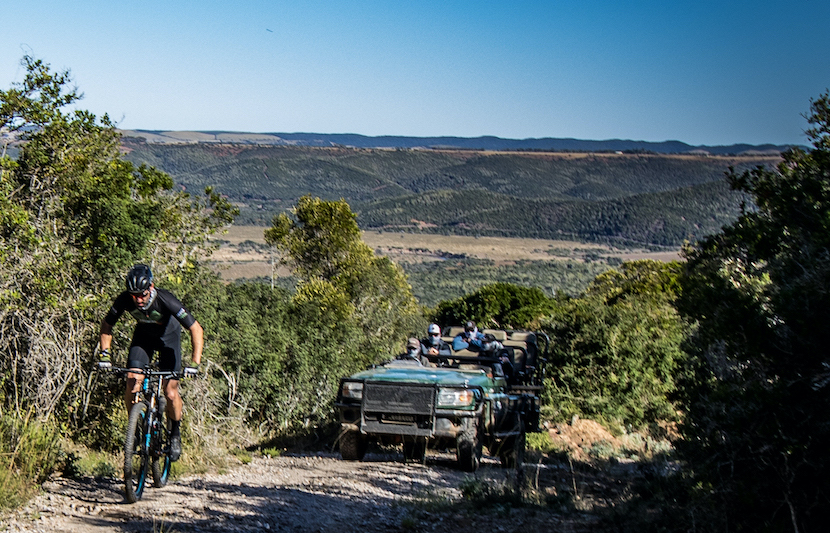 As the Covid-19 pandemic paralysed a number of industries across the country, one man took his love for extreme sports and put it to excellent use. After spending some time at the Kariega Private Game Reserve during the December holidays, extreme sports enthusiast Jamie Marais couldn’t stop thinking about the situation the Eastern Cape based safari park may be in. After making contact, Jamie decided to raise money for the Kariega Foundation by doing something incredible – riding his bicycle through the park for 36 hours and 337 km. – Jarryd Neves

The Covid-19 pandemic has brought out the worst of predatory South African politicians, but as the Director of the Kariega Foundation, Lindy Sutherland describes it, it also creates a shift in the focus of many people on what they can do for others, reports Linda van Tilburg.

One of them is Capetonian extreme athlete Jamie Marais, who teamed up with the Kariega Foundation to push himself through extreme discomfort and risk to scale a mountain several times and he became the only known person to cycle a vertical ascent of 9,000 metres, which is the height of Mount Everest in the Kariega private game reserve, over 36 gruelling hours in the middle of the Cape winter.

The aim was to raise money for endangered rhinos and to feed the local population around the reserve.  The poaching of rhinos in South Africa has dropped by 50% during the first half of the year due to the Covid-19 pandemic, according to government figures, from 316 in 2019 to 166 in the first half of 2020, but it is feared that poaching will pick up again as lockdowns are eased and borders re-open. Jamie Marais told BizNews about his quest to help the rhinos and the hunger that he believes, fuels the poaching of rhinos.

I always develop a talk after I’ve done a crazy record attempt or an ultra endurance thing. To quote Lindy Sutherland, “For me, it’s about what Covid-19 is creating in the world. A shift to people becoming more focused on what they can do for other people.”

I think that was really the basis of this whole project. I was having a glass of wine sitting in my braai room, thinking about the amazing time my family and I had at Kariega in December. I wondered how they’re doing as a result of lockdown and not having that big international base of tourism coming through.

Read also: What makes a great dinner party? It’s not the food & wine, it’s the conversation

I called them up and said, “What’s happening? You guys must be bleeding. Is there anything I can do to help?” I said, “I’ve got a crazy idea, but I’m not sure it’s going to fly because I don’t think anyone’s ever gone mountain biking for 36 hours in a game reserve between those lions and elephants.

Two weeks later we had the purpose, we had the whole structure – commercially – and off we went. The challenge involved getting onto a mountain bike and riding for 36 hours nonstop in the middle of the Kariega Big Five game reserve. This was in an effort to raise funds for the anti-poaching unit at Kariega – who are the guardians of the rhinos – as well as to feed the families of those affected by Covid in the surrounding area.

So you cycled for 36 hours on a gravel route up and down a mountain, which was the equivalent of scaling the 9,000 metres of Mount Everest?

Yes, that’s correct. I was hoping to achieve a lot more. I was aiming for about 16,000 metres. But the reality is that my progress was slowed down by a couple of things beyond my control. We had extremely cold weather, which really reduced me to a crawling pace through the night. But also, there were a lot of live interviews. There’s a filmmaker doing a documentary on what I did.

I probably spent about 15 minutes at the top of each summit and at the bottom with interviews. The interviews were necessary for the content that was going out to which people were responding. So I got to a point where I was okay with it.

Lose the battle, win the war. I’m not going to achieve the numbers I wanted to achieve in terms of distance and elevation, but that’s fine. I still managed to do 337 km with 9,000m of climbing, which is a formidable task in that environment, with elephants and all sorts of dangerous wildlife around.

Kariega is a 90 minute drive from Port Elizabeth on the east coast of South Africa.

The road that I managed to find was easy at the bottom but very steep and technical towards the top. My biggest concern was actually colliding into elephants, buffalo – or any animals, for that matter – while descending through the night.

My nerves were pretty shot by the time I got through the night.

Apparently there’s a bull elephant named Charlie that’s quite a presence there. Did you meet him?

I did. I had the privilege of getting his blessing. Almost by a tap on the shoulder from his trunk. The whole team was really worried. We had about 100 people on the team. All the rangers, the anti-poaching stationed at various intervals up the 4,5 km climb in an effort to try to keep wildlife out of the area. the elephants like to walk up the road. The anti-poaching unit was flying drones around looking for dangerous animals.

On the very first summit – five minutes up the road – this massive elephant just stops us dead in our tracks. There was a bit of an impasse for about five minutes. Then he moved off into the bush and we sprinted past.

How much money did you raise and what would it be used for?

We raised just over R400,000. The campaign is still open and people can still donate via Kariega’s website.

The money will be used for two specific purposes. Firstly, to fund the anti-poaching unit at Kariega because they have a number of rhinos on the farm. Secondly, the funds will be used to provide food for the communities in the area, through soup kitchens that the Kariega Foundation funds.

Jamie, this is not your first adventure. You’ve done a challenge before. Tell us about that?

I’ve done a number of different record attempts and extreme endurance challenges. I think the most notable and certainly the toughest one so far, was a world record attempt for the most summits of Table Mountain. I ended up speed summiting Table Mountain, a total of 22 times in 28 hours over two days – which was twice the height of Everest. That was to raise money for special needs kids.

The project was a huge success. I’ve also done a number of mountain biking challenges. I seem to have an ability to attract the worst possible weather around the time of the record attempts. I’ve had two life threatening challenges up on Sani Pass in South Africa – which is the border to Lesotho. During both of those challenges, I ended up riding my mountain bike for 12 hours up Sani Pass, which is ranked as the most dangerous road or mountain pass in Africa.

It’s higher than any climb in the Tour de France. You climb 1,000 vertical metres in only eight kilometres. You climb up to almost 3,000 metres in altitude. So it’s an extremely difficult and challenging climb. It’s loose and rocky. I ended up hypothermic the second time around in an effort to break my record of summits. That was really tough because we had torrential mudslides and downpours.

I always wonder what inspires adventure or extreme athletes like you. What is your background? What drives you to do this?

What drives me to do it is definitely my desire to help and inspire people to realise that nothing they’re facing is ever too big to face – when you’ve got the right people around you. I’m very conscious – and have been for the last couple of years – of the realities of what people are facing in terms of depression, addiction, financial and commercial realities.

I think it doesn’t really matter who you are. Stress is stress. My passion and what drives me in terms of these athletic endeavours is really just inspiring people to believe in themselves and realise that nothing’s too big to face. The challenges that I take on are metaphors for what people are facing in life. That’s why they’re all extreme challenges, because I want people in extreme circumstances to realise that there’s always hope for this situation, no matter how difficult it is.

You had some history of substance abuse in the past? How did you overcome that?

If Jamie Marais is going to go climb Table Mountain, he’s going to do it 22 times. So, you could imagine destructive behaviour. In my teens, I definitely overdid smoking weed. I took it to a whole new level and ended up in mind-altering drugs as I left school.

At the age of 19, I drew a line in the sand. I realised I was messing up my life. I always say that divine intervention comes in many different ways. For me, it was through a passion and love for sport and pushing myself athletically, which helped inspire me to get out of the bad space I was in.

I’ve also built up a very close friendship with Phil Liggett – the legendary Tour de France commentator – over the years, because it was his passionate commentary of the Tour de France that inspired me to stop taking drugs and to get back into cycling. I think what’s just so beautiful is that 30 years later, Phil Liggett himself narrates my extreme endurance videos and he was very involved with this project as the global patron for helping rhinos. It’s just incredible to have this guy who inspired me through difficult times in my youth as part of our project.

Well, it’s amazing that you turn it around for something positive and use that energy positively. If we look at the issue of rhinos in South Africa. What has Kariega found? Has the poaching gone down during the Covid-19 pandemic?

Yes, it has reduced in terms of just the presence of poachers. That’s largely because we have got powerfully armed rangers and anti-poaching units who guard and protect these rhinos. They are very pro-active in terms of patrols. What people don’t understand is that it’s hunger that drives poaching.

The guy that picks up the gun and shoots the rhino is not the end customer. He’s paying gazillions of dollars for rhino horn. He’s just a desperate person trying to feed his family. He’s given an opportunity and he takes it. So that’s why the Kariega Foundation exists and believes strongly in the importance of feeding people in the neighbouring communities in order to discourage the need for poaching not only rhinos, but any other animals inorder to survive.

Jamie, when you’re not dodging elephants and climbing up mountains, what’s your day job?

I’m actually head of corporate sales for an I.T and tech company based in Cape Town, which is quite ironic. It’s the extreme opposite of what I do. But I love my job. Even in my job, I’m able to help corporate businesses restructure their finance and their spend with us. I’m driven by knowing that what I’m doing is making a difference. It’s very important to me that everything I do does make a difference and helps people in some way.