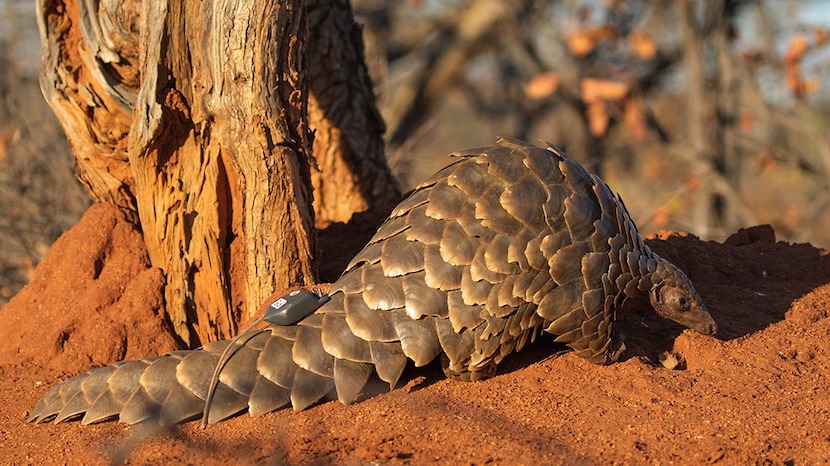 Pangolins have become among the most trafficked animals on the planet. Tons of pangolin scales are illegally trafficked annually from Africa to the Far East. Pangolins have risen to prominence during the Coronavirus pandemic as they were linked to the wet markets of Wuhan in China, the source of the Covid-19 outbreak. This link has resulted in the adoption of new measures by the Chinese government to protect pangolins, but there are loopholes. In South Africa, the African Pangolin Working Group has embarked on a project to return pangolins confiscated from poachers to the wild. They have been able to reintroduce Temminck’s ground pangolins in KwaZulu-Natal where they have been ecologically extinct for decades. – Linda van Tilburg

Pangolins, the scaly, secretive, nocturnal animals that have roamed the planet for 84 million years have become a threatened species. Three pangolin species have moved closer to extinction and have been placed on the Red List of Threatened species by the International Union for Conservation of Nature.

Two African pangolin species moved from the ‘vulnerable’ category to ‘endangered’ due to a 50% decline in 21 years. There is an unprecedented demand for their scales from countries in Asia where they are used in food and Chinese medicines.

Pangolin foetus soup can sell for as much as U$2,500 in some Chinese restaurants. But a concerted effort is being made in South Africa to stop poachers and to reintroduce pangolins to parts of the country where they have been ecologically extinct for decades.  The organisation behind that is the African Pangolin Working Group that manages to retrieve pangolins with the help of the security forces in South Africa. The Chairman of the APWG, who is also a professor in environmental, water and earth sciences at the Tshwane University of Technology, Professor Raymond Jansen told BizNews of their programme to reintroduce the endangered Temminck’s ground pangolin or the ‘ietermagog’, as it is also known in South Africa to Zululand where they have been ecologically extinct for more than 70 years.

The Temminck’s ground pangolins that are being reintroduced in reserves in KwaZulu-Natal, come out of the illegal wildlife trade in South Africa. Prof Jansen says they arrive traumatized and many have been without food and water for more than a week. They are taken into the intensive care unit of the Johannesburg Wildlife Veterinary Hospital and are then ‘soft-released’ where the APWG ensures they have sufficient food and enough ants and termites to feed on, as well as adequate shelter.

In the next phase of their release they sleep out on their own but are monitored and weighed twice a day for about three weeks. This monitoring process is eventually reduced, and they will be monitored for up to a year to make sure they adjust to their new environments. “We try and release them into areas where the Temminck’s population is very low as in Zululand and they are released into areas that form part of their natural distribution range.”

The APWG has partnered with two private game reserves in KwaZulu-Natal for the release of the pangolins. “The reserves we choose are exceptionally large reserves in excess of 20,000 hectares because these animals can travel long distances in quite a short period of time, and they have a number of threats they can face. For example, the electrified game ranching fences, they kill a lot of pangolins. Crossing national roads, vehicles kill pangolins and off course, they can undergo a reproaching event from people living in the region.”

There are dedicated teams on the ground and each pangolin is fitted with a satellite transmitter and a VHF transmitter to keep a close watch on them.  Prof Jansen said their focus was on Zululand, but they did have release sites in Mpumalanga and the Limpopo province and were proceeding with a fourth site.

The majority of pangolins that are poached come from outside South Africa’s borders, an estimated 70% are from Zimbabwe, 10% from Mozambique and Botswana and 15-20% from South Africa. “It’s largely through migrant labour that come into South Africa looking for work. And they are all of the belief that they can become very wealthy, very quickly with pangolins. This is similar to the problem that exists with rhino horn and elephant ivory. Their value on the illegal market is extremely high. Pangolins are approaching similar prices.”

Prof Jansen said the huge demand from Asia is trickling into Africa and poaching in South Africa “has grown exponentially in the last three years or so, mostly from destitute people looking to get rich quickly. I would say approximately 50% is opportunistic. In other words, a pangolin is found in a natural habitat somewhere, put into a sack, crosses the border and they try and sell it to any particular individual.”

He said the other 50%, involved organised crime, networks of wildlife trafficking syndicates that were already dealing with species such as rhino horn, elephant ivory, abalone (perlemoen) narcotics and other illegal substances.

With pangolins acquiring an unexpected role as a possible intermediate host that found its way into people from the wet market of Wuhan in China, the Chinese government has taken steps to inhibit the use of pangolins and pangolin products, “probably to save face to the world.” In a first step, the Chinese government will not refund medical claims that have pangolin products used in medicines.

In a second step early this year, “the Chinese pangolin has been lifted to a number one protected species. That’s the greatest protection they can give an animal. The giant panda is on the same level. It’s huge. The third and final step – which the Chinese government proposed recently – was that all pangolin products and their use in pharmacopeia and traditional Chinese medicine will no longer be allowed.”

There is however a loophole in that some of the products have been patented in China and the patented products are still allowed to be used. Prof Jansen said it, however, there has been a huge and gigantic step forward for the conservation world and pangolin species.

Pangolins are prized not only for their scales but also for their meat. Pangolin meat is a delicacy in Vietnam and pangolin foetus soup can sell for as much U$2,500 in restaurants in China.