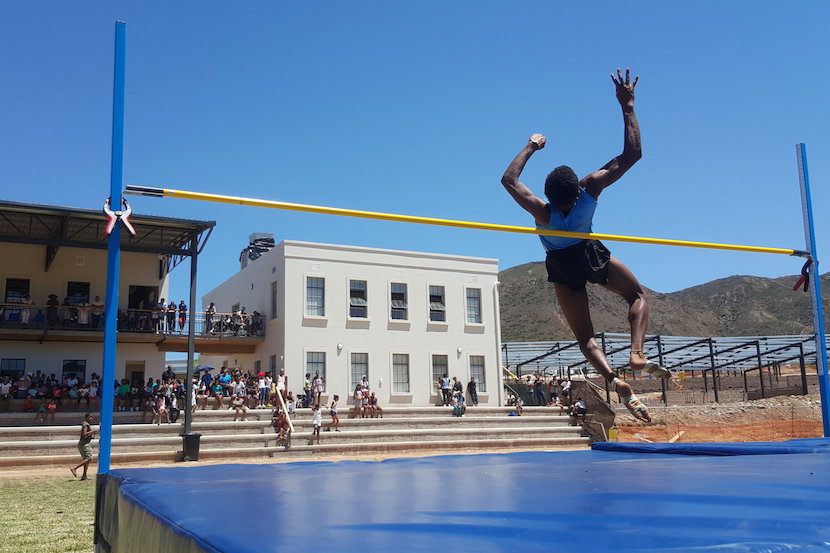 The official dropout rate at South African schools is between 37 and 42%. This is according to figures released in October this year by the Department of Basic Education. In many communities, this rate is much higher. Dropout rates used to be very high in Bonnievale, a small Boland community nestled between the beautiful winelands and mountains of the Western Cape. The community is plagued by alcohol-fuelled violence, broken homes, drug and alcohol abuse, teenage pregnancies and few opportunities. But the community, local businessmen and the Western Cape education department ‘willing to explore blue waters’ banded together to change this. Out of this they built a new school, called the Jakes Gerwel Entrepreneurial School. Philip Jonker, a wine farmer and the owner of Weltevrede Wines, who is one of the initiator of the project told BizNews how this three-stranded partnership came together to weave a chord that is hoping to pull every child in the area out of poverty and give them a future. – Linda Van Tilburg

We got this vision basically in 2016. We all knew of the need in our community, because we saw lots of young teenagers dropping out of school and some not getting placements in the local school. We were all very aware of it for many years, but the vision only really dropped in our hearts in 2017.

So, then you decided you’re not going to build a normal school, but this fantastic campus school and you donated the grounds for it?

We were a group from the whole community that came together, and some had experience in education. But people like me, I didn’t have any background in education. I’m a farmer and winemaker and I think my role in the team was to ask the dumb questions, question the status quo and the type of school, for instance, that we needed to build. Our vision was to create a zero-dropout school.  I think internationally that is a problem, learners dropping out of schools and that especially in our circumstances in South Africa, in a more rural setting. The chances for youngsters to drop out, is very good. So, we questioned the type of school that we needed to build, and we said we wanted to build a zero-dropout school, a school that is more entrepreneurial, that is more career focused, that could find a career answer for every person growing up in our community.

We were a group from the whole community that came together and some had experience in education.

Our starting point was really to create excellence because we wanted to restore self-worth before teaching them anything. That was basically our starting point. There was a long journey of exploration and we ended up building three schools – an academic, technical and high school going all the way up to matric. Students who are good at mathematics that want to become a professional engineer, can study here as well. But then, it’s also an agricultural school offering agricultural management practices and agricultural technology, combined with consumer studies in the training kitchen. So, it’s about creating or growing food from the soil onto the plate and then it’s also a school of skills. Pupils who may not be writing textbooks one day but are good with their hands. This is also an opportunity for them to become an artisan by doing welding or construction, maintenance and also food production in the kitchens or for the tourism industries.

What’s amazing about this is that the local Bonnievale community were really in favour it and everybody worked so well together?

Yes, we come from a background of division, and it’s just amazing how this enormous vision just pulled us all together. I think we were all so aware of the fact that we are totally out of our depth and we need to rely on each other. So, we got together, we prayed together. We got to know each other in the process. We start respecting each other for whatever little role each one had to play. Together we were in the front seats to see the miracle really playing off in front of our eyes.

I see even schoolchildren came in the beginning and picked up rocks to clear the area. Everybody dug in and knew this was a good project to be involved in.

We told everyone that this is a total community project, and we need to rope in every single person to come and help. We asked everyone, what are you capable of?  What can you contribute, whether it is financial resources or time and experience and some sweat? We gave everyone an opportunity to come together. On weekends we would come together just to help and pick-up stones on the future sports grounds and so on. In that way, we actually grew the unity by creating a picnic atmosphere and doing small tasks together.  It’s amazing how everyone just added a little piece to the whole puzzle. We also created an opportunity at our local supermarkets to buy a brick for R2,50, which is not much, but it meant that people could feel they have contributed in some form in building the school.

And the Western Cape Education Department helped as well and eventually you did come up with the money. So, what was their role?

We are partners of the Western Cape Education Department. I must say, being from the private sector, we are often very critical of how government works and how slow it works, the bureaucracy and so on, but we were so pleasantly surprised by the people there that have a passion for the future generation of South Africa. They really want to find answers and they are willing to explore blue waters as well and be innovative. They committed from the start in what we call a collaboration model to help fund the school and committed 40% of the cost to build the buildings and we had to find the 60% balance. It’s a significant contribution and it’s really amazing the way in which the private sector or the whole community actually could work together with the government in this case.

We are partners of the Western Cape Education Department. Being from the private sector, we are often very critical of how government works and how slow it works. but we were so pleasantly surprised by the people there that have a passion for the future generation of South Africa.

Do you think it’s a model that could be followed elsewhere in the country, this community-private sector-state involvement?

Absolutely. I think it’s the way forward for many things, whether you’re building schools or clinics or hospitals or whatever and it’s actually a model that should work everywhere. It’s like a three-stranded cord. Government can’t do things alone, the private sector can’t do things alone, and the communities can’t do things on their own. It’s really a combination. I think it should start from community, grassroots level. The community needs to be passionate about it and want to see it work and then government needs to be there to set the table for it. Business should become involved for everyone’s sake. No-one can prosper when your neighbour is poor and in this case, you shouldn’t be suffering due to a lack of provision of education or future opportunities, then everyone’s going to suffer. So, it’s taking each other’s hand and finding unity and working towards a common goal.

It’s called the Jakes Gerwel Entrepreneurial School. Why did you choose that name?

Jakes Gerwel is an amazing role model. One of the principles of the school was to create great role models for our leadership and teachers, because our community is suffering from a lack of role models and a lack of structure within families. Family structure and healthy families are a great focus for us. We think, these are the key things that will help to restore our community.  If there are fathers and mothers that are committed to raising their children.

Professor Jakes Gerwel was a great role model. He was a close friend of Mr. Mandela, but he had very humble beginnings. He grew up as the child of farm workers in a very small, labourer’s cottage in the Karoo in the Eastern Cape on a sheep farm. I think he was one of nine or 11 siblings who eventually all became very successful and Prof Gerwel was in the first administration of the democratically elected government of 1994, of Mr. Mandela and he was in that small group of people who work behind the scenes to really change South Africa.

In the business world, he was the chairman of Media24 and one of the the board members of Naspers.   He was really an amazing leader, but the greatest of it all was the fact that so few people knew that and that shows something about his character. He never did that to be seen and that is what we want to coach our future generation in our community and in South Africa as well, is to become world changers. Even if nobody knows about you, just do the right things.  So, he’s a great role model for us.

You’ve mentioned you wanted to be a zero-dropout school and how high the level of dropout is in the Bonnievale area. Can you just tell us a little bit about the socio-economic circumstances of people in that community?

Yes, I think it’s probably about 70% or so are really struggling, a very high percentage and I  think probably one out of two people actually live off government grants, they are not permanently employed. It’s an agricultural economy. It’s fairly brittle, it’s seasonal. It is quite a challenge for many people in our community and because of the lack of hope and the lack of future possibilities, people get involved with the wrong things.  Especially when you drop out at school, then obviously the chance for you to get involved with the wrong things, is good.

There is a high level of teenage pregnancies, addictions and alcohol and drug abuse and dysfunctional family structures. So it’s very sad but we are seeing the changes happening now. It’s very encouraging to have this hope that things that are changing and the next generation will grow up differently. We have managed to reduce the dropout rate to about zero at the school. Our next vision is to have zero unemployment.

So, we’ve also started an initiative in Bonnievale called Bonnievale 418 where we pro-actively look at opportunities to grow the local economy, to help every learner and every single one with the next steps after school, whether it’s direct employment, whether it’s further studies, tertiary studies, bursaries or whatever.  We don’t leave them when they leave school. We keep an eye on them and we want to create new entrepreneurs as well to start up new businesses and so on.  There’s a lot of things happening and it’s very exciting!

Do you also have the policy that even if you’ve left school, you are allowed to come back, even if you are a little bit older?

Yes, that is the principle of not being content with the 99%, but actually going for that one sheep that got lost.   We apply that principle. If they’ve been expelled from various schools or they’ve been out of school for two years, for whatever reason, we welcome them back completely. It’s a no-fee school, it’s totally inclusive, but it’s very smart.  It looks like a very high fee-paying school; its facilities are excellence.  We welcome them back with open arms.