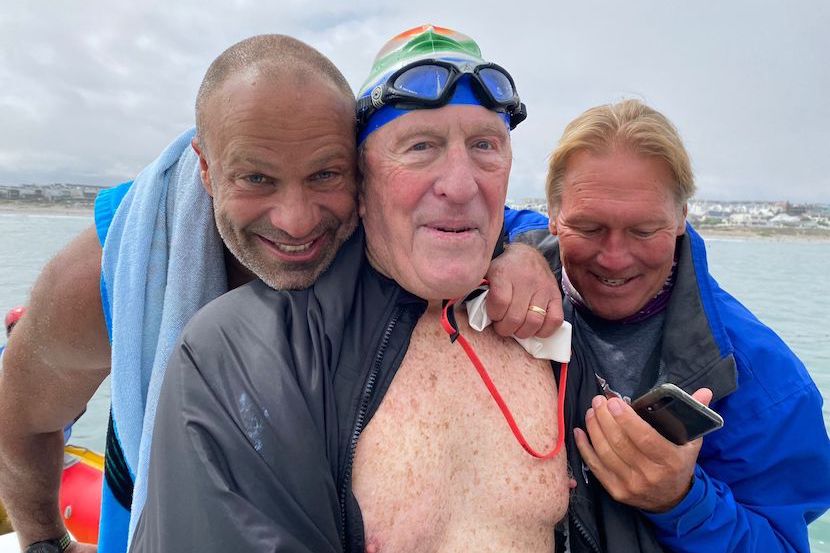 Dr Otto Thaning, a heart surgeon who trained under Chris Barnard, is used to swimming long distances in icy waters. It is not only the waters around Cape Town that he tackles; Dr Thaning still holds a record he set in 2014 as the oldest human to have swum across the English channel. Now, he has set another record by becoming the oldest person to swim from Robben Island to Bloubergstrand. Paced by Robben Island veteran Martin Goodman and supported by members of the Cape Long Distance Swimming Association (including veteran long distance swimmer Lewis Pugh), Dr Thaning crossed the 7.9km from Robben Island, across Table Bay, in two hours and 52 minutes. Dr Thaning told BizNews about his latest record and shared some of his secrets to a long, healthy life and career. – Linda van Tilburg

The initial part of that swim is difficult because you have to swim through a fairly dense kelp forest of about 100 metres, maybe 200, and then you get out to open water. There you are swimming in a northerly direction towards Blouberg – which is on the opposite side of Table Bay. It’s a suburb of Cape Town and there’s quite a lot of development. They have a very nice safety system with lifesavers and facilities.

The straight line distance for that swim is 7.4km. If you do the other swim – which is from there to Cape Town itself, it’s longer – it’s about 11.25km. The last one that you can do is to swim a complete circumference of that island. That makes it probably nearer to 14km. I’ve done all three of them.

It’s always cold because it’s the Atlantic. It does change with the winds of the season. It doesn’t get much warmer in summer. In fact, it gets a bit colder. The reason for that [is] the prevailing wind in summer in Cape Town is the South Easter. It tends to blow the warm water out of Table Bay and it gets replaced by cold, deeper water. The exact opposite happens on the other side of the peninsula where in summer, the temperatures are slightly reversed. There’s usually a four degree difference between Table Bay – where Robben Island is – and the False Bay, which is on the other side.

I think I have been genetically lucky. I’m a non-smoker, I’m not overweight, I don’t drink alcohol because I get sick from it. I believe in exercise and because of my profession, I also look at, very carefully, the things that are relevant to cardiac health.

If you do all those things in moderation – not in excess – I think you’re basically sharpening the pencil. But ultimately, your actual life span is determined by things that are greater than us. But you can certainly change it if you abuse yourself, add too much weight, don’t eat properly, and don’t exercise.

On swimming across the English Channel:

I believe my record still stands [as the oldest person to swim across the English Channel]. I must say, I’m also one of these people that doesn’t swim in order to do a record. It’s nice to be told afterwards that I was the oldest man to have succeeded – but it’s not the motivating factor.

I had swum the English Channel about 20 years previous to that, in 1994.  I was 53 at the time and I had a very good swim. They then told me that was one of the fastest swims of a person over 50 – which stayed for quite a while. Again, it wasn’t the intention. The intention was to swim when the conditions were good, the people and support were even better, and I wasn’t in a bad state. I’ve been very privileged in that regard.

On the challenges facing swimmers crossing the English Channel:

It’s the busiest channel in the world. As a result of that, there are very strict rules as to where you can go. It’s very much like drifting across a very busy airport in a small airplane. It’s very regulated. You can only do that with the care that they give you, to the pilot of the boat that’s helping you, from the Calais control and from the Dover control. The swimmer basically doesn’t have to bother about that. As my pilot said to me, your job is simply to swim next to the boat. The boat will take the direction that you follow.

On his career as a heart surgeon and training with Dr Christiaan Barnard:

It was a fantastic experience. [I was] extremely lucky. I was originally a graduate of the University of Witwatersrand where I did my general medical training. I immediately went into surgery and I spent six years being registered as a surgeon. During that time, I then elected to go further and was lucky enough to get a job working for him in Cape Town for the last 10 years of his surgical life.

He was a very difficult man to work with – but a highly intelligent man with tremendous ability. I think I gained and learned a tremendous amount. I think in a way, I played some role in the fact that the hospital group – that I then subsequently went into private practice with – the hospital was called City Park at the time. We were offered the name Christiaan Barnard Memorial Hospital when he died because he spent a lot of time with us at that hospital, because of the fact that we had all been a part of his unit up until he retired.

I still work as a cardiac surgeon, but I’ve cut down a bit now. I’m doing more assisting than direct surgery, but I’m still very active.