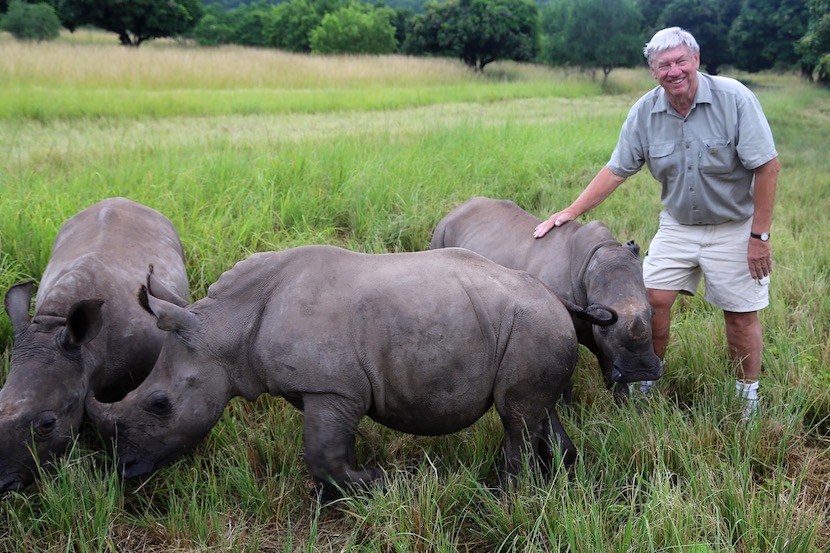 Despite millions being spent on rhino protection elsewhere in Africa and in South Africa, the number of rhinos in the Kruger National Park is reported to have dropped no more than 3,000, the lowest number ever. That is a decline of nearly two-thirds over the past decade according to South African National Parks (SANParks). South Africa holds the majority of the world’s rhinos and it is the country hardest hit by poachers. And while there is demand in the Far East, the situation remains dire. – Linda van Tilburg

I had resistance pretty much from everywhere. I had resistance within South Africa, I had resistance in Australia. Dealing with the South African authorities; I think they felt in some way that this was kind of a criticism of what they were doing or what they had done. They were less than co-operative in the first instance in terms of bringing the rhinos out here. In Australia, much the same thing. Certain people had this belief that, just as cane toads and camels have multiplied in Australia and are everywhere, the same would happen with rhinos. As soon as I explained to them the rhino has a gestation period of 16 months and drops one calf at a time; they realised that wasn’t actually an issue. So, there was a lot of resistance on both sides.

Rhinos around every corner in the Kruger National Park, says Environment Minister

She was a minister of the environment at the time [Edna Molewa]. Unfortunately, she’s passed away since then, but she was at a conference here in Sydney and I arranged to meet her in a conference room. I felt very lonely because there was one of me and there were 11 of them. She sat me down at the table and proceeded to give me a little bit of a lecture in terms of conservation and one thing and another, which is fine. And then she said, “Anyway, why would you want to move rhinos out of South Africa? You see rhinos in the Kruger National Park around every corner.”

I must admit, I stopped in my tracks, I thought: is she having a go at me, is she teasing or trying to put me off? To this day, I don’t know what the reason was for her making that comment. The truth was, it was not that at all. As you said in your introduction, it is critically worse than that, with 3,000 left in the Kruger National Park.

There are some strange rulings. I would have thought something like a rhino was a national asset. I mean, to me, it’s a national asset, an icon; it’s a national asset. But there are some rules and regulations that suggest one can get approval to move animals out of the country by going through the provincial system. So that is being pursued at the moment as an option. I know many people in authority higher up in conservation and probably in government – although one doesn’t get to hear that – are desperately concerned about the situation and are looking for alternatives to save the rhino. Just as an example, Botswana.

Moving rhinos to neighbouring country has been unsuccessful

About 80 or 90 rhinos were moved to Botswana in the last couple of years from KZN, which basically repopulated the rhinos in Botswana. I hate to say that probably 90% of those have been poached in the past 12 to 18 months. I think there is a realisation that finding a secure option is no bad thing. That’s my sense. You don’t  necessarily always get the obvious or the right answer when you have these discussions, but the plans are still afoot. And Covid-19 has really put a massive stop on this whole programme. But the plans are there, the rhinos are ready.

There are more rhinos in Australia than Botswana

We haven’t transported any under this programme. What a lot of people don’t know is that there are already probably 75 rhinos in Australia scattered around. I had a discussion with a chap who was, at that time, the Minister for the Environment from Botswana. His name is Tshekedi Khama, the brother of Ian Khama who was the president at that time and he asked me a similar question. I said there were probably about 65 rhinos in Australia and he said,  “You’ve got more rhinos than we do.”

This was crazy in many ways, but is the truth. They are scattered all over different safari parks.  None have been moved as yet on this programme. Covid-19 has really – it’s not an excuse it’s a fact – put a stop to that. I’m hoping that in 2022, once life returns to some form of normality, that the rhinos will be moved out. People say this is wrong, rhinos belong in Africa. Absolutely they do. If there was no issue here, I would willingly just quit this programme and raise a glass to celebrate.

Is Australia a safe place for rhinos – it’s close to the markets for rhino horn?

That’’s very true and, yes, it is a safe place. I’m on record as saying there is no safe place in the world for rhinos. As an example: some rhinos were poached from a zoo outside Paris. Now you don’t expect that. So, Australia is definitely safer than many other places in the world. One, it is an island. Secondly, the border protection in Australia is very, very strong and robust. This has been proven through Covid-19 because they closed the country and people cannot get in there. There’s no poaching as such in the country; not to say that couldn’t happen.

Where they plan to put the rhinos is pretty remote. So, the question is, how would the poacher get in? But more importantly, how would the poacher get out? Another thing is – again no criticism but it is true – the media is fierce. It really is. I think if just one rhino were poached, all hell would break loose and it would just be deemed unacceptable. Now,  that is different to the situation in Africa, South Africa and other Southern African countries where losing three a day becomes the norm. I think Australia is safer; there’s no place that is completely safe.

All eyes on 2022 to pull off a complicated project

The rhinos have been identified. I know the fellow who’s got them. He has a conservancy in Thabazimbi and he looks after a lot of rhinos. So, that’s where they’ll be sourced. They then go into quarantine in South Africa for a period – anything from three to six months – so they can identify any diseases. You have to select the rhinos very carefully to make sure that they’re breeding age because otherwise it doesn’t make a lot of sense.

Then they’ll be flown out to New Zealand. This is complicated because it has a different quarantine arrangement with Australia. They’ll spend a year in New Zealand in a safari park and then they’ll be shipped here to Australia. That’s the plan. It has been a long process. I was warned this would take a long time and I didn’t believe them. But that’s, I think, the South African way, but ‘n boer maak ‘n plan.’