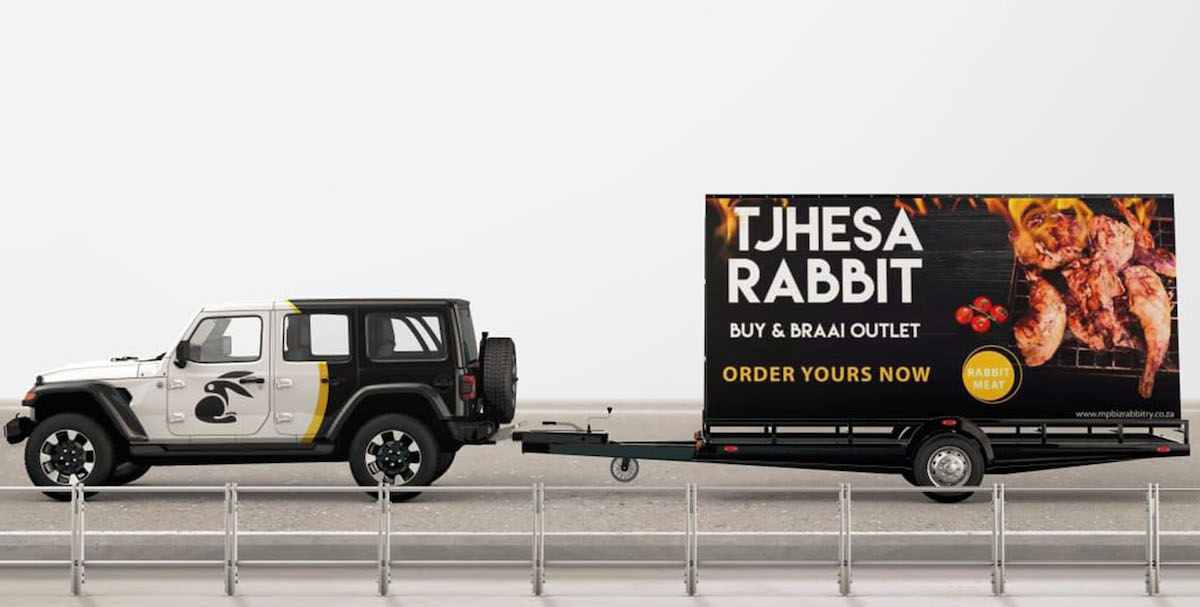 Rabbit meat is a delicacy in many overseas countries and ‘lapin’ in stews is a particular favourite of French chefs. In South Africa, it is not something you often see in a supermarket, but consumers are slowly acquiring a taste for it and overcoming the idea that they are eating something cute. Daisy Moleko, the founder of MPBizRabbitry, a company that mentors and supports rabbit farmers, wants to change meat consumers’ perceptions about rabbit meat and is on a quest to promote it as a healthy alternative to red meat. Moleko, who runs a restaurant in Soweto and has released a cookbook, told BizNews how Gauteng premier, David Makhura, became a customer.  – Linda van Tilburg

Rabbit farming is a niche business in South Africa

I did a lot of research and development based on rabbit farming because it’s a new thing in South Africa. We don’t have a lot of rabbit farmers; we are only a handful. I started to do a lot of research into how to market the needs and who’ll eat it and how to farm because you can’t farm something that you don’t have a market for.. I started to do workshops, the farmers paid me, and I re-used the money in my business. That’s how I started my business.

A lot of people, when they know about the health benefits, want to eat the meat. I normally say, I sell benefits with experiences. You come in, explore our restaurant and find out what rabbit meat tastes like. We also do agro- processing of the rabbit meat, [including the manufacturing of sausages].

The liver of rabbits is a delicacy, and the meat has health benefits.  It is a white meat that is high in protein, omega-3, vitamin B-12 and minerals like calcium and potassium which is beneficial for people with heart problems, diabetes and arthritis. So, it is very lean and low in cholesterol 3. So, when you start telling people about all those health benefits, they start eating rabbit meat. It’s tender and easy to chew and to digest.

We pitch it at a high level, middle class consumers, people who can afford Nando’s meals between R150 and R180; our prices range from that. But we don’t only want to target that group and say this is a niche market or meat eaten only by certain people. We want to target everybody.

A cookbook and a restaurant in Soweto “near Mandela’s house”

I had to bring in the concept of a cookbook because when people bought the meat, they would ask how to cook it and we would send them recipes. So I collected all those recipes and put them in a book. It includes how to make ‘wors’ – we process our own ‘wors’, we make our own samoosas, our own pies and pizzas.  We present all the different ways to cook rabbit in our cookbook.

The nice thing about our restaurant is in Vilikazi Street, Soweto, not far from Mandela’s house and Desmond Tutu’s house. So, it is in the street for the tourists coming into South Africa.  And then also we have our online store where we sell the raw meat and an online restaurant as well. We are on Uber Eats. We can deliver the cooked meat, even the raw meat but only over short distances, but for the cooked meat we use Uber. And then we also sell at places like car washes, buy-and-braai places and we supply a lot of restaurants.

A partnership with seven farmers and safety standards

We partnered with seven farmers in seven provinces because we don’t have to buy land – we can use their land. So, we’ve partnered with farmers saying, you have the land; we have the concept, let’s work together and see how we can grow this. They became our growers. They breed for us, and we teach them how to. We have our online platform where we share the IT with them, because they have to pay for the courses, and then we give them their livestock so that they can go and farm. This way we protect the bloodline and the quality of the meat because we test our meat regularly to ensure it is good. We do have safety procedures and work with the abattoir so it will give us an abattoir certification to say this is healthy meat and it hasn’t found any bacteria. From feeding to grading the rabbits, we control the process.

The Gauteng Premier as a customer

David Makhura visited my stall, and it was the first time that he ate rabbit meat and now he is a regular client. He is introducing other people to eat rabbit meat as well. He’s going to assist us to acquire a farm to breed rabbits, but negotiations are still ongoing; it hasn’t been finalised.

Getting over the idea that you are eating somebody’s pet

I have often been told, but you are eating somebody else’s pet and I’ve said: but even a chicken is my pet. To me, a chicken is my pet. So, it’s the same. But by all means, we are trying to change the mentality, because every day we educate our consumers, every day we educate people, we use media to educate people to eat rabbit because any animal can be a pet. Not only rabbits are pets.

How ‘breeding like rabbits’ leads to the easiest farming commodity

Rabbit farming is the easiest way to farm a commodity. A female rabbit’s pregnancy is 31 days and then it will give birth to six or up to 12 babies. Sometimes it can give you 14 babies.  So, it’s easy to manage them because once they give birth, their mortality rate is normally 1% to  2%, less than 5%. It’s a very lucrative business if you do it correctly. In our research we wanted to find out how to farm. What are the challenges? What are the weather conditions for rabbits?  If it is extremely hot; how do we keep them cool ? If it is extremely cold; what are the measures that we’re taking to keep them warm? They have a thick skin. So, the weather conditions must not be extremely cold or extremely hot.

You don’t need much land because we put them in cages and we stack them up. So, what we normally say to people is that you can start farming in the backyard of your house, but you need to control the breeding and the number of rabbits that you breed.

A dream for rabbit meat to become the equal of chicken

My dream for rabbit farming is to get 1 million South Africans or Africans to eat rabbit meat. Before we can even export the meat, they must know about it. We are not saying now we want to compete with chicken, but we want the same percentage of people to eat rabbit meat that eat red meat. You opt to eat pork or beef or mutton. You have a choice, and I would love rabbit meat to become one of the best meats available on household menus. It is a healthy alternative. I would also like to get funding to expand and grow our business.