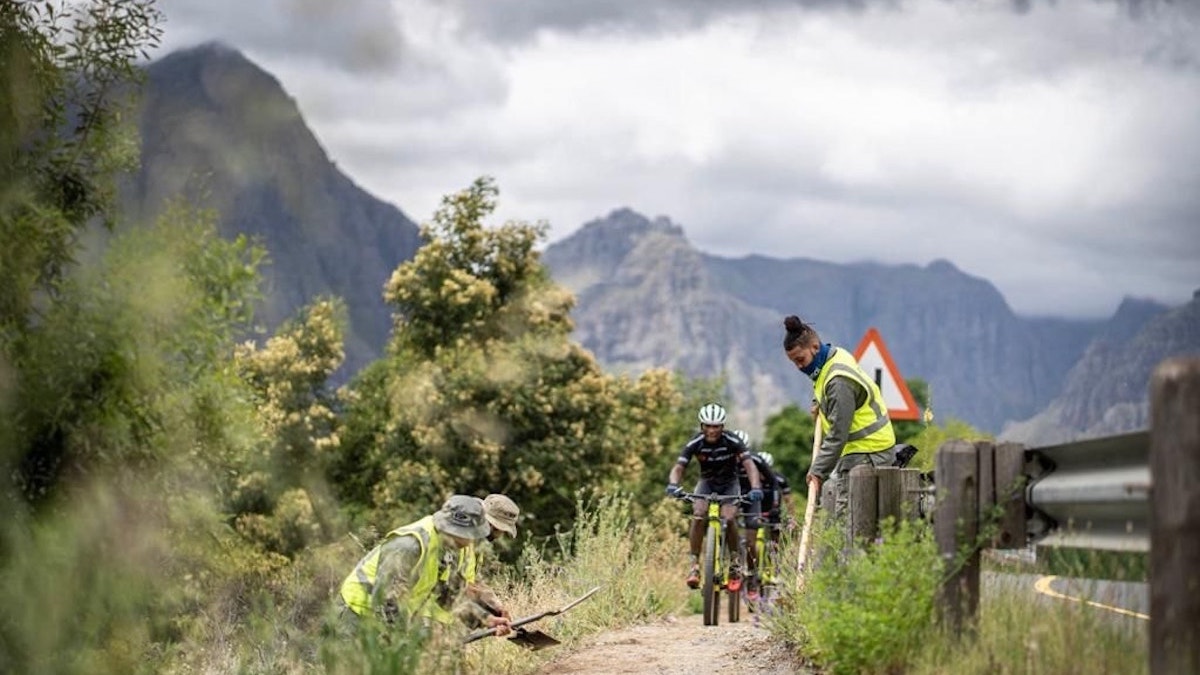 What started as an initiative by SA Trails Network, a non-profit organisation connecting mountain biking trails in the Cape Winelands, has developed into a project that not only benefits cyclists but all the communities in the area, especially the school children who have to brave dangerous roads to get to school. The Founder of SA Trails Network, Reghard Goussard, told BizNews that it is a perfect partnership between the private sector, communities and the government – has saved lives and made a major difference to people in the area in less than a year. Goussard said future plans would involve linking first the Western Cape trails and then the 22,000 km of hiking trails nationally to create a super network of trails. – Linda van Tilburg

It’s been but nine, ten months now and back then, it was a very simple, call it a small community initiative, where we thought, well, let’s connect the disconnected mountain biking trails so the mountain bikers can cycle from their homes to get to the private trails which are predominantly on the farms. So, that’s how the idea started. Then when we started connecting these trails using a network of community trails, which are basically between various towns like Franschhoek, Stellenbosch, Paarl and Wellington; we actually realised that the trails are already in existence, but they are not necessarily formulated and they also are not connected to various other trail networks. So we started connecting these trails in the communities in June last year, and realised that there are thousands of kids on these trails on a day-to-day basis but they weren’t formulated or necessarily clearly demarcated.

So we came up with the idea to actually go and we carve these trials within the communities and we give it specifications: 1.2 metres wide, which allows an adult plus a child to walk next to each other, or allows two people to cycle next to each other. We wanted to create a safe passage. A big part of it was that we wanted to get people off the road shoulder.

On a day-to day-basis, we’ve just done a survey. We’ve got about four-and-a-half to 5,000 kids a day on our trails, allowing mountain bikers to cycle safely from one area to another and giving them more than 20, 30, 40, 50 kilometres that are safe. You can now basically walk from Stellenbosch right across to Helshoogte Pass without going onto the road once –  into the Kayamandi community, into the Bonnievale community, into the farm shop community from Franschoek; you can go all the way along Simondium. It’s probably one of the most dangerous and fast roads in South Africa or within the Winelands. And you can go from Franschoek to Paarl without having to cross the road or having to actually go out on the tar once and risk your life. What’s very rewarding to know is that six months ago, we had a couple of incidents on the roads. You could see these little graves and flower arrangements next to roads for kids and people getting knocked over. For the last six months, we haven’t had one specifically because of the access that we’ve given people off the road, off the road shoulder to the road reserve. In some areas you are two metres away from the road and some areas you are between ten and 15 metres away from the road which gives people a lot of excitement around the fact that they are walking in nature and they are walking safely without having to worry about the next oncoming car or taxi or somebody overtaking, or big trucks, or anything of that nature.

Very quickly we realised,it is actually a means to support the community. And what we’re doing now with these guys is we are uplifting the community. So, we source the actual trail buillders. We had over 100 during mid-2021 when we were actually building the trails and we uplifted these guys. Then we are educating them in terms of the skill sets required to build these trails and now they are very well equipped and we can call them rangers. We’ve got 12 permanent rangers roaming our trails. They are assisting the municipality by keeping the trails clear of alien vegetation and they’re also helping the municipality in terms of picking up the litter and rubbish. So, it’s like a perfect PPP, which is public/ private participation. We’ve got the municipality, working together, the minister working together,  and obviously the private sector, because the trails do connect all the beneficiaries. The beneficiaries are the coffee shops and the restaurants and hotels and the Airbnbs and the wind farms and all the other adventure tourism in the mountains.

From ranger to tourism guides

We’re training them and this is where government has been great because there are various government educational programmes. We’re also giving the guys skills development. We’re doing educational programme in terms of the environment; we’re doing educational programme in terms of security and safety. The guys are on a weekly basis attending workshops that are funded by government, sponsored by government. So, I’ve got at least 12 guys at least 5 to 8 days a month that attend workshops at various departments in government, which is just magical. To introduce you to some of these guys six months ago, they could hardly speak; they’d just lost their sense of purpose. They’ve lost a sense of belonging, they’d lost their position in society, and they were really struggling to articulate themselves. I’ve got this beautiful story when I approached one of the guys about two weeks ago on the trails. I just stopped and I said, ‘Hey, Adrian, how you doing, my skollie?” and he turned to me and said, ‘No, Mr Goussard, I’m not a skollie anymore. I’m now a ranger.” That to me was just incredible to hear because that’s really what it’s about, because now they’ve got a sense of purpose. They take pride in what they do, they’re being educated.

What we’re working towards is that we want to educate these guys and get them trained as actual official tourism guides. So, by the time that they are one, two years into this programme, we uplift them, we educate them, and then we want to deploy them within the tourism sector as official guides within the communities so people can approach them and say, ‘Hey, there’s a ranger, let’s go up to the ranger to ask him what’s happening in his region and that ranger can then take you into the community. They can take you to Tant Sannie’s vetkoek, they can take you to the waterfalls or to the ruins or into the reserve and talk to you about the alien vegetation versus various kinds of conservation aspects of the reserves. And that’s ultimately what we want to do.

Then what we did is, we said, okay, well, if the proof of concept works, which was phase one, then let’s connect the whole of the Winelands. The Winelands has about 600km of private trails. So we had to build 68km of trails to connect the private trails with each other. We now have over 600km of trails connected with 42 bridges which we built, wooden bridges to a design and engineering specification. What we want to do as phase two, which we are busy raising the funding for, is to connect 6,000km of trails in the entire Western Cape. We want to go, for example, from Paarl to Wellington, from Franschoek to Villiersdorp, from Stellenbosch to Somerset West, from Somerset West to Durbanville. And once we’ve done the whole of the Western Cape, which is 6,000km, we want to go national. So, nationally recorded there are 22,000km of trails. We want to connect all of that so we’ve got one super SA network of trails connected with each other that not only benefits communities and connects disconnected communities because that’s the beauty of this thing.