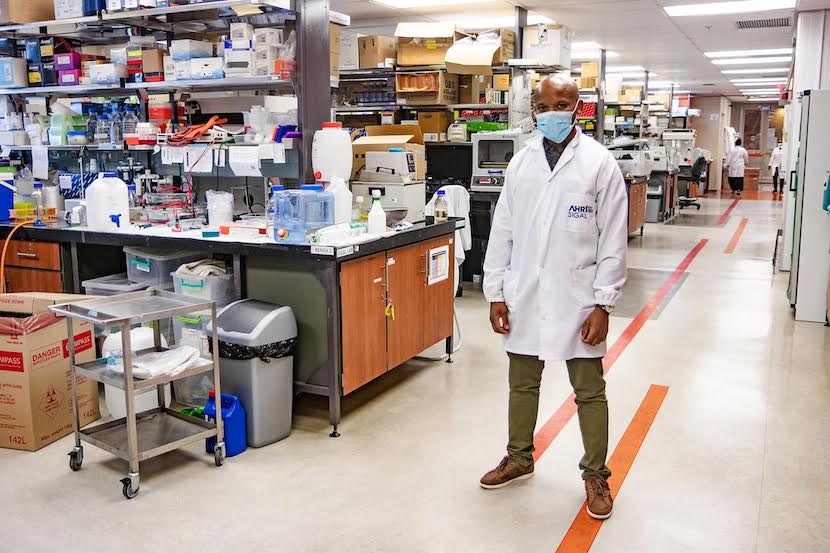 In this episode of Inside Covid-19, we speak to Sandile Cele, a 32-year-old researcher at the Durban-based African Health Research Institute who has made global headlines for an important breakthrough in the fight against Covid-19. Cele found a new way to grow the 501.V2 variant and in so doing, reports the Financial Times, helped show scientists that the variant can escape antibodies and lead to reinfection. Also in this episode, we hear from our partners at Bloomberg about how pharma companies are racing to retool their vaccine strategies as fast-spreading and potentially dangerous mutations of the virus emerge. Plus the Covid-19 headlines – and an update on vaccine roll-out from Discovery’s Adrian Gore. – Jackie Cameron

In a Business Insider report, Discovery Group CEO and founder Adrian Gore agrees with the SANBS conclusion, saying that South Africa’s sky-high “excess” death number indicates that more than 50% of population had already been infected with COVID-19. Based on the excess death rate, Discovery estimates the country’s true infection rate must be above half of the population.

“The number of people who have been infected in our view is probably over 50% of the country. This pandemic has had a traumatic effect on people, on the economy. You have to fight it with everything you can,” Gore said in a statement published on the Discovery website.

“I need to stress the importance of helping to make the national rollout a success, given the scale of the pandemic and its tragic impact. There have been over 2.3 million deaths globally, and approximately 120,000 excess natural deaths in South Africa during the period of the pandemic – most of which are almost certainly attributable to Covid-19.

We have also experienced the tragic Covid-related deaths of almost 5,000 Discovery Health administered scheme members, and of 12 of our own staff. We are acutely aware of our responsibility in this pandemic and the crucial role we need to play in ending it. I assure you that we have not and will not shirk our responsibility. In this context, we are often asked why we don’t just procure the vaccines ourselves for our DHMS members, and rapidly vaccinate them. There are two important constraints that make this narrow approach problematic.

First, there is a global shortage of vaccines, and the pharmaceutical companies manufacturing the vaccines will currently sell only to national governments, and not to any other entities. Second, there are specific risk factors that make some people more susceptible than others to severe illness and death should they contract Covid-19. This means that to be both fair and effective, the vaccination programme must be planned and implemented at a country level, according to a schedule that prioritises high-risk individuals first, and matches appropriate vaccines to at-risk groups according to clinical and scientific guidelines.

Not following this process would mean low-risk people get vaccinated before the clinically vulnerable, resulting in unnecessary illness and death. This cannot and should not happen. Ensuring appropriate clinical prioritisation across the nation is therefore critical. We need social solidarity; but in return, we need to make sure that this coordinated approach is implemented as quickly and as effectively as possible.

In this regard, I want to assure you of Discovery’s deep involvement in these processes. We have been working closely with the National Department of Health (NDoH), Business for South Africa, Business Leadership SA, and other stakeholders, on many aspects of the national vaccination programme. Our team has been involved in supporting the population analytics, research-supported procurement processes, distribution planning and system development that has been taking place.

We have been engaging directly with several of the key vaccine manufacturers since Q3 2020 and remain in active contact with them. Should their position of selling only to governments change in the near future, we will rapidly engage with the NDoH to agree on a role for Discovery and other private sector players to become directly involved in procurement and distribution.we are optimistic that the priority groups identified for early vaccination will receive their vaccines during the first half of 2021.