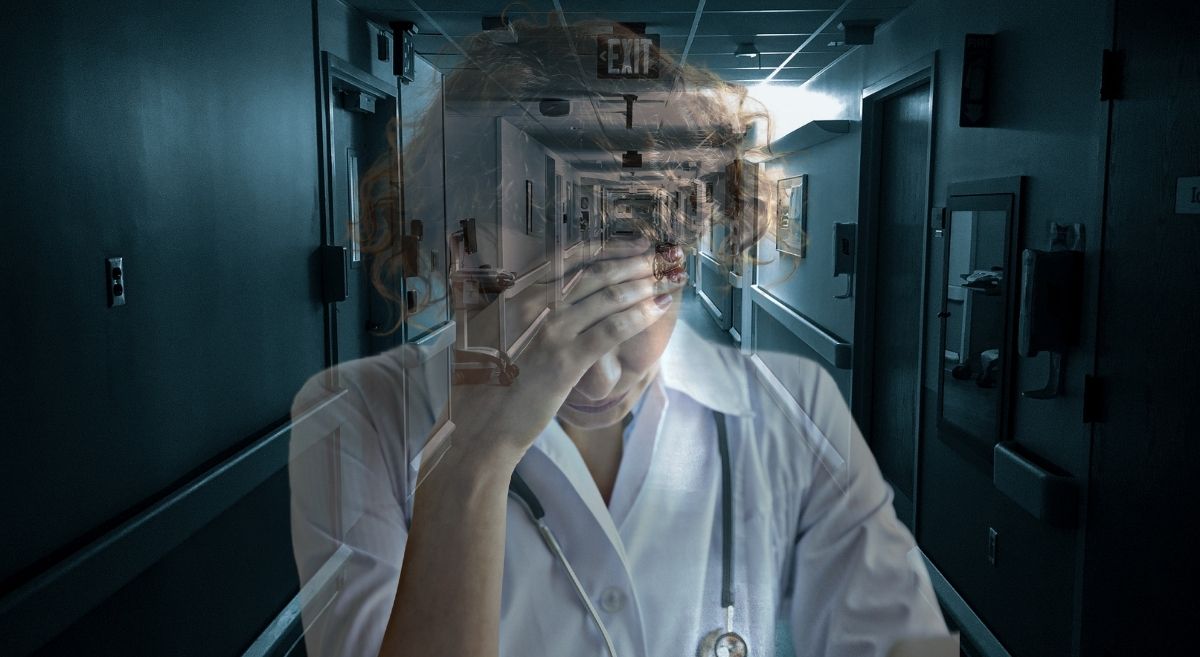 The situations occurring in South Africa’s public healthcare system in this article by Chris Bateman, veteran health journalist, read like the ingredients of an insidiously disastrous dish. From being abused by psychotic, aggressive and violent patients, the witnessing and treating of victims of dehumanising violence and critical sleep deprivation, there’s no wonder that EM physicians “consistently score the highest among all healthcare disciplines on the Maslach Burnout Inventory, which measures frequency ratings of emotional exhaustion, depersonalisation and personal achievement”. At the same time, it’s no surprise that these conditions prime EM physicians to be globally sought after. That being said – as the situation stands – burnout may eventually leave no one willing and/or able to take care of citizens, both in and outside of South Africa. This article first appeared on MedBrief Africa. – Nadya Swart

In a society fraught with violence, trauma and disease, SA’s thinly spread, routinely exhausted front-line emergency medicine (EM) physicians are burning out from the rising volume of challenges. Their trials are uniquely different to any other healthcare discipline.

Says Dr Amitabh Mitra, clinical manager of the Cecilia Makiwane District Hospital Emergency Unit in Mdantsane township outside East London until April this year, “Unfortunately, nobody’s yet quantified the number of emergency healthcare workers who’ve succumbed to or suffered from burnout, but it’s serious and way overdue; particularly among our youngsters.”

EM physicians consistently score the highest among all healthcare disciplines on the Maslach Burnout Inventory, which measures frequency ratings of emotional exhaustion, depersonalisation and personal achievement. In the UK, employers are required by occupational health law to prevent physical and mental ill health among their workers. South Africa’s occupational health and safety legislation requires employers to maintain, “as far as it is reasonably practicable”, a working environment that is “safe and without risk to the health of its employees”.

Doing this in SA’s emergency healthcare setting is nigh impossible, although several pragmatic interventions that would lower EM healthcare workers stress levels are feasible.

While they already organise shifts around known high-pressure days and times and less dangerous travel times, mandatory breaks and shifts of shorter duration remain elusive owing to workload. Dedicated work and resuscitation areas for various patient categories; recognition of the demands on medical shift workers in the commuted overtime system; plus more and better trained junior staff to perform skills-appropriate tasks are top of their wish list.

EM physicians spoken to by Medbrief Africa agree; 65% of their work is outside of ‘normal’ hours versus 25% of work for most other disciplines being outside of normal working hours. This remains unrecognised. Dr Rik de Dekker, a paediatric cardiologist at Red Cross Hospital – who often attends to EM patients – summed it up, “All other specialities arrange dates for well-known patients for specific appointments and procedures.”

All the EM physicians interviewed work at State district hospitals (four in the Western Cape and one in the Eastern Cape), with most caught in a vicious cycle of work, sleep deprivation and social isolation, with little time to recharge their batteries.

District hospital emergency units serving mainly low-income drainage areas handle on average 3,000 to 3,500 patients a month, with a single EM physician sometimes treating up to 20 patients over an 8–12e-hour shift. Besides the blood and guts and often-chaotic work pressure, each staffer reported daily verbal abuse and at least once-weekly physical abuse, mostly by inebriated or substance misusing patients and/or ironically, people least in need of urgent treatment. While the profile of presenting patients differs from unit to unit, mental health problems, often driven by substance abuse, emerged as highly prevalent.

The doctors report being regularly bitten, kicked, punched and urinated or vomited on while dealing with distressed patients suffering from a variety of life-threatening maladies that require quick-thinking and highly efficient triage.

Says Dr Sebastian de Haan, of Victoria Hospital’s EM Unit in the Cape Metro (who suffered burnout in 2014), “It can be chaotic. In one hour, you can have a psychotic, aggressive and violent patient, then one with hemorrhagic shock about to die, then one in heart failure struggling to breathe, followed by a child with severe gastro and dehydration. Sometimes this can even be in the space of half an hour. You try and manage. Then you have staff who’ve called in sick plus all the admin. It gets pretty stressful.”

The more recent waves of Covid-19 patients struggling for breath – particularly the death of a woman whose daughter was unable to get access – proved particularly traumatic. He lost his own mother to Covid-19 in August last year.

“After regularly working more than 12-hour shifts, many right through the night, at 4–5 am, I would inform some patients I was becoming cognitively impaired and give them the option of either being treated by myself or waiting to be treated by a less sleep-deprived colleague coming on shift shortly. Some were OK with it, but others asked for somebody else.”

Adds Dr de Haan, “It’s the juniors I feel most sorry for. We try to protect them. Often when I ask them how they’re doing after a particularly difficult event, I see tears in their eyes; then I know they need help.”

Compassion fatigue is real. When doctors get irritable with patients, they face every doctor’s nightmare of becoming abusive and contravening the basic medical principle of: ‘First do no harm.’ (Also, the link between burnout and adverse events is well documented in medical literature.)

The emergency doctors agree that a ‘short fuse’ is often a clue to impending burnout.

Veteran first responder and chief of disaster medicine for the Western Cape, Dr Wayne Smith, advised colleagues faced with difficult or belligerent patients to, “Take a step back and not rise to the bait or allow the anger to impact. At the end of the day, we do more harm to ourselves and our careers.”

Responding to colleagues citing helpful interventions as appointing more plentiful but less qualified EM doctors; a change to staffing norms for shifts; capping work hours; plus the danger of putting juniors off EM for life, he said:

“I like the ideas, but by capping hours, you don’t reduce the soldiers on the floor because the patient pressure stays the same. The last thing we want is unsupervised juniors. There’s nothing worse than handling a complex case when nobody’s got your back. Also, when I examine postgraduate diplomates on EM, I see the numbers increasing every year, sometimes with 100 people wanting to be examined for the Colleges of Medicine Diploma on primary emergency care,” he added.

The doctors said a major training anomaly was that EM registrars rotated through all the other departments but most other specialties did not rotate through the EM department. This resulted in an institutional lack of empathy and understanding of the difficulties they faced.

Dr Smith said most after-hours EM workload was anti-social stuff coming through and putting pressure on facilities. “Then we have the reality of co-presenting (patients arriving with more than one condition), after hours, because during the day they have other responsibilities.”

He said the Western Cape Health Department had a sophisticated wellness programme in place for its staff, though Marika Champion, director of communications for the department admitted that voluntary access to it by public sector doctors was lower than desired in some areas.

She said, “Because of the veracity and frequency of what these emergency centre guys deal with, they probably need a specific kind of intervention and it will probably have to come from them. We’re committed to finding workable solutions tailored to staff needs, but the actual problem is outside the health facility.”

Individual counselling, debriefing and group therapy was available for all employees in EM, and she advised them to access these.

Dr Smith urged his colleagues to conduct vulnerability assessments in all planning meetings, and to reassign patients to less-stressed colleagues. He compared EM physicians to airline pilots whom he said could be operational only for a stipulated number of hours.

Dr Roger Dickerson, head of EM at Somerset Hospital and a critical care sub-specialist, emphasised the EM was one of the youngest of all SA’s registered specialties (second only to sports science), with the first registrars qualifying only in 2007/8.

He added, “Almost by definition, two-thirds of EM physicians’ working hours will be outside of normal hours. There’s not enough catering for that. The main state sector difficulty comes down to the hours concept.”

His worst hour was on 7 May this year, when urgently summoned to a fracas in a ward above his unit where a prisoner-patient had just shot and killed three people, having snatched a policeman’s side-arm. A nursing sister, Di Seale, famously walked up to the shooter, hugged him and calmed him down before persuading him to agree to sedation and disarming him.

Recalls Dickerson, “When I arrived, the nurses had dragged the critically injured policeman around the corner into a theatre where I worked on him. It shook the hospital – and me – to the core. Mainly because it took away and violated that safe space. Seeing the trauma didn’t faze me but the violation did,” he added.

Khayelitsha Hospital’s ‘acting’ EM chief, Dr Elaine Erasmus, had to think hard to single out her most traumatic incident over the past four years.

“Last year, a whole family was gunned down, the dad died on the scene, but the children and mum were brought to us. What stood out for me was the children having seen their father gunned down. The mum, shot in the chest, narrowly survived and her five-year-old boy was also wounded. It hit our junior doctors hard,” she recalls.

“Then there was a bakkie carrying five kids that crashed on the N2. All suffered horrific-head trauma. We had four doctors handling critical kids. It was good to see the whole hospital in Red Box mode, all running to the site of the resus.”

Recently punched in the face by a belligerent patient, Dr Erasmus, who regularly drives the crime-ridden streets home and to work in the evening or early morning, puts her mental and physical health down to “a solid family life, walking on the beach or mountain on my day off, and my faith”.

“I’ve been supervising juniors for four years and can see the impact on them. Some flourish in the shift system and others flounder. It’s very dependent on set times and planning with a rolling roster. They struggle with sleep patterns, can’t get to the gym and cannot plan,” she added.

Khayelitsha Hospital’s EM unit has the world’s highest recorded heart stab wound survival rate, (75%) – recorded in 2014 – 60% above the international survival norm. Dr Erasmus said at least eight such cases were resuscitated and transferred for surgery last year, with an average of one per month saved so far this year.

Professor Heike Geduld, head of Emergency Medicine at Stellenbosch University, said South Africa’s EM specialists were globally sought after, yet “current working conditions may push them out of the local health sector”.