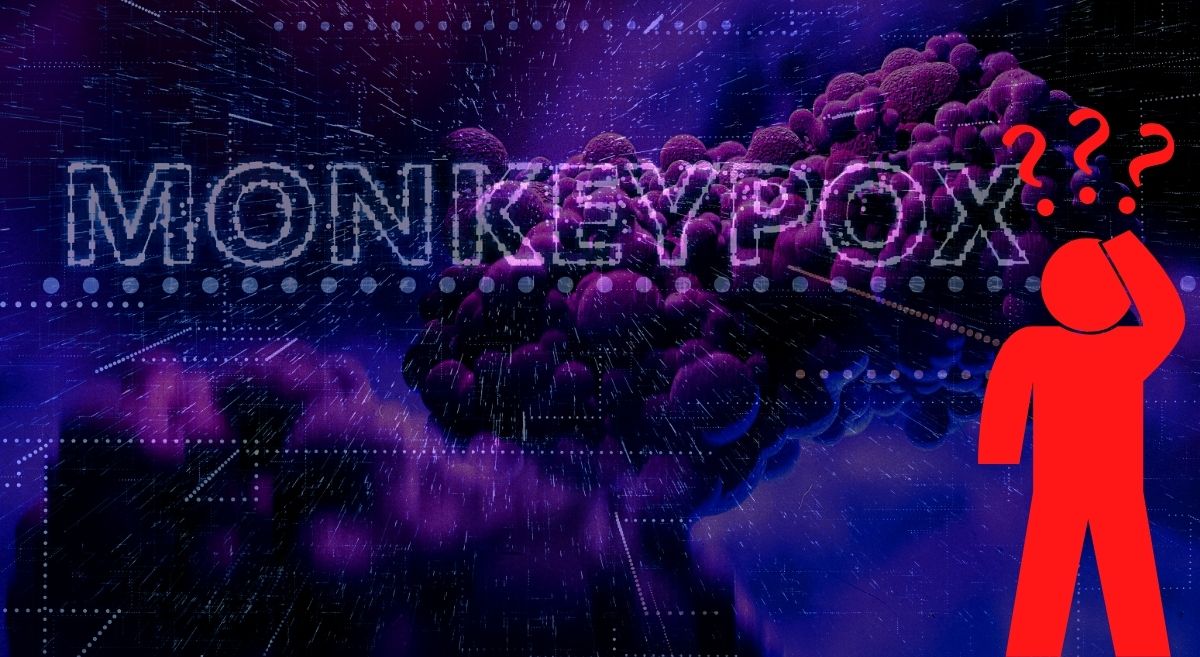 According to the National Institute for Communicable Diseases (NICD), Monkeypox was first discovered in 1958 in Denmark when two outbreaks of a pox-like disease occurred in colonies of monkeys kept for research. Hence the name ‘Monkeypox.’ The first case in humans was recorded in 1970, in a 9-year-old boy in the DRC. Given that the disease is endemic to several Central and West African countries, it is understandable that the word ‘Monkeypox’ did not even form part of most people’s vocabularies until very recently. At the beginning of May, however, the disease transversed its long-standing geographical abode, with the World Health Organisation reporting a cumulative total of 257 laboratory confirmed cases and about 120 suspected cases on 26 May. As is evidenced by the graph below, South Africans were not perturbed by this ‘outbreak’, with Google trends indicating that citizens prioritised their search for Monkeypox over Covid-19 for a period of only two weeks before returning to the status quo. Whether or not there is, indeed, cause for concern, this article by our partners at The Wall Street Journal answers some simple questions about the new addition to our vocabulary . – Nadya Swart

Monkeypox Outbreak:What we know about symptoms, vaccines and how it spreads

Cases, which can include a rash, have been reported in the U.S., U.K. and Canada; outbreaks rarely occur outside West and Central Africa

The first  Monkeypox outbreak was detected in the U.K. Since then it has been reported in at least 25 countries, including the U.S., Canada, Spain, Portugal and Australia, according to nonprofit data platform Global.health. Monkeypox is rarely found outside certain parts of West and Central Afric in the U.S., cases have been confirmed across 11 states, according to the Centers for Disease Control and Prevention.

Here is what you need to know about the disease.

The viral disease that circulates mostly among rodents in parts of West and Central Africa was first discovered in 1958, when two outbreaks of a pox-like disease occurred in research monkeys, hence its name.

The first case in humans was recorded in 1970, in a 9-year-old boy in the Democratic Republic of Congo. Most cases since have been reported from rural, rainforest regions of the Congo Basin, although the illness has been detected in several countries in West and Central Africa. Nigeria, for example, typically reports a few dozen cases a year.

What are  the symptoms?

Early symptoms include fever, headache, muscle aches, backache, swollen glands, chills and exhaustion. The incubation period   -the number of days between exposure and the first signs of symptoms – is six to 13 days but it can be longer, according to Sylvie Briand, director of epidemic and pandemic preparedness and prevention at the World Health Organisation.

A few days after experiencing the first symptoms, a rash similar to chicken pox usually appears, beginning on the face  before spreading to other parts of the body. The rash eventually forms scabs, which later fall off.

How does a person get Monkeypox and how contagious is it?Monkeypox isn’t spread easily among people. Most cases in West and Central Africa arise from contact with an infected animal. People are thought to be contagious only when they have the rash. It can be spread from person to person through close contact, such as touching clothing, bedding or towels, the skin, or through the coughs or sneezes of a person with the Monkeypox rash.

While patients recover within a few weeks in most cases, the disease can be deadly. Studies in Central Africa have estimated death rates from the virus at as much as 10%, with the highest fatality rates among young children. Another “clade,” or family of the virus, from West Africa is considered less severe, with a fatality rate of around 1%.

Health authorities haven’t disclosed which clade was detected in the U.S. case, but the U.K. has said that at least four of the nine cases detected there were  the milder, West African clade.

The fatality rate of Monkeypox outside Africa isn’t well understood, given the small number of exported cases that have occurred. Tom Inglesby, director of the Johns Hopkins Center for Health Security, says he would expect the fatality rate to be lower in the U.S., because of the level of care available.

Still, state officials could see serious infections in more vulnerable groups, including children, pregnant women and people who are immunocompromised, according to WHO’s Dr. Briand.

How is Monkeypox treated?

In most cases, doctors try to relieve patients’ symptoms, including by caring for the skin, administering pain relief, treating secondary bacterial infections if they occur and providing psychological support.

In severe cases, an antiviral that is aimed at smallpox can be used, according to Dr. Inglesby. That treatment, called tecovirimat, was used to treat a case in a man who had travelled from Nigeria to Dallas in 2021. Another smallpox treatment, called vaccinia immune globulin, can also be used in severe cases, Dr. Inglesby said. The U.S. keeps doses of both in a national stockpile because of the potential for smallpox to be deployed as a biological weapon.

Is there a vaccine?

There is no specific Monkeypox vaccine, but vaccination against smallpox—a closely related virus—has been shown to protect against the disease. Data from Africa suggests that the smallpox vaccine is at least 85% effective at preventing Monkeypox, according to the Centers for Disease Control and Prevention.

Routine smallpox vaccination hasn’t occurred in the U.S. since that disease was eradicated in 1972. However, countries continue to stockpile smallpox vaccines for defensive reasons. A newer smallpox vaccine, made by Bavarian Nordic A/S, is also approved by the Food and Drug Administration for Monkeypox. Bavarian Nordic will make more doses of its shot, called Jynneos, in the coming weeks and months, according to Chief Executive Paul Chaplin.

The company has received calls from dozens of countries inquiring about doses of its smallpox vaccine amid the unusual outbreak. Stocks of Bavarian Nordic’s shot are currently limited.

Public health experts who advise the CDC recently recommended the Jynneos vaccine for use in healthcare workers in contact with people with Monkeypox.

What are the origins of the latest Monkeypox outbreak?

Researchers are still looking for answers. Scientists in  Portugal, Germany, Belgium and the U.S., have begun sequencing samples from confirmed cases and shared their findings online. Scientists from Portugal’s National Institute of Health said in a post on a virology research-sharing forum that similarities between the viral genomes from 10 cases detected there—and one from a patient in the U.S.—appear to suggest that the outbreak had a single origin.

Still, health officials and infectious-disease experts have said that more sequences would be required to gain the full picture, and contact tracing will need to stretch back six weeks prior to a positive test because the virus can spread weeks before a person feels unwell and exhibits symptoms.

Epidemiologists are looking back to cases in Africa, particularly in Nigeria, for clues to the virus’s recent spread. Officials at the Nigeria CDC were alerted in September 2017 to a suspected case of Monkeypox in an 11-year-old boy, after nearly four decades without a case. Dozens more suspected or confirmed cases were identified in the following weeks across the country.

Has Monkeypox occurred in the U.S. before?

Yes. Isolated cases in people who have travelled from the affected regions have been reported, including two in 2021. In 2003, some 47 people in six Midwestern states were confirmed or suspected to have caught Monkeypox from pet prairie dogs that had been exposed to imported animals. None of tese cases went on to infect other people.

The CDC has so far confirmed 21 cases of Monkeypox across several states, including New York, Washington, California, Georgia and Colorado, among others.

U.S. health officials have found that Monkeypox cases are concentrated in specific communities. At least 16 of the U.S. cases were people who identify as gay, bisexual or men who have sex with men, according to the CDC, although Monkeypox isn’t considered a sexually-transmitted infection, the agency has said.

Should we be worried about an outbreak in the U.S.?

For the average American, the concern should be low, according to Dr. Inglesby. Monkeypox doesn’t spread quickly from person to person. There is also a tool available-the smallpox vaccine -to contain any outbreak, should it be needed.

President Biden said the U.S. is looking into the availability of vaccines that could help prevent the spread of the monkeypox virus. “It is a concern in that if it were to spread, it would be consequential,” he said.

This article may be updated.