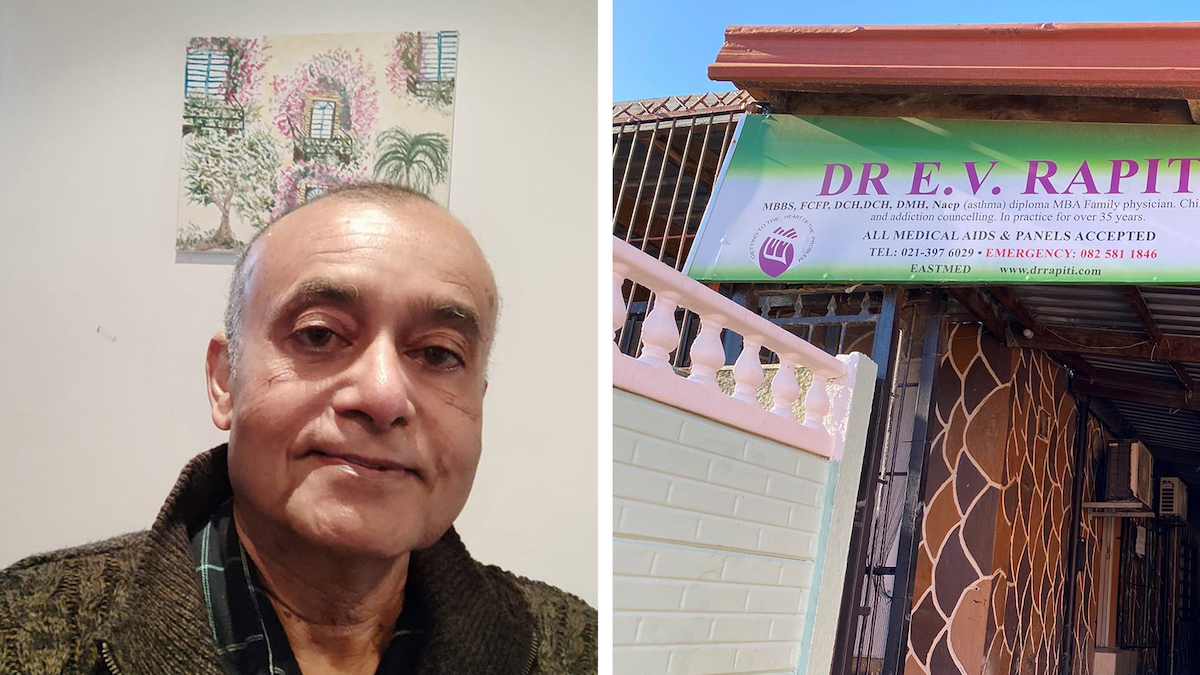 While Dr EV Rapiti is largely known as a family physician, over four decades of frontline healthcare experience and his insatiable drive to keep up to date with medical advancements have made him a uniquely qualified medical generalist. Over the last two-and-a-half years, Dr Rapiti personally treated approximately 3,000 Covid-19 patients with a significantly high success rate. He ate, slept and breathed Covid-19 while mainstream media engulfed the world with – in Rapiti’s view – incorrect information intended to scare. In an interview with BizNews, he said with conviction that “nobody should have died of Covid” as proper, early management of the virus could, and should, have been implemented to treat patients with Covid-19. He also takes an unsparing swipe at Professor Salim Karim, Big Pharma and the official narrative which, on principle, Rapiti refused to follow, instead opting to do whatever was necessary to save his patients. – Nadya Swart

Dr Rapiti on his credentials and being a generalist doctor

I’m a family doctor. I’ve got a postgraduate degree in family medicine. And I am an avid student. I still study and read every day. I keep up to date because what I learned 45 years ago is redundant. In fact, it’s wrong. I’ve got a mental health diploma, a diploma in children’s health and I’ve got a diploma in asthma. Asthma is one of my special interests.

And then to understand health economics, I did an MBA in health economics. A family medicine degree is a lot different from general medicine. People don’t know what it is. It is supposed to be a very holistic approach. It’s very specialised. It’s something like being a specialist, but in a multitude of fields. So, I didn’t confine myself to any particular field.

On the prohibition of Ivermectin as treatment for Covid-19

It’s all about finances, because Ivermectin is a kneecap injury to Big Pharma. The company who manufactured it was MSD. It was so good a drug, so safe for river blindness – they donated it to the African continent. They made it very cheap. It was a two dose thing. And when they lost the patent, they didn’t bother about it and then a generic was made.

There was a time when MSD was given, I think, half a billion US dollars, if I’m not mistaken, by the US government to develop molnupiravir. They knew they were the originators of Ivermectin, they were going to have stiff competition. So they did everything to discredit Ivermectin.

There have been 4 billion doses used of this drug. There were only 250 deaths, which could not be ascribed to ivermectin, because when it kills the worm, you could get an anaphylactic reaction. And it’s been very safely used. And countries like India, Uttar Pradesh, have a population the size of the US with 240 million people. They went on a trip of giving it out freely to control the pandemic. When you don’t have a vaccine or you don’t have a proper drug or you don’t have any preventive measures, you’ve got to treat it. If we treated people [with Ivermectin], there’d be no complications. There would be no need for a vaccine.

On the relationship between Big Pharma and researchers, professionals

Funding comes from Big Pharma, and this is where the irony comes in. The FDA is supposed to monitor the conduct behaviour and the drugs of Big Pharma. But when Big Pharma is 80% your funder and half of your scientists in the FDA come from ex Big Pharma, what do you expect? Do you expect something honest coming out of them?

Excess deaths are becoming a big issue. And the question we’re asking is why isn’t the government saying, “Hey, why are young people dying?”

The spike protein of the vaccine has a lipid nanoparticle which is extremely toxic, which carries the vaccine spike protein to every organ in the body, any organ, and it’ll travel there. So you’re going to get a double attack: the side effect of the nanoparticle and the spike protein. So when it gets into the brain, it can cause neurodegenerative disorders. And there are so many cases where people now talk about Creutzfeldt-Jakob’s disease, which is another degenerative disorder. It’s one of the worst, and that’s coming from your vaccines.

I don’t get that many patients with vaccine adverse events, because people don’t know where to go. They don’t know what to do. But I’ve treated about eight or ten of them. Two of them had complete blindness. One of them had Bell’s Palsy. The other one was trigeminal neuralgia in a pensioner. And trigeminal neuralgia is where you get severe pain on the side of your face, either side.

Professor Karim is not a clinician. I don’t think he’s touched one patient either, from the way he wrote his affidavit. I could see clearly that he doesn’t understand medicine at all. All he knows is germs. He looks at things under a microscope. I touch and see people. He doesn’t know the meaning of quackery. I’m a practitioner. I’m a very academic person. I read, I write a lot. He didn’t do his research. He’s using his words rather loosely. I’ll forgive the little boy, because he is sort of arguing my point. He attacks the man.