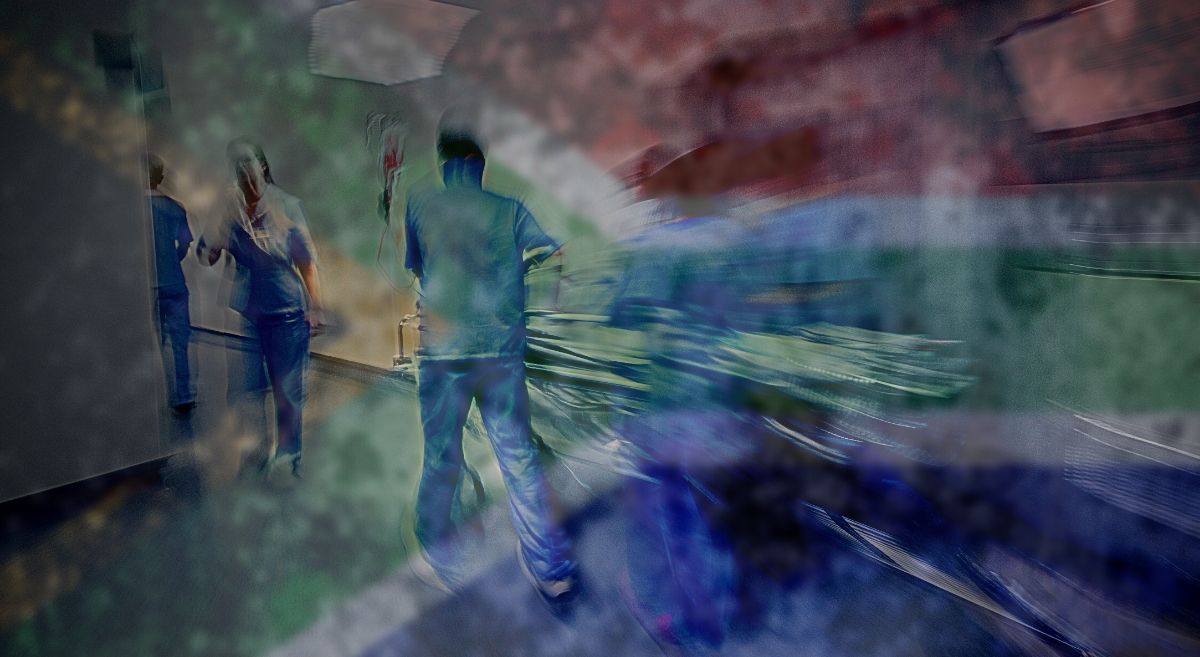 The state of public healthcare in South Africa has been particularly volatile in 2022, with the past year seeing an exodus of 35,000 practitioners from the country, particularly specialists, and predictions of more emigrations before the National Health Insurance comes into effect. Covid-19 further decimated the healthcare workforce in the country, as a reported 1,500 healthcare workers succumbed to the virus and the pandemic left a mental health crisis in its wake. This article by veteran health journalist Chris Bateman outlines the ways in which the pandemic “exposed the ugly underbelly of South Africa’s divided and dysfunctional healthcare system”. How far from complete collapse is the health sector in South Africa? This article first appeared on MedBrief Africa. – Nadya Swart

With an estimated 326,000 excess deaths and 1,500 healthcare workers having died due to Covid, some of them leaders in their fields, the pandemic has exposed the ugly underbelly of South Africa’s divided and dysfunctional healthcare system.

This was the consensus among panelists discussing how to get to grips with a post-pandemic South Africa at the annual Hospital Association of South Africa, (HASA), conference held at Century City, Cape Town on August 1st and 2nd.

Aptly themed “celebrating resilience through collaboration,” the gathering of top hospital groups, academics, analysts, and a smattering of public sector delegates, highlighted the triumphs of collaboration between the two healthcare sectors and lessons learnt during our two-and-a-half-year Covid ordeal. However, it also sharply focused minds on what still needs to be done between public and private hospitals in caring for the forty-five million of South Africa’s 60 million people who have no medical aid. As population growth outruns both services and scarce human resources in a tsunami, (quadruple burden), of disease, the Covid-19 pandemic has left the nation’s healthcare workforce depleted, traumatised and hastily consolidating while retarding a response by dysfunctional public sector governance and management that is crippling healthcare delivery to a restive nation.

Gift of the Givers founder, Dr Imtiaz Sooliman, fired the opening salvo by appealing to private hospitals to take in more non-medical aid patients, (without overly offending their shareholders), while Sister Mande Toubkin, manager of the Netcare Foundation, singled out “compassion failure,” as a major contributor to the slow pace of change in a historically divided country.

Sooliman said that when Covid hit, South Africa initiated the world’s longest lockdown to protect the healthcare system, while oxygen ran out, healthcare workers were brought in from overseas and Covid infections soared, unabated. Gift of the Givers put 10 Covid testing teams into the field at the end of March 2020, helped erect triage tents outside hospitals and procured vitally needed PPE and oxygen via 20 000 CPAP machines. All of this in spite of government initially insisting on ‘memorandums of understanding,’ and various time-consuming bureaucratic agreements.

“We said this is an emergency – eventually they said, ‘do what you want.”

“In 48 hours, we delivered 600 CPAP machines in the Eastern Cape. People were dropping dead at home, in car parks or admitting rooms. We sent food to fourteen hospitals in the Eastern Cape. We don’t have civil unrest in SA because people are hungry, (alluding to the July 2021 KwaZulu-Natal anarchy) – if that were true, it would have happened a long time ago. Children die from malnutrition every day in South Africa. They are so used to hunger they don’t understand when they need to go to hospital. Kids in some regions of the Eastern Cape, where we put R5 million into nutrition programmes, can tell you the taste of every wild plant near their homes. They eat rotten food and come to us barefoot and bare-chested, not having eaten for days,” he said.

Sooliman, who received a standing ovation, said Covid had merely exposed the underbelly of healthcare delivery in South Africa. He made a special request to private hospital groups to re-examine their pricing structures, saying they could bring up to ten million more people into the medical aid system and take pressure off the overburdened public sector.

“Yes, there is corruption, but not everybody in government is bad. There are those who want to do the right thing. There’s a huge shortage of skills and too many have their own agendas and needs, but you could bring your costs per patient down from about R26,000 to R5,000. Just look at the Rahima Moosa Mother and Child Hospital in Johannesburg – that’s now off the grid completely. We need private hospitals to come in and make space available like they did during Covid. Oncology, orthopaedic surgery – public sector waiting lists are years long – many patients can pay cash. For every patient you take off the grid, it’s a life-changing experience,” he said.

Panellist Mark Heywood, co-founder of the Treatment Action Campaign,  Section 27 and now editor of the Maverick Citizen, wanted to ‘dispose of the notion of post-pandemic,” saying this would be a long time coming.

“We have a decimated healthcare workforce that we expect to just get up and move on. My experience and encounters with doctors and nurses reveal a high level of unacknowledged trauma or PTSD. We must tend to them to rebuild and strengthen. Our national plan on human resources for health has been sitting with no action for two years while we haemorrhage staff. The rate of HIV infections is slowly picking up again, we have a rampant TB epidemic – nobody is quantifying the mental health pandemic linked to Covid. Professor Slim Karim, (former Ministerial Advisory Task Team chief and veteran Aids researcher), recently mentioned the tsunami of illness that accompanies Covid-19 infections. We have Long Covid, increased heart disease, its fuelling diabetes, the list goes on,” he said.

Alluding to the economic crisis, which public health specialist and deputy Director General of Health, Dr Nicholas Crisp, later told delegates was partly responsible for the dearth of specialist doctor and nursing posts, Heywood said that with South Africa spending a globally handsome 8,5% of GDP on health, “there’s a lot of money sloshing about in the system. We need to target it properly to get the best results and then replicate those. Right now, the biggest problem is governance and management – and the allocation of money,” he added.

Professor Michael Sachs of the Southern Centre for Inequality Studies and a lead researcher on fiscal policy and public finance, said there had been, “a huge collapse” in testing and other medical activities during the pandemic.

“It’s HIV, and TB, and surgery. So, we’ve backed off building up and we’re now unwinding these backlogs. The system is recovering from the shock and trauma while the government is planning to implement the largest physical solution in the healthcare system in the last 25 years (the NHI). We’re cash rationing. Most public health departments run out of money six months before the end of the year. We say, ‘who can I afford not to pay? We have to pay our frontline workers, while the NHLS (National Health Laboratory Services), has been moved to the front of the queue, as have essential medicines and equipment. But when you look at what’s left, there’s no investment in the future, in maintenance or upgrading. So, you end up with a serious collapse like the (fire hit) Charlotte Maxeke Hospital in Gauteng. Imtiaz (Suliman) is right, we’ve lost our moral compass and need to reclaim it.”

Heywood described the collapse of the post-blaze Charlotte Maxeke hospital as symptomatic of the wider national malaise. “How do you pay a CEO R1,67 million a year not to walk the corridors and not know the fire-readiness of their hospital? It was a disaster waiting to happen,” he asserted.

Sachs said that at the height of the Covid pandemic, some 400 people in the behavioural sciences and another fifty vaccine distribution experts in the private sector helped out “because we all knew that if we didn’t do this, people were going to die. We need to learn from that. Unfortunately, government pulls the legal levers, regulating how we do business. I agree that if a corporate is anti-competitive and simply seeks profits and rent at the expense of the national interest, they need to be made an example of. But when business and government sit down to talk, they must include others. Otherwise, we get into this multi-lateral wheel spinning that takes no decisions and gets us nowhere. We need to be talking about how we can work together in the national interest while still enabling business to be sustainable. The problem is not that the public sector is failing, the problem is that we are a divided society,” he stressed.

Cas Coovadia, CEO of Business Unity South Africa, said, “We’ve learnt what we already knew. It made stuff uncomfortable and brought inequality into focus. The economy is still in a parlous state. We still need to create an environment for investment and for the private sector to play the role it can in the national interest, while remaining profitable. I think it’s possible. “

A spokesman for the Health Minister, Dr Joe Phaahla, said from Montreal, where Dr Phaahla was attending the international Aids conference, that Dr Dhlomo had recorded a keynote video message which was unable to be broadcast due to a technical hitch with the HASA IT system. Dr Dhlomo had been in Benoni at the time attending a World Breastfeeding commemorative event but had ‘been ready all along as he values the role played by all stakeholders in the health sector.”